The Witch of Hebron: A Review.

The Witch of Hebron is James Howard Kunstler's second in the series of books started with A World Made by Hand.  The setting is (way) Upstate New York, after a post-peak, post-war, post-terrorist-nuke collapse.  I am reviewing what I think is the better of the two books within the series. 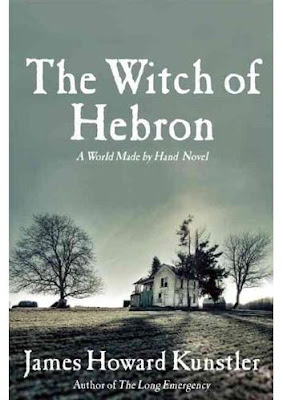 As the second in the series it has less deep background as to the route of collapse.  It covers the near background (first book information) fairly efficiently.  Thus it seems to move a bit quicker than the first book.
The first book was a cosy’s cozy.  You have the slow strangle of peak oil, the climatic problems of global warming, a sprinkling of nukes to take care of the big cities, and a convenient off-screen flue to efficiently pare down the population.  People plot gardens. The formerly stressed out executive (an alter ego of sorts of the author) uses his hobby  to become a carpenter-cabinet maker, and his other hobby to play in a much sought after folksy sort of band, marries a young just out of her teens (hot) widow, plays around with a (hot) friends wife, gallops around like a latter day Wyatt Earp shooting some bad guys out side of the saloon (or whatever it was) in Albany, NY, and generally just has a fine time.  There is a weird Christ-like martyr scene at the end, but he is saved from destruction by the mysterious new comers with their strange mystical magical ways.  There are various odd encounters and contretemps that for some reason bring to  mind Jack Vance’s Cugel the Clever in The Dying Earth:  Not for any particular cleverness of character, but for the quirky encounters in a faded land.
Well that gets us to book two, The Witch of Hebron.  She is a “silver-haired beauty”, with spiritual powers to interact with people’s dreams.  She brings to my mind Emmylou Harris.  Which is to say that she is hot.  So we know at least one activity she will be involved in:  Emmylou Harris - meet author's alter-ego.
Intermixed with all of this is a mountain lion, the young runaway son of the local doctor who has picked up some medical skills, a late day Billy the Kid, and a fairly pointless, amazingly obvious deliverance-like bad guy.  All of which is strung together somewhat like a Louis Lamour western with some attempts at magical realism glued into the margins:  but without the macho.  Now you may ask:  Isn’t macho the glue that holds Louis L’amour together?  And I would answer: Exactly!  So what we have is an amiable, politically correct, except for the ever-so-pleasing women,  loosely tied together romp through the Id of Messieurs Kunstler.
Mr. Kunstler generally does a good job with the language, so it was painless.  It was relatively unstressful.   Did it bring up any plausible issues as to where we would be headed after a crash:  maybe a few.  To be honest, if he used the same caustic wit, that he uses in his weekly postings, describing the Lovecraftian denizan of today's Upstate New York,  it would have  more bite.
Posted by russell1200 at 5:00 AM

Aloha! I’ve just stopped by to say thanks for this cool review. Take care!

Hey dude! I fully agree with your thoughts.