Brian Aldiss’ Greybeard is a post apocalyptic novel taking place in England around 2030.  It starts off in a small remnant village, and through flashbacks we learn how England came to its current state. 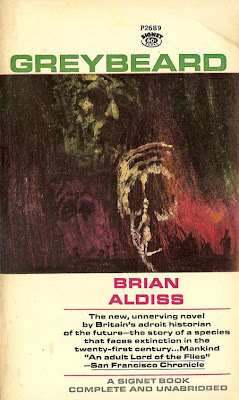 Brian Aldiss is relatively well known within science fiction ranks.  He has written many novels, but is also well known for his editorial work, and for his writings on science fiction.
Apparently the general drift of the story is very similar to the later P.D. James’ Children of Men.  Some have noted that it is suspiciously similar, and wonder if James had cribbed the idea from Aldiss.
The book is written in 1963, and thus what to us is somewhat near future setting, is pretty far away.  Although not particularly important to the story, the various miscues as to what technologies will be evident in the distant year of 1982 (little less 2011) are typically amusing.
In 1982 the British and Americans in a series of nuclear tests in space disturb the Van Allen belt and cascade the earth with an extensive burst of hard radiation.  This radiation kills many of the smallest children, aborts the unborn, sickens the older children, and sterilizes the adults.  From that point forward, there are no more children.  The protagonist of the story, Greybeard, was six at the time and is in 2029, at the time of the stories start, one of the youngest men on the planet.
We have a very slow collapse situation here.  There are a variety of wars imagined, with the heavy use of tactical nukes, and a variety of dictatorial leaders taking over countries to keep law and order intact.  The final collapse comes in a wave of cholera, and then the flue, only eleven years before the start of the story.
Without getting into a lot of details, the story is one of Greybeard, young (Fifty-year old) wife, with a few companions leaving their  medieval-like village and taking a boat tour down the mostly placid Thames.  Greybeard wants to see the coast.  There are a number of strange encounters along the way with highlighting the odd social turns that the aged reduced population has taken.  It has a very general feel of medieval or renaissance level living: but in a setting of almost tropical lushness as nature begins to return to areas it has long been banished from. A cross between an  elderly Huck Finn boating through a  depopulated world toward  The World Without Us.  It is a geriatric adventure story, with toothless gummy trappers, and aging widower friends for sidekicks.
I read the novel because, Aldiss in his book the Billion Year Spree coined the term Cosy Catastrophe.  By the strict definition, a cosy catastrophe, you have a relatively non-violent ending, largely featuring middle class characters, finding ways to pull together for the team and survive.  The Oxford Dictionary of Science Fiction describes it as:
Cosy catastrophe n. a disaster or post-apocalypse story which focuses on a character or characters who take advantage of the situation to pursue self-indulgent pleasures and attempt to rebuild society according to their (usually white and middle-class) values. [Giving examples:]
1973 B.W. Aldiss Billion Year Spree 293:  It was then that he embarked on the course that was to make him master of the cosy catastrophe.  The Day of the Triffids, by John Wyndham, was serialized in Colliers [magazine] , and appeared in hardcover in England in 1951.
1995 D. Broderick Reading by Starlight 26:  Our attention is directed to the soothing benefits of a reasserted background order.[….].
Aldiss, from his writing,  in the novel and in the Billion Year Spree, comes off as one of the malcontent progressives of the era.  So when he is knocking Wyndham, I am sure he is knocking the relative conservative British establishment of the day.
Of course in 2011, the progressive complaints made in  Greybeard are almost more a part of the status quo, than the conservative social moors of Wyndham.  Greybeard has early 1960s white progressives, running around, and in the end acting as highly moralistic 1960s progressives looking to shape a society toward their fashion.  Sure seems a bit cosy to me.

How about with a broader definition?  A cozy (with the z) with the chart I used on the earlier post I would probably rate it a Y-N*-N*.   Yes to survivable; dying of old age is survivable enough for me.  No* to preparation; they do prepare but not for survival per se.  They have some cool equipment, but they are using it to record the collapse.   No* to reconstituting society.  Well, a normal human society does not appear to be coming about, but a very different one is.  From a radical's perspective, this is a good thing.  They are getting the society they want, but they are not rebuilding it themselves.   I would put it as a N* in the new broader definition cozy: close but not quite there.

Is the book any good?  It is often given good reviews.  But it is the type of novel that "thoughtful" reviewers are going to like simply because of its back-history. His quality of writing is high.  There is certainly an interesting mish-mash of characters.  Most of the flash back scenes are overly long.  There are some very well done scenes, particularly later in the book when the Algy is meeting his wife, and at the death of his father.   The book, to me did seem to drag on.  The final conclusion was very improbable, but within the allowed bounds of science fiction, if not "real-world" story telling.  The author in interspersed sections brings up a lot of interesting issues with his depopulation world.   For all its failings, it has more useful thoughts behind it than many of your more action packed adventures.  So I would say it is worthwhile.  Possibly, if I had not been annoyed with his snarky uncharitable comments toward Wyndham,   I might be feeling more charitable toward his novel.
Posted by russell1200 at 5:00 AM