The Unit: A review.

The Unit:  A novel  is a story set in the inland mountainous areas of Northern California, as a family attempts to hike out to a safe location. 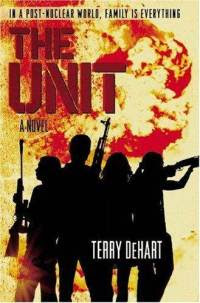 The author,Terry DeHart , is a former U.S. Marine (VMO-2 Ordnance - 1979-1983) and NASA security analyst/technical writeer.  His short stories have appeared in numerous magazines and three off them have been nominated for the Pushcart Prize.  An interesting short story of his, Living Off the Land can be found here.  He lives in San Francisco Bay area.
The book starts off fairly quickly with one of those magical EMP strikes that we wipes out far more than best evidence indicates would be likely.  We have discussed this before.   More realistically than One Second After, we also modest usage of some more powerful weapons:  nukes to be exact.  At one point there is a fly over of one of these areas, and the narration of the disaster below is compelling.  One of the people he notes in his acknowledgements is Dr. Alan Robock whose work on nuclear winter and regional nuclear wars we discussed  before.  There is some foreshadowing of a coming nuclear winter.
The author broadens the story by frequent shifts in first person narration.  Since the focal point of the story is  a small family - father, mother, teenage girl, teenage boy – traveling to safety, one chapter will have the father ‘s point of view, the next will be the mothers, etc.  Less frequently we get the point of views of the people they run across and interact with:  the bad guys.
As seems to be not too atypical for apocalypse-in-progress stories,  our little family is rather dysfunctional with its separate components not having a whole lot of love for each other.   Under different circumstances, a breakup would be imminent.   Family cohesion improves somewhat as the trials start, but only up to a point.  A problematic point of the story is that none of the characters are particularly compelling or likable.  Based on the very little bit of the author’s work I have read, it does make you wonder if this is his intended writing style, or if this is own personality coming through the characters.  There is an odd analytic, cold dysfunctionality to all the family members.   The one character who actually seems somewhat sympathetic (a gay hairdresser type- LOL) is barely given his due- the author does not seem to even realize that his hairdresser has displayed more combat efficacy than most of the intended militant combatants.
The occasional sections that shift to the point of view of the bad-guys are interesting.  The book chooses to be race-neutral in its villain; They are never described completely . It does sound a bit like a shadowy version of United Colors of Benetton. It is odd that an author who is willing to deal with the inner tribal rivalries involving gang rape would shy away from this issue:  odd where the comfort zones lie.

The bad guys have their own deadly concerns.  Although they have the weapons and the violence, they must also deal with threats of violence from within the group.  Although young and inexperienced,  they are quicker to accept the new reality and use what resources they at hand.  Their tactics are clever, and they are more than capable of outwitting the good guys.
You do actually run into a survivalist, who the author treats reasonably well.  As must be the case he is a loner with no family attachments, and (rather realistically) he is getting up in years.    He doesn’t stick around too long, but he has a cool setup, and is fun while he is there.
It is a bloody book,  groups go rogue very quickly, you have crashed buses with the dead handicapped kid still inside in their wheel chair, you have fairly graphic gang rape of one of the protagonists, you have (at times slightly cinematic) gunfire.  The author knows his weapons: an M-16 from a M-4.  While there is the usual tendencies for hero’s to be injured, and the red shirts and bad-guys to die instantly, the general effects are accurate.
There is a bit of overt sermonizing and religiosity, but you also have the power grabbing creepy preacher types making an appearance as well.  There is an obvious suspicion of the government, but the government that remains is the only group in a position to help anyone.
Although, the book has a planned sequel due out in 2011, the book does not end at a cliff-hanging mid-point.  You could stop reading at this point and be satisfied that you have been served a complete story.
Will I read the sequel?  Likely.  As I noted the cold dysfunctionality of the “heroes” that gave me a sense of detachment from this story.  But there is enough there to want to see where the author takes the story.
Posted by russell1200 at 5:00 AM