Philip Revene Three Mokes East East tells the story of a young man  travelling in the post collapse United States in the 2030s.  A moke is an informal term for a donkey, and thus the three donkeys on the cover. 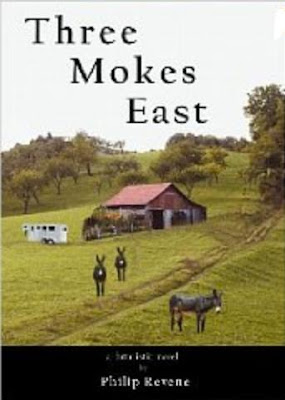 The collapse started in 2012 and continued in various forms for twenty years. The collapse itself is sketchily laid out. The primary culprit, at least in the Americas is a Hantavirus, a flu-like virus that is carried by rodents. But this one has learned to live in humans, and jump from human to human.
At the time, news of the Andes Virus was simply another in a long string of threats plaguing the country. Reports of hurricanes, tornadoes, earthquakes, droughts, terrorists, shortages, floods, inflation, wildfires, unemployment, bankruptcies, foreclosures, bank failures, scandals, and swine flu outbreaks had become so commonplace that the public accepted ominous news as the normal course of things; something to be concerned about only until the next catastrophe replaced it in the headlines - something to be taken in stride as the coast of doing business, the cost of doing life.
We learn of odds and end details of the collapse through flashbacks, discoveries in travels, and some character dialog.  It is the haphazard discovery of people going about their life. Society within the remnants of the United States is an odd mixture of Neo-Victorian social mores, libertarian economics, leftover remnants, government monitored e-mail, and various collections of left over criminal elements still found in scattered sections of the country﻿
Arby Sterling has just finished his required civil service commitment in the Federal Army.  He is shell shocked from the chaos, violence and degradation that he has seen.  To some degree he is mirroring society, which has pulled back from the loose pre-crash social mores and gone toward Victorian conformity – at least on the surface.  Anyone who has looked closely at Victorian society knows that there is a lot of complexity under the surface- which is what we have here.
Arby sets off to meet his sister Ivy, who is finishing her civil service commitment working for the Department of Interior (equivalent) in drought stricken under populated Arizona.  He is to collect her and a breeding donkey, and return to Virginia.
This requires an extended train ride, and vehicular travel.  The novel is a series of, sometime interconnected vignettes, as we get some back story on Arby’s history, the history of the collapse, and get to see the varied sites of this newly destitute and still dangerous land.
The book at times comes close to veering into the survivalist faux-western genre that some authors seem to think is appropriate (Nova and Kunstler).  To the extent that it avoid this trap, it makes for a more convincing read.  Much like Kunstler’s Witch of Hebron the episodic vignettes due give a sense of the surreal.
Since we started our cozy theme,  we can note that it is rated as a cozy.  Were it comes closest to failing the test is on point one: universality.  Given that the recovery is well on the way, it is arguable that there adventures are of an individual nature, not of the collapse itself.   However, as the book notes, it was a very chaotic collapse, highly variable from area to area.  The experiences of our travelers is not as endangered because so much of the worst has gone by, but the majority of their dangers are very much a part of the collapse:  they are not the usual dangers of people on the road today.
The book does move slowly at times.  The libertarian, anti-Federal ravings are completely out of place.  The author does not seem to grasp that a society where the rule of law is very tenuous  may not be the best venue for a “libertarian” economic structure; libertarianism without the rule-of-law might look a lot like brigandage.  The author, I suspect that is pining for an earlier era of American capitalism.  I wonder if he is aware that Jay Gould, the high financier on Wall Street, was twice involved in gang-like armed physical confrontations over business (a plant in NJ, and a railroad in upstate NY) whose control he was fighting over.   I suspect this is not the type of libertarianism that he is thinking of.
The slow pacing comes very close to killing the story.  The little episodes do not always add up to much.  But the character and the friends he meets along the way are generally a likable group of people to spend time with.  The book is set to far into the recovery period to really be an apocalypse-in-progress story, but the many flash backs to give some of that atmosphere to the proceedings.  In the end, it comes as a nice story where the good guys win.
Posted by russell1200 at 5:00 AM