Crossing the Blue: A Review

Holly Jean Buck, a bit of a world traveler, wrote Crossing the Blue as an imagined post-apocalyptic future created through global warming and peak oil. I believe I was tipped off to it by Nova: who seems to have erased the review when he erased his earlier published materials. 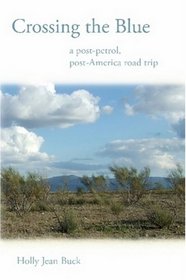 Her biographical information, which is directly from here:

She has traveled through forty-eight of the United States and has lived overseas for a great part of her twenty-nine years. Following postgraduate studies at Naropa University's Jack Kerouac School of Disembodied Poetics, she spent time in many countries around the world, including Wales, England, Ireland, Greece, Kosovo, Columbia, and Japan. She has been a correspondent on international affairs related to the environment and green living—as an intern for Toronto's Walrus magazine—and also has experience in mapmaking, permaculture, managing invasive forest species, and cataloguing antiquities.

The novel starts in partially submerged Florida ruled over by a dictatorial strong man. People spend their time working on the ex-golf course turned small plot farms, while he has plans for regional conquest.

A young boy-man, and woman escape into the greater United States, and begin their travels toward her home area of the Pacific Northwest. The novel is a bildungsroman [new word for me!]. With the gradual growth of the naive inexperienced young man being a continual slow and plausible process. The female protagonist I take as a self-idealized version of Ms. Buck. Since Ms. Buck's  novelized-selves are not nearly as annoying as some folks, it works out well.
As is fairly common with these traveling  tails, a variety of episodic vignettes occur, some threatening, some not. It does give the book a little bit of a surreal feel, particularly at the earlier stages of the trip. But the locations changes seem to come a little slower later in the book, and settle into a a rhythm that gets a little scary at times.

What there is in the way of moralizing, does have a little big of a lefty-in a sort of hippie (see Naropa University's Jack Kerouac School above) sort of way, but I did not find it to be nearly as overbearing as many books in the genre. I suspect the fact that the authoress has been to many very different places around the globe gives her some alternative experiences to draw on that go a little bit beyond the doctrinaire rantings of our political pundants.

When asked why she did not write a magazine article instead of a novel:

Because, really, who wants to read a bunch of nonfiction or statistics about the state of things? We all know the world’s pretty screwed up. At this point, our problem isn’t lack of knowledge... it’s lack of imagination. I wanted to stir the imagination... and write something that’s fun to read. This work was prompted by the situation of the moment... but the story of Blake and Juliet’s love, that’s eternal. Blake’s coming-of-age, coming into himself, learning to be a magician, so-to-speak-- that’s a timeless story-- and the musings about civilization, those transcend the moment too. This book isn’t just concerned with the future-- it’s also about the past, about how we got to this state.
For a first effort she did very well.  Given her propensity for moving on to new areas of interest so frequently, I suspect it may be the last one we see from her.﻿﻿