This World We Live In: A Review

This World We Live In is the last book in the Last Survivors series by Susan Beth Pfeffer.  It started with Life As We Knew It, and re-started with The Dead and the Gone.  This book takes the geographically separated starts (rural Pennsylvania, and  Manhattan) and brings the characters together in rural Pennsylvania one year into the disaster.  Volcanoes set off by tidal forces have cast a continuous gray pall over the land, and the world is slowly dying. 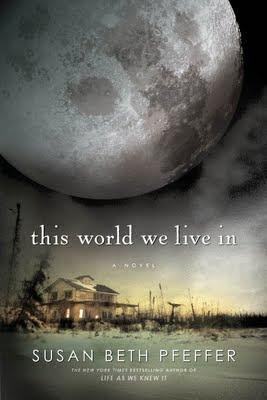 The obvious couple of Alex and Miranda meet.  While there is a bit of an attraction, it is sort of like the attraction of two head strong youths, who have had to take on adult responsibility quicker than expected, and with more life serious consequences.
The book is much less even in quality than the other two.  Too many developed characters with too little literary (and literal) space are brought together.  New characters are brought in.  Characters are winnowed out in rather abrupt arbitrary fashion.
On the plus side, this book continues the more mission driven theme of the second book.  Although there are attendant general survival issues, there are objectives that are trying to be accomplished.  Ferocious and bitter arguments over what these objectives.  While technically it meets some of the criteria, nobody would think this novel was a cosy.  In fact, when I (after writing most of this review) when and did my cosy (cozy) list, I made the first two novels a cozy, but not this one.  Ultimate survival is required for a cozy, and it is not clear at all that survival is going to occur.
The ending is very rushed.  Again there are too many developed characters to give proper attention to, and the very rapid ending exacerbates the problem with the final conclusion only takes up a very few pages.    To my mind, the penultimate scene is not the finale, but the scene prior to it.  Alex is trying to find a safe place for his younger sister Julia, and this brings about some very stark revelatory scenes.  If there had been a way to end, with a version of this scene, I think it would have been a stronger ending.
Posted by russell1200 at 5:00 AM