You may have hear of this one, Patriots: Surviving the Coming Collapse by James Wesley Rawles. LOL 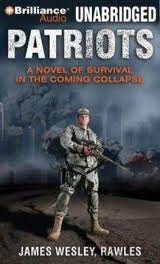 Apparently the initial genesis of this book was a novel written in the 1990s, The Gray Nineties, and released on the internet as Triple Ought.   Without going into its long convoluted history, it was updated and re-released in 2009.
It is a book that people tend to love or hate.  I think I am unusual in that I am somewhere in the middle hovering around bemused enjoyment.
We are talking about an extremely popular book here.  So why do some people hate it:
1.   Wooden characters - character development typically involves giving you a briefing at their first appearance: characters background, skill set, weapon of choice, etc.  After that you are pretty much on your own.
2.   The Paranoia scenarios from the 1990s are a little dated.  After all, NATO cannot even keep an air operation going against Libya. UNICEF is probably more dangerous than UN Peacekeepers.
3.   Slow, or at least very uneven, pacing
None of these points is unfounded. And yet, it still sold a ton of copies.
So why is it popular?
The novels characters are very much a Protestant, Caucasian, mid-west/western crowd.  There are some Jews and Blacks to be found, so it is purposefully trying to avoid the racist label.  But United Colors of Benetton it is not. For better or worse, it offers the homogeneity of culture and ethics that is missing from mainstream America today.
For those that like this type of thing, it gives almost cook book like instructions on various items such as fortifying your home, childbirth, anti-tank grenades, etc.   Kunstler did it as well, but why authors feel the need to go through step-by-step surgical procedures in their novels is somewhat beyond me.
Not surprising given its genesis, it is a holdover from the 1970s nuclear war survivalists scenarios, blended with Mel Tappan and the 1990s militia fears, with a final updated to the current economic mess.  You have bug out backs, remote compounds, and dangerous foreign enemies.   The main characters are young, relatively wealthy, college graduates who have socked away all their earnings since graduation into their preparations.  The demographics of your typical visitor to a prepper website are someone 50+, with some college education.  This is the crowd that got out of high school in the late 1970s, and while not impoverished, have had a hard time keeping up with the economic success pattern of the post-war generation.  They feel left behind.  The Patriots in the book, are young enough and successful enough, and events play into their hands in such a way that they are in a position to act.  Acting in a highly moral (-istic?) fashion, they are able to survive when corrupt society falls, and rescue the United States:  from North Dakota!
What’s not to like about that?
For myself, I have a aesthetic preference for economic collapse stories over some of the other collapse (flue, nuclear, death of grass, triffids, etc.) that you see out there.    Although some have noted that there is not much survivalist type fighting until the Red Dawn portion of the book kicks in, the various bug out tales are interesting.  The road block fights are entertaining.  Of course why these books have people sitting around roadblocks on highways in the middle of nowhere when everyone (except for the exceptionally well armed, well organized survival types) has run out of fuel is unclear.  They make for some entertaining reading.

In the end, Patriots, unlike some of its close cousins, just seems to stick in your head.  For all its clumsy style, it is delivered with an intensity and fervor that lets you know that the author is sincere.  The book is as much a polemic as a novel:  an attempt at delivery more in line with Thomas Paine, than Dylan Thomas.  Sincerity goes a long way toward forgiving stylistic imperfections.
Posted by russell1200 at 5:00 AM