The Dead and Gone: A review

The Dead and Gone is the second book in the series of YA dystopian novels by Susan Pfeffer that started with Life as We Knew It that we just reviewed. 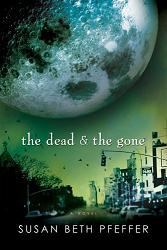 This book in its own way is as compelling as the previous.  One suspects that the author listened to some reader feedback and made some changes to the general scenario.  It appears that she wrote the first novel more as a study of characters under stress, rather then as a "how to" proposition. In a frank interview she made note of this:
Reading with Tequila (RWT): You've written a series of post-apocalyptic novels. Are you someone who is awed by the possibility of an apocalypse, or someone who fears one?
Susan: I've never given any serious thought to an apocalypse. I don't even know how to spell it.
I did grow up in the era where we were taught how to cover our eyes and sit under a desk and wait out an atomic bomb, so I've always had an awareness the world could vanish in the blink of an eye (although with my eyes closed, I guess it would be the blink of someone else's eyes). And I do remember (all too vividly) my big brother's explanation of atomic mutations and all the scary creatures that would evolve...
RWT: How would you prepare if you knew the apocalypse was imminent?
Susan: I am totally unprepared. I don't even have a working flashlight (as I discovered, to my regret, when there was a five hour blackout the other evening).
I have plenty of body fat, so I won't starve to death for a while (and I'll be delighted to finally lose the weight). Beyond that, a massive amount of 100 calorie snacks, and a genuine ability to entertain myself, I'm a goner...
When I came up with the idea for Life As We Knew It, I thought of it as a combination of a family problem novel and a disaster story. I've written lots of family problem novels, and to me LAWKI was a natural continuation of those books, with the problem being worldwide, rather than simply limited to one family or even one neighborhood.

There are things I can write and things I can't. I'm not an adventure story writer. I'm, at best, limited in my ability to write action scenes.

But what I can do is explore family dynamics. Miranda doesn't do anything bold and daring and brave. But she fights with her mother and celebrates holidays and goes skating on the pond.

The same is true of Alex in The Dead & the Gone, the companion volume to Life As We Knew It. And it remains true in This World We Live In, the third and final book, where Miranda and Alex's paths cross.

Things happen in all three books. But the feelings and the conflicts aren't that different from what any person could feel. It's just the circumstances that are out of the ordinary.
This book is set in Manhattan. In the previous book you here about the tidal waves that come crashing into shore when the moon shifts its orbit.  In this book you live it.  The book centers around the Morales family, the father is in Puerto Rico, the adult brother is away in the military, and the mother is (presumably) on her way home on the subway when the shift occurs.
The three childern are on their own.  Seventeen year old Alex, forteen year old Bri, and twelve year old Julia have to shift for themselves.  In the patriarchal Puerto Rican culture, Alex is given the largest responsibilty for their well being, but all the children are forced to do their part.
One change from the previous book is that there is a little more realism with regards to provisions.  Their Uncle Jimmy gets there help in pulling stock out of his small corner grocery store before the feared looters arrive.  In return for this help the children are given a share of the provisions.  Again this is not a prepared family, but the logic for their accumulating food is a lttle more reasonable.
Another difference in this book is the role of religion.  Absent in the first book, except for a slimy pastor who uses his flock to feed himself, in this book the children are all attending parochial schools, and the Catholic Church offers them aid and encoragement as best it can given the circumstances.
There are bodies on the street, there is  a certain degree of looting.  There is a bit of a caste system that develops where influential people are given preference for rescue.  The city is maintained by the government, but primarly so that its stockpile of wealth and valuables can be taken to undisclosed safe havens.
The children make a lot of wrong decisions, and display a lot of bravery.  People don't care, and then people give them completely unexpected help.  The book ends on a more ambivalent note than the previous, likely the author new that a third book was in the offering.
Posted by russell1200 at 5:00 AM