Life As We Knew It: A Review

In Life As We Knew It, Susan Beth Pfeffer has written one of the more realistic apocalypse in progress novels out there. I am not an expert on publishing matters, but it seems to have caught the first wave of recent young adult (YA) dystopian novels. The authoress has written many many YA novels, but these novels seem to have catapulted into Name status. She even has a page at her blog for reading groups that want to discuss her series of three dystopian novels 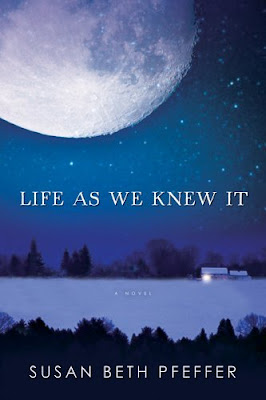 The novel is realistic in so far as what happens to a typical American family during a time of crises. Which is mostly nothing. An interesting nothing, but none the less, nothing; It is more scary than adventurous.


Set in rural Pennsylvania, it starts up with a family of four with mom heading up the family. Dad is elsewhwere, remarried to a younger woman, and he is calling to let his children know that his new wife is going to be having a baby. The teller of the story, sixteen year old Miranda Evans, is interested in competitive figure skating. We are getting her story through the journal she keeps. Younger borther Johnny is into baseball, and older brother, Matt, is going off to school.


Then a big asteroid collides with the moon, and knocks it of course, and the SHTF. Tidal surges wipe out large parts of the both coasts of the United States, and eventually volcanoes start firing off. It is a mess.. None of this is a spoiler because it is talked about on the cover of the book.

The generel drift of the story is that the family grabs what food they can, rations like crazy, chops wood like crazy, huddles toghether in one room in the cold, and pretty much get on each others nerves. Various people come and go. You here a lot of references to groups wandering about on the roads trying to find a better place, and profiteering by some groups. The one religious group noted in the book does not come off too well. As we will see she tacks in the other direction in her second book.

I think the author is a little optomist about how long people will be able to hold out when the grocery stores close, but there is some attempts at government assistance. On the flip side, when a strain of flu hits, the weakened population is decimated.

Although the disaster sequence has to be one the least likely out there, it gets the job done without having to argue too much about the politics, or playing some sort of ecological blame game. Looking at the slow starvation faced by the family might do a lot to get people to at least store some emergency rations for normal disaster situations.

I am writing this review after the review for Patriots. In some ways you could not have much different books. Prepared Christian survivalists verus secular unprepared Americans. But like Patriots, this book really stays with you. If Patriots works as a strident polemic, this book works as the earnest pleadings of a teenage girl who sees her life vanishing, and as she slowly starves, is not sure if there is another life that will replace it.
Posted by russell1200 at 5:00 AM

This post is ruining my theory that book reviews are web traffic speed bumps.

Of course it helps if you get (even a tiny) mention from a site with some serious traffic.