No Blade of Grass: A Review

No Blade of Grass is a classic, now out of print, with a 1956 copyright.  It was originally released in Great Britain as The Death of Grass.   There was a movie, that does not sound like it followed the novel's plot very closely. 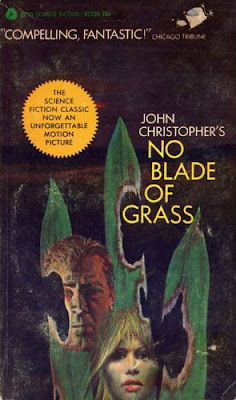 He was born Christopher Samuel Youd: aka Sam Youd, in Lancashire England. This book is under his most common pseudonym, John Christopher.  Many science fiction writers from that time period used aliases.  This practice was presumable to keep them from being seen as "unserious" writers, and thus bar them from the potential of main stream success.
He also wrote other EOTWAWKI type books such as  The World in Winter (Early Ice Age), and A Wrinkle in the Skin (Earth Quakes), Empty World (YA Plague).  His list of titles at Amazon is long.  To some he appears to have been an early talent, that never turned into one of the Silver Age of Science Fiction (1960s to early 1970s) greats.
One reason I was interested in reading this book is that I have seen it sited as the possible inspiration for the collapse in Cormac McCarthy's The Road.  If you replace the death of grass with he death of chlorophyll and then go 9 years into the future, the settings are rather similar..
What I find amazing is that even with the slightly odd assumptions and thought process of over half a century ago, it is in its own way a much grimmer book then many modern novels of its type.  It is also interesting that as a result of the wartime deprivations, most of the inhabitants of the British Islands presumed to more prepared for the contingencies the food rationing that begins the books emergency periods, and a far larger portion of the male populace has some sort of military training and combat experience (WW20 than would be the case today.
The efforts that the government is willing to go to reduce the number of mouths to feed, is far more extreme and far more blunt than most would try today.  Today, we are more willing to believe our governments are incompetent rather than cruel. In our earlier discussion of "cosy" fiction, we noted that the acusation that the fiction was pro-authoritarian was not well founded.  It certainly is not in this book.
The agent of destruction is an ecological holocaust in China that wipes out its rice fields.  Efforts at eradication the guilty virus bring out a latent talent for destroying the entirety of  Family Poaceae (referred to by its old name Gramineae in the book): a.k.a. the grass family. Grass includes rice, wheat, rye, oats, and barley.  As is commented at one point, there are about 54 million people in England at that time, and even with a rush to plant root and non-grass vegetables, maybe 1/3 of them can survive.  Which 1/3 is a tricky question.
The government puts a cheery face on efforts by world scientists to eradicate the virus, but when these efforts fail, the SHTF as the news begins to leak.  The main characters start as two small families slowly picking up extras as they journey out of London and toward a hoped for country refuge.
In their efforts to escape the group goes rouge almost immediately, and very shortly after get rough treatment from other groups who catch on quickly.  It is one of the few novels of this type where major characters are raped.  The mix of people they confront is far more mixed and realistic than many contemporary novels.  Everything from small families, to ambushing armed villagers, to rogue military elements.  The roads become too dangerous for the group very quickly.  Who winds up adapting, and who does not are not predictable:  except that since it is the 1950s the wife has to be wimpy and complain a lot.
The purpose of all this is to show how quickly the veneer of civilization is ripped off and how quickly it becomes a neighbor against neighbor, brother against brother battle for survival.  The issues of who to help, and who not to help are not papered over.

In my discussion of cozy (American spelling) fiction, I noted some criteria.

This would rate it as a sort of survivalist fiction, bordering close to my expanded concept of a cozy.  By the earlier vary narrow definition, it would hardly classify as the middle-class lark while the working class die off.  If the middle-class have an advantage, it is in the form of money, not some esoteric ability at social adaptation.