The Things That Keep Us Here: A Review

The Things That Keep Us Here  (TTTKUH) is a pandemic flue suspense-disaster novel... 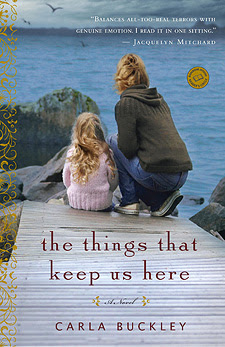 that has received some nice reviews (from the book's website):


"A knockout debut of the decade." —LA Times

"The Things That Keep Us Here is without a doubt one of the most powerful and realistically frightening books I have ever read... "   —Suspense Magazine

There is a video (also from its website) about the research the authoress did in writing the book: the author shows up about 45 seconds in.  It is a bit of an infomercial for Ohio State University, but none-the-less interesting.
The story reminds me a lot of Susan Beth Pfeffer's Life As We Knew It.  You have a family with a couple of kids, the father and mother are dealing with break-up issues, and everyone is stuck in the house as the suburban infrastructure slowly falls apart around them.  There is a fair amount of bickering, and unlike many of these apocalyptic tales, character development is at the forefront.  The primary tonal differences from Pfeffer is that the disaster scenario is more plausible. the build up of tension is better executed, and although the children are not ignored, the focus of the story is the adult.
Another story that it echos at times is The Jakarta Pandemic that we reviewed earlier.
Some noteworthy differences in approach:

Pretending that my opinion has merit, how/what would I "rate/recommend"?
I would very much recommend the book.  Somewhat on artistic merit (there are a lot of well written books out there), but more so because of its illustration of what sorts of hard choices would be facing people in very stressful, life and death situations.  Will you help your best friend?  Will you help your best friend if they are sick with a contagious disease that may infect your children?  If you are exposed to a very infectious disease, but show no symptoms yet, what will you do for your own survival?  Who will you put at risk?  Because the character development is so well done, the book puts these questions in anguishing and real terms.  It will teach you a little bit about a reality that hopefully you will never have to face.
Posted by russell1200 at 5:00 AM