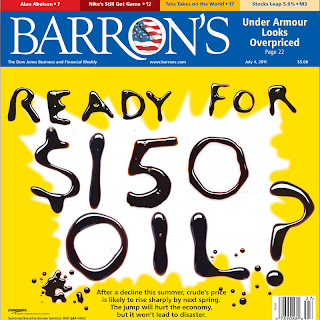 Barron’s has a story:  Get Ready for $150 Dollar Oil (hat tip Big Picture)
Given that many of the readers here are in the peak-oil camp they are probably saying to themselves:
“That’s going to be a bargain!”
But for major media outlets to discuss the matter, and to have it as a screaming yellow front cover lead means that the “normal” people are starting to catch up with the peak-oil crowd.  The even have a chart (not shown here) titled "Peak Price, But not Peak Use."
Get Ready for $150 Oil (limited access possibly more complete here)
Gene Epstein, Barron’s, 2 July 2011
The U.S. economy is never completely ready for higher oil prices, which is one reason they take a nasty economic toll when they arrive. But readiness can be enhanced by awareness of the likely outlook for petroleum prices–and the outlook today is relatively grim, although probably not disastrous.
Despite the recent 20% decline from April highs, new highs on crude, heating oil, diesel fuel, jet fuel and gasoline seem likely over the next 12 months. Following some further easing over the summer, the second leg of the long-term bull market in petroleum–the first occurred in 2007-08–probably will begin this fall.
As oil producers’ spare capacity gradually declines to worrisome levels, the average monthly price could reach a record $150 per barrel by next spring, with spikes to $165 or $170. With this, $4.50-a-gallon gasoline will become the norm. That will put a huge dent in consumer wallets, while ramping up the desirability of fuel-efficient cars.
The article spends a lot of time talking about why this would not be all that bad, how our economy is not as vulnerable to shocks as it once was because we are a more service based economy.  This may be true in so far as our reliance on ponzi-scheme finance does not require that you produce anything to generate money.
Posted by russell1200 at 5:00 AM