Running Out of Food (again) part 2

There was an earlier post here on this subject.  It is an involved enough subject that there is not as much overlap between the earlier post, and this one.

The Economist has a special section in their print edition on The Future of Food.  They actually do make the distinction between sustainable practises, and efficient practises that are likely to feed the most people.  They willingly acknowledge that there report is geared toward the latter problem.  To listen to a short (slightly over eleven minutes with those cool English accents) discussion by the author of the report click here.
One item mentioned is that you simply cannot apply more inputs to produce your way out of the problem.  As an example, Nestle's Peter Brabeck has noted that there is roughly 4,200 cubic kilometers of water that could be used each year without depleting overall supplies.  Consumption is currently at 4,500 cubic kilometers.  Agriculture already uses about 70% of that total.  Because of this over-consumption water tables are dropping rapidly.  The article notes that the water table in Punjab used to bea few meters below the surface, and is now in some places hundreds of meters below the surface.  There are a number of great rivers that no longer reach the sea:  the Colorado, Murray-Darling, and Indus.  It is estimated that using current methods farmers will need 45% more water by 2030; just 18 years away.  As more and more people live in the cities, the political battles over water are likely to tilt to the cities.  The farmers used to get 90% of the water, now get 70% and need another 45% more.  They will be lucky if they can keep hold of their 70% share.
Another issue discussed is the continuing results of the green revenue, and the pace needed to keep up with the increasing population.

The Green Revolution threw resources at plant-breeding, which worked brilliantly. The new seeds enabled grains to absorb more fertiliser and water. But now there is not a lot more water to spare, and fertiliser usage in some places has already passed saturation point .... The next 40 years will also have to deal with the potentially profound damage to farming from climate change, which in some parts of the world could reduce yields by one-third.

And disturbingly, for the first time since the Green Revolution, crop yields are growing more slowly than population.  To be more exact: growth in population and demand for food have both slowed down, but crop yields have slowed more. Between 1961 and 1990 wheat yields were rising at nearly 3% a year. During that period the world’s population was growing by an average of 1.8% a year. Between 1990 and 2007 population growth slowed down to 1.4%, but the rise in annual wheat yields slackened to 0.5%. The growth in rice yields between the two periods halved. Yields of mankind’s two most important crops are now almost flat.

Some argue that these figures are not as worrying as they seem. After all, population growth is slowing and yields of some crops, notably maize, are still rising at a steady pace. And the growth in yields may have slowed not because agricultural technology has hit a wall but because farmers are cutting inputs for environmental reasons, or because they are focusing on quality more than quantity. Indeed, in America farm output is rising but the use of fertilisers and other inputs has been cut back. Breeders have lately been working on wheat for extra protein, not just yield...

Keith Fuglie of the United States Department of Agriculture reckons that total factor productivity in world agriculture—a measure which includes capital, labour and other inputs—is still rising at a healthy 1.4% a year. This reflects a more efficient use of resources. And if farmers are choosing to reduce yields now, they could also push them back up again later.

Other researchers, however, think global productivity is indeed slowing down, especially outside China. According to a study using different definitions from Mr Fuglie’s, growth in land productivity fell by over one-third between 1961-90 and 1990-2005, and growth in labour productivity fell by two-thirds. And as Mr Fuglie says, even if productivity is rising, it needs to rise more, from an annual gain of 1.4% to 1.75%, he thinks—a big leap. And though farmers might choose to increase yields later, their choice would depend partly on food prices rising more than prices of inputs such as fertilisers, which they may not (in 2007-08 fertiliser prices rose much more than food prices). So even if productivity is increasing—and that is not clear—on its own it is not enough.  From the Economist, How Much is Enough: the answer is less straight forward than it seems, February 24, 2011 print edition.

As the following table shows, agricultural productivity is rising within the United States, but is past its peak rate. The rate of productivity growth no longer is keeping up with the population growth.  from Julian M. Alston, Jason M. Beddow, and Philip G. Pardey,  Agricultural Research, Productivity, and Food Commodity Prices, 2009. 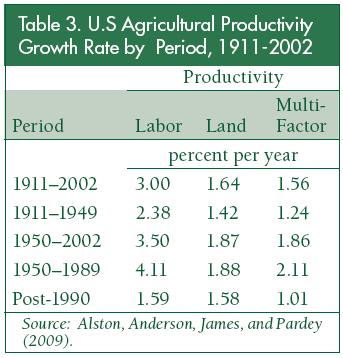 This same grouping of authors give their own summary on the situation.  From  Julian M. Alston and Philip G. Pardey, Agricultual Productivity and Global Food Security in the Long Run, Choices: The Magazine of Good, Farm and Resource Issues, Fall 2009.

Such a review of the recent past is a useful first step towards answering questions about the likely future path of agricultural productivity and what may be implied for the availability and price of food over the coming decades. The papers reveal several interesting points. First, institutional changes in China, the FSU and Eastern Europe during the 1990s have had substantial impacts on global productivity patterns. China has had continuing high rates of productivity growth, pulling the global average up, while the countries of the FSU and Eastern Europe have had a dismal record of productivity, especially during the initial years of transition, pulling the global average down. The effects of these essentially one-shot, institutional changes might have realized much of their supply stimulating effects, so it is not straightforward to extrapolate from the recent past to the future. Second, among developed countries generally, agricultural productivity growth appears to have slowed significantly during the most recent 10-20 years, possibly reflecting an earlier slowdown in growth of spending on certain types of productivity enhancing agricultural R&D.
If they are sustained for more than a few years, these diverging patterns of productivity growth can be expected to have very significant implications for international competitiveness and comparative advantage in agriculture among nations, and among regions of the world. The long-term outcomes will turn on the influences of determinants of productivity patterns that cannot be controlled in the near term, such as climate change, and other determinants that can, such as private and public investments in agricultural science and technology.

I interpret diverging patterns of productivity [having] significant implications as meaning:   uh oh!

I wish the online version of the economist was pieced toghether better.  It is a shame, because while they are trying to show some areas where they may be positive developments, they don't sugar coat the problems.  If you get a chance to look at a print copy, I would make the effort.