I wish I had found this earlier. Most of the medical links on influenza are available only as abstracts with the body behind a wall.

A History of Influenza [pdf], C.W. Potter, Journal of Applied Microbiology 2001.
or extra link.
What the author counts as pandemics (Records too sparse for pre-16th century):
His section on the 1918-1920 Influenza:

Pandemic of 1918-20: The influenza pandemic of 1918-20 is one of the most dramatic events of medical history: statements include: “the greatest medical holocaust in history”; “the pandemic ranks with the plague of Justinian and the Black Death as one of the three most destructive human epidemics” and “deaths in the hospital exceeded 25% per night during the peak”….
The origin of the pandemic is not known. Reviewers have commentated on a possible origin in China; however, the first outbreaks occurred at approximately the same time in North America at Detroit, South Carolina and San Quentin Prison in March 1918, and reviewers accept that this evidence supports a theory for the origin of the pandemic in the USA.  From here the pandemic can be traced in place and time, and this is shown in Fig. 3.
From the above focal points, infection spread outwards and then eastwards as young Americans were drawn to the army and naval training establishments of the American Expeditionary Force (AEF), and to the war in Europe. Although large numbers of cases were recorded, the infection appeared to be no more virulent than had been seen in the past. All authors agree that infection was transmitted by ship by the AEF personnel to military depots at Bordeaux, France in April 1918. From here, infection spread to the British Expeditionary Force (BEF) and other forces involved in the war in April/May 1918, and in the same months reached Italy and Spain. This period also saw outbreaks in Germany, and the pandemic was clearly influencing the course of the war. In June, the disease arrived in Britain, and from there was transmitted by the BEF to Murmansk and Russia, where it spread with great rapidity (Fig. 3). Infection reached North Africa in May 1918 and circled Africa to affect Bombay and Calcutta and then China, New Zealand and the Philippines in June 1918. In each country infection spread quickly for a few weeks, and then sharply declined. The events of March-July 1918 outlined above were not viewed as exceptional; pandemics of influenza had occurred before, and the number of deaths recorded was comparable with past experience: in contrast, the events which were to follow remain unique to the history of influenza.
First, in August 1918, influenza broke out on a boat travelling from England to Freetown, Sierra Leone; on landing, the affected crew was taken to a local hospital and as a result influenza broke out amongst dock workers and later in other parts of the town. Within a few cycles of infection, it was apparent that the disease had become more virulent, with a 10-fold increase in the death rate amongst cases. Secondly, the influenza epidemic in Europe saw the emergence from Brest, one of the main ports of France serving the needs of the war, of a markedly more virulent form of influenza which rapidly spread to all of Europe. Finally, a ship arriving at Boston, USA from Europe unleashed on that city, and subsequently the whole country, the more lethal form of influenza (Fig. 3); however, with hindsight, it has been suggested that this may have arisen from earlier seeding infection The pandemic reached Australia in January 1919; it spread through Africa from Freetown to other ports, and from there by lines of communication to cause in a few weeks 1.5 to 2.0 million deaths. India was infected in October 1918 where the epidemic resulted in seven million deaths. The epidemic in North America caused approximately 600 000 deaths; in England and Wales the official deaths numbered 200,000 and a similar percentage of the populations of other European countries and Australia died, again within a few weeks. The death rate in Samoa and Alaska was 25% of the population Unique to this pandemic, deaths occurred principally in the group of age 20-40 years. Many countries experienced second (1918-19) and third waves (1919-20) of the more virulent form of infection. No figures exist for many parts of the world, but the pandemic is estimated to have infected 50% of the world's population, 25% suffered a clinical infection and the total mortality was 40-50 million: the often quoted figure of 20 million deaths is palpably too low.
RNA fragments have been recovered from preserved lung tissue of victims of the influenza of AD 1918-20: when transcribed to DNA and sequenced, these showed close similarity to the influenza virus isolated by Shope. Thus, the antibody studies of sera from persons who lived through the pandemic and the sequence data from the pandemic virus indicate that the 1918-20 pandemic was caused by an influenza A (H1) virus which is closely related to the virus later found in pigs and which remains an infection of this species to the present time. 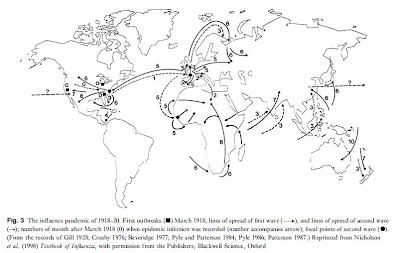