The book Gregory and Susan Michno, Forgotten Fights: Little-Known Raids and Skirmishes on the Frontier, 1823 to 1890, Mountain Press Publishing, 2008 lists 6 incidents directly in 1823, and indirectly others.  However, to give this a little more continuity, I have decided to stay with events that feature our friends the Karankawa.  However, first we will meet some friends of theirs.
In this next incident in July of 1823 they are only partially involved.  The other group involved is the Waco Indians: a sub-group of the Wichita.  During this time period the Waco along with the Tawakani lived on the Brazos River and were considered to be “Texas” Indians.  The other tribes lived north of the Red River , and within and north of the Wichita mountains.  The Wichita are often described as plains Indians, but they have cultural differences from the Sioux and Comanche.   Although they appear to have no tribal affinities with the Karankawa, that does not appear to have stopped them from working with them on this occasion. 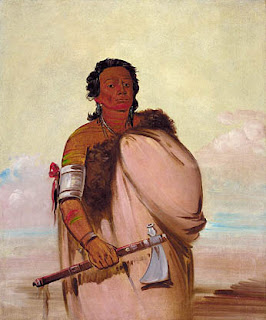 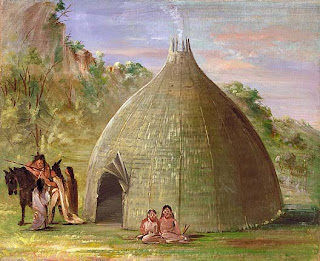 Whichita Grass Hut
As we said it is July of 1823 and …
Note, as with many of these stories there are variations in the exact accounting of the story.


Late that evening the posse crept up to the camp.  The plan was to surround the Indians and wait for dawn, but when Joseph saw a warrior stand up very close to him, he fired.  The Waco let out a loud scream as he fell, and the other warriors all jumped up.  Tumlinson’s posse blasted away.  In a few minutes, twelve Indians were dead, only one having escaped into the brush. Gregory and Susan Michno, Forgotten Fights: Little-Known Raids and Skirmishes on the Frontier, 1823 to 1890, Mountain Press Publishing, 2008.

[After numerous raids, Stephen] Austin authorized a retaliation.  Captain Randal Jones and twenty-three men canoed down the Brazos River in pursuit of the raiders.  Near Matagorda Bay they learned from some Karankawa that the band responsible had gone upstream to Bailey’s Store, about five miles west of present-day Angleton, Texas to get supplies and ammunition.  Jones sent a few local colonists to Bailey’s to lean the raiders’ whereabouts and to recruit more volunteers.
The settlers who lived near Bailey’s Store were already worried that the Karankawa band had bought the ammunition to use against them.  They formed an armed band, and at dawn they fired on the Indians’ camp, killing and wounding a few of them and driving the rest away.
In the meantime, Jones was bivouacked on a stream about half a mile from present-day Jones Creek, Texas, unaware that the main Karankawa camp was nearby.  When the Indians involved in the fight at Bailey’s returned to the main camp, they began lamenting their dead and wounded.  The cries were so loud that Jones was able to pinpoint the camp’s location.  He crossed the creek about half a mile above the camp and waited for daybreak.
Jones’s dawn attack surprised the warriors, but they quickly recovered, hiding in the tall marsh grass and returning fire.  In a short while, the Texans found they were in trouble.  The warriors kept up a withering fire from the marsh; Singer, Bailey, and Spencer were killed, and many were wounded. After weighing the Texans’ chances, Jones decided to retreat.  Jones estimated they had killed fifteen warriors.  The battle was later said to have made the Karankawa “more hostile and troublesome.”  Gregory and Susan Michno, Forgotten Fights: Little-Known Raids and Skirmishes on the Frontier, 1823 to 1890, Mountain Press Publishing, 2008.

Given the nature of the testimony, it seems possible that the Karankawa Band became hostile because they may not have had anything to do with the earlier attacks.  Even the first account has versions where it is not entirely clear what the intent of the Karankawa were.  Estimates of casualty are generally very unreliable unless a body is on hand or they can be separately confirmed by other sources.   Often the total killed, might equal the number injured.
In any case our good Captain Jones survived until 1873 when he died at the age of 86.  The Tumlinson family went on to have a long history with the Texas Rangers.
Why don't we do the little summary-bullet thing:

Texas settler John Jackson Tumlinson ,one of the three hundred , and organizer of some of the earliest Texas Ranger groups,  and a companion, Joseph Newman, were on their way to San Antonio to secure ammunition for Lieutenant Morrison’s militia company when they were attacked by a band of Karankawa and Waco neat the present-day town of Seguin on July 6, 1823.  The Indians killed Tumlinson, but Newman, on a fleeter hose, got away.  Tumlinson’s body was never found.

Upon hearing of the attack, Tumlinson’s son, John Jackson Jr. sought swift vengeance.  He rounded up a posse of eleven young Texans, including his teenage brother, Joseph, who would act as a scout.  The Young men set off after the Indians, following a trail that led northeast.  Young Joseph discovered  a camp of about thirteen Waco concealed in the trees on the east bank of the Colorado River, about fifteen miles above present-day Columbus, Texas.