We have been discussing (link, link2) the pandemic flu/influenza.

So what would a great influenza pandemic be like?  There are reports from the 1918 Spanish Influenza, but truthfully its death rate is not high enough in most places to give a true sense to the panic caused by a contagious disease for which there is no resistance [I was incorrect in this statement].  I also wanted something different.  It is a little like discussing societal collapse.  Everyone knows about the big ones like Rome, or the Mayas, but they generally have no idea about how many other societies collapsed over short periods of time.  I wanted an influenza pandemic that was different, but detailed enough to bring home the impact.

Unfortunately there is one group that can be used as an example, and while accounts are hard to find they do exist.

The Native Americans were susceptible to a number of European Diseases.  Many of these diseases have vaccines, are eradicated (small box) or rare in the United States (cholera).  One of the diseases that they are still susceptible to is influenza:  the flu.  During the last H1N1 outbreak in 2009, various native indigenous peoples from Australia to Canada to the United States had a 3 to 8 times higher rate of hospitalization and death.  Deaths Related to 2009 Pandemic Influenza A (H1N1) Among American Indian/Alaska Natives --- 12 States, 2009, MMWR, December 11, 2009.

During the great Native American die-off, influenza is one of the major killers.  But accounts of its effects are often buried in with the many other diseases that they died from.  However, I did find one clear account where influenza was the isolated culprit, and it is actually from modern times. 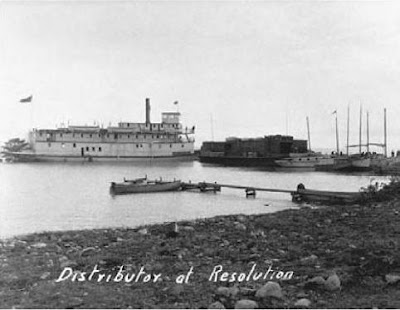 The Distributor at Resolution: the ship which the flu came on.
To the right are schooners with mast and sails, directly in front is a
modern canoe with kicker, and beached is an old style
birch bark canoe.

The Influenza Epidemic of 1928

In the summer of 1928, the Hudson’s Bay paddle wheeler Distributor carried influenza from Forth Smith to Fort Resolution and thence the length of the Mackenzie River.  Fumoleau has assembled white observers’ harrowing accounts of the suffering and deaths endured by the Dene as the flu swept fort after fort.  One estimate puts the death toll at almost six hundred.  I first learned of the 1928 epidemic from Louis Norwegian of Jean Marie River (“Lynx Point”).  “That time, all the old people die,” Louis told me, among them the leader and founder, Old Sanguez, of the Jean Marie River community.

Vital Thomas and I had touched on the flu epidemic of 1928 among the Dogribs in a conversation on July 4, 1969.   By his recall, about seventy-four Dogribs trading into Rae died. (The Rae mission books record sixty-eight deaths in 1928 up to November 12.  Between July 17 and August 24 there were forty-three deaths entered, many noted to be in the bush.)  The next day, Vital and I continued in more detail.

Mostly, it was all of the old-timers who died. Like medicine guys.  Not many young persons.  The first person to die was Old Lamouelle, Susie’s father. [Q: Who took care of the dead?] In those days, the Mounties were [already] here.  They hired Antoine Liske and Pierre Quitte and me, there were three of us for digging about two days.  The first day altogether nine died old people:  The second day, five or six.  A coffin comes and while we were burying one, another comes, and another. The poor relatives, they all cried.

The flu came in August, after Treaty payment, just before when the Indians leave to go back to the bush. [Were all the families in town as well as the men?] Like the people at Marten Lake [Wha Ti], some men had brought their families, some didn’t.  [After leaving the fort] some people died before they could get to the end of the lake [Marian Lake, heading for Lac la Martre].  There are graves all along the shore.  And when they came to Marian River Village [at the end of Marian Lake], about half a dozen died there, they said.  And going to Marten Lake, about half a dozen or so died before they got to the portage [probably the long portage at the Falls Nainliin].  At the same time, they didn’t have much to eat so they kept on going.  The sick caught cold traveling. If they had stayed in one place they might not have died.  As soon as they got sick they wanted to move, to get away from the others.

From here at Rae to Trout Rock [down the North Arm] and right to Yellowknife, quite a number died.  Because some of them had come from Indian Village [near the later site of the town of Yellowknife] to Rae, to the [Rae] traders to get supplies. And some went to Resolution. Those that had big boats [in which to cross Great Slave Lake] went to Resolution.  Those with only small canoes came here.

If one person died they wouldn’t spend a day at the place of the death.  As soon as they buried him, they moved on to the next island.  It didn’t matter if they were sick or not.  Then another one dies, so we keep moving.  That is why there are all kinds of graves between here and Yellowknife. [Why do they keep moving?]  Moving is the Indians’ way. In the olden days, when there is a death they were not supposed to camp there.  They had to move to the next island or point.

During the flu, some people had really bad luck.  Like Francis Blackduck.  He was married to his first wife that summer, Madeline Nitli. His mother-in-law was a widow. He’d just married and in there or four days the flu came. And as soon as some died here, he wanted to move to the west channel, where the bridge is now.  His mother-law and his father and mother and brothers and sisters were there.  He moved there, and in about two days later his father died. So he paddled here, he had no kicker then. He came to get boards for the coffin and he went to see my mother and asked if I would take some lumber back with my kicker.  My mother said all right.  The mission handled the lumber. Francis tells them that his mother and mother-in-law and brothers are sick and he don’t know if they will all live, so he thinks he should need lots of lumber. The priest gave him enough lumber for two or three coffins. So we go back there and his father is dying. While we are working on the coffin for his father, his mother died.  So we build another and by the time we finish his brother Alexis is pretty low. There are three dead now.  We made three coffins.  Two or three guys went to dig the graves.  We take the coffins to the graves and when we get back his mother-in-law has died.  So we got to make another coffin. We got to bury her but we have no more lumber. His brother-in-law, they called him Wew’aule, “He Doesn’t Speak Much”- is dying. We can’t stay at that place, so we move amongst the islands toward Old Fort. We went as far as the mouth of Stagg River, and there his brother-in-law died.

The bunch at Gros Cap, that was the worse. Some guys had just landed, coming from Resolution [their point-of-trade, across Great Slave Lake]. It was a big camp; there were maybe twelve or fifteen families at Gros Cap.  Charles Goulet was like a donek’awi [trading leader] for the Gros Cap people, so lots of people followed him, he’s got a big camp.  Most of the people had long houses. They said that they found out about the sickness while at Resolution.  But some bugger made a story about how home brew was the only medicine for the sickness. The Gros Cap people had it in the canoes, and they landed at home and started to drink, singing all night.  The next day they all dropped dead, caught cold. They sent for the police [from Resolution], and an old priest came with him. There were guys lying on the floor and in between the housed, drunk, dead.  When the priest saw all of that, he was crying. That cleans the whole village, in one group, the lake people, like. [According to a traders’ wife, twenty-six persons died at Gros Cap, ‘the seven survivors having fled in panic]. The police shot all the dead peoples dogs.