The Noah Countdown: The Review 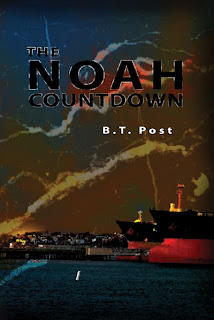 Is an unusual pre-apocalyptic countdown book.  Much of it has certain affinities with the famous novel One Flew Over the Cookoos Nest﻿ by counter culture 'hero'  Ken Kessey.  Unlike Kessey, the author does not believe that the inmates are sane, but she does make a strong point the psychiatric institute for profit leads to a setting where the inmates are not much worse then the caretakers.  Our current society leads us to behave in ways are not necessarily crazy, are simplistic and wrongheaded, and abusive of power.
Bud is a writer who gains information that is dangerous to various powers that be.  Through a various odd set of circumstances he winds up unconscious and taken to the hospital.  This lands him through various medical mechanisms in observation (to see if he is crazy) at a psychiatric hospital.    So there is a bit of irony, in that you have  a non-crazy person stuck in a mental hospital, and cannot get out while the world is ending.
The mechanisms for the end of the world are done through explanatory dialog (really monologue) in the middle section of the book.  Then for unclear reasons are restated at the back of the book.
Without giving away too much of the book, it is suffice to say that there are good guys anticipating an end to the world ,and bad guys.  The bad guys may not be the primary cause of the world ending, but they are not doing much to stop it either.
The book appears to be primarily a call to action for people to begin preparing their little arks to see themselves through the coming disaster.  The lead up to the coming disaster is better thought out, and with deeper historical depth than many such offerings.  Unfortunately, as I will note, some failings and unevenness from the plotting keep it from being as strong of a vehicle for its message then it might have been.
The sections within the psychiatric hospital are well done, and the theme of societal psychosis is reasonably well done.  The language and development are certainly better then the standard post-apocalyptic book, and somewhat in line with some of the more literary offering in the area.  link  link2  The world itself seems a bit cartoony.  Given some of her comments on sports, one suspects that she feels that our cultures view of reality is  a bit of cartoonish.  So possibly the cartoonish aspect of her novels reality is intentional.  But it is a little hard to feel much empathy for the coming suffering of such cartoonish masses.
The book holds together to the midpoint where the first monologue explanation of our coming doom takes place.  This monologue breaks the two main threads of action. After the first monologue,the novel becomes overtired with the repetitive dialog, and a plot device dealing with bad-guy skulduggery that tends to reduce the impact of the message.   The action scenes themselves seem to more unwind like a big roller coaster ride; lots of ups and downs but with the main character staying in their seats, and outside of some 'hand-waving' remaining rather passive. The final resolution with the main bad actor is almost bizarrely abrupt.
The book does not bring any particularly strong historical examples of what a better society will look like.  It notes that Cuba went through an oil crises when it was cut off from supplies with the end of Soviet Communism:  but notes that the Cubans are a rather mixed bag  as a model to follow.  It notes that many ancient societies, and the native Americans lived in harmony with their surrounds.  But as we have noted here, that is a bit of a white wash itself.  As with most stone age cultures, the Indians seemed to have civilization cycles of longer duration then modern ones, but they were not in a stasis.
I would say it is about half of a good book with a post apocalyptic theme, if not exactly post apocalyptic action.   For myself, I would put it's value leaning toward the positive.
Posted by russell1200 at 5:20 AM