These events are real.  They are from appellate level court documents in North Carolina.  I have changed all the names to protect the innocent and guilty.  It is a bit convoluted but a very worthwhile to see what exactly is happening out there.  This is at the appeals level so the actual events are not in dispute.  If it will help, "Latamore" is the defendant in this particular case. Obviously he was not the only defendant.
Note that prior to these events, one of the participants was apparently featured in a reality T.V. show as a person of interest in a home invasion in Florida that lead to the death of a drug dealer in a home invasion.   It came up because one of the officers who saw him while all of this was going on said that he kept thinking how he looked familiar, but could not remember where he saw him.   So while there is some Keystone Cops (video) aspects to some of this, these are very dangerous people.
To keep this from getting too unwieldy I will have a plain language summary and conclusions in part II.

The State’s evidence tended to establish the following events.
In late August 2008 in Orlando, Florida, Marlene Wilson approached a couple of her friends about joining her in a robbery of a purported drug dealer who lived in North Carolina. When the two friends, Terence McCoy and his wife, expressed interest in the plan, Marlene told Terence that he could bring one man to assist in the robbery; Terence recruited his friend Bernard Regal. A few days later, Wilson, the McCoys, and Regal traveled to Fayetteville, North Carolina and began preparations for the robbery.
Two members of the group stole several zip ties from a hardware store, with which they could bind their victim to prevent escape, and stole a car from the hardware store’s [one of the Big Boxes] parking lot for use during the robbery. After casing the homes of several potential victims, the group focused their attention on Ms. Charlotte Kurtz. Wilson believed that a suspected drug dealer, Glenn Arthur, was living with Ms. Kurtz and her son and would have a significant amount of cash to steal. In order to determine what Ms. Kurtz looked like and where she lived, the group stalked Ms. Kurtz, observing her at her workplace and following her home to Raeford, North Carolina. They returned to Ms. Kurtz’ home later that evening, but drove away when neighbors became suspicious of their activities.
Having settled on Ms. Kurtz as their target, the group paid a visit to Latamore to recruit him to participate in the robbery. Accepting the offer, Latamore said he was “ready to go” and brandished a semi-automatic pistol from his pocket. Wilson instructed the group on their duties for the robbery: Regal was to be the driver and lookout, while McCoy and Latamore were to be the “muscle” of the plan who would enter the home and rob the victims. Later, Wilson borrowed a pistol from a family member so that both McCoy and Latamore would be armed.
On the morning of 29 August 2008, the plan was to intercept Ms. Kurtz as she was leaving her home to take her son to school, then to force her back into her home and to rob her. That morning, two men in the group prepared the get-away vehicle by replacing the license plate with a stolen plate and placing a gas can in the car. Later, they filled the gas can with gasoline with which they intended to douse the victim and threaten to set her on fire if she refused to cooperate.  Regal, McCoy, and Latamore drove to the victim's neighborhood where Latamore and McCoy exited the car with their guns and hid in the woods near Ms. Kurtz’ home. Regal parked the car near the entrance of Ms. Kurtz’ driveway and slumped down in the front seat. Suspicious of this activity, two neighbors called 9-1-1. Shortly thereafter, an officer from the sheriff’s office arrived on scene and pulled up behind Regal's car. When the officer activated his lights, Regal sped away, but then jumped from the car and fled on foot. As the officer gave chase, Regal ran into the woods to hide, where he saw Latamore and Terence McCoy. Regal testified that the officer then began his pursuit of Latamore and McCoy as they stashed their guns under some leaves and fled from their hiding place in the woods——“‘cause they see what’s going on now.”
Later that afternoon, Wilson, Regal, McCoy and his wife regrouped without Latamore and discussed whether to rob a different dealer or attempt to rob Ms. Kurtz a second time. Despite the attention they drew from the neighbors and the sheriff’s office, the group decided they would attempt to rob Ms. Kurtz at her home again. In preparation for the second attempt, the group replaced their get-away car by stealing a truck from a mall parking lot, purchased two jump suits and masks, and two prepaid cell phones. Regal and McCoy returned to the woods near Ms. Kurtz’ home and retrieved their guns— again prompting the neighbors to call the sheriff’s office.
On 30 August 2008, Regal, the McCoys, and Wilson began looking  for Latamore to execute their second attempt to rob Ms. Kurtz. The group, without Latamore present, discussed robbing a different drug dealer and drove by a potential victim’s home to survey the area; ultimately, they resumed the plan to rob Ms. Kurtz. That evening, the group picked up Latamore and waited in a parking lot for Ms. Kurtz to leave work. Upon receiving word that Ms. Kurtz was on her way home, Regal drove Latamore and his accomplices to her neighborhood. Terence McCoy and Latamore exited the vehicle and hid in the woods close to Ms. Kurtz’ home while Regal drove to a nearby gas station to wait. Latamore and McCoy were observed by Ms. Kurtz’ neighbor, Roger Adams, who called 9-1-1, grabbed his pistol, and walked to Ms. Kurtz’ yard to investigate.
Adams proceeded to walk towards Ms. Kurtz' backyard with his gun, asked Latamore and McCoy what they were doing, and both men fled. Adams alerted another neighbor that Latamore and McCoy were headed in his direction. This second neighbor stopped the two men at gun-point, but both fled again into the woods. While Regal was waiting in the get-away vehicle at the gas station, a police officer pulled up behind him and Regal sped away. After a brief chase, Regal crashed the vehicle and he was arrested. Regal cooperated with the police, providing details of the plan to rob Ms. Kurtz and offered to help locate Latamore.
On 3 September 2008, the police arrested Terence McCoy and his wife, Towanda McCoy. Ms. McCoy cooperated with the police investigation and took the police to Latamore’s residence. The police subsequently made numerous attempts to find Latamore and on 30 October 2008 contacted the United States Marshals Service for assistance in finding Latamore. On 8 January 2009, U.S. Marshals arrested Latamore in Lee County, Mississippi. 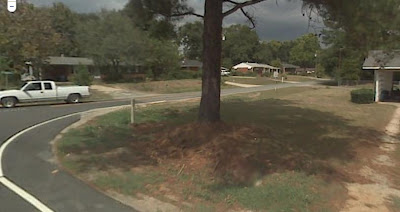 Not the actual area of incident, but nearby:  ranch homes with a little separation, and mostly level ground.
Posted by russell1200 at 9:33 AM