Skirmishing with the Karankawa

One of the main difficulties with discussing low level non-military skirmishing is that there are relatively few examples of it in modern time.  There are many examples of heavily equipped military units, and many examples of people fighting within a law abiding setting.
However, historically these situations are not that uncommon and go right up into the gunpowder period.  If you read the accounts of these clashes you will see that although the (sometimes) less sophisticated nature of their weapons occasionally has an effect on the situation:  the effect is much less than one would suppose.   For reasons that are bit murky, people today seem to greatly underestimate how dangerous even single shot firearms where/are.  They don’t seem to understand that even relatively small groups with firearms where able to fend off attacks:  people just are not so suicidal that they are in  hurry to run up to point blank range and take a bullet in the chest.  That the bullets these guns fired were roughly twice as damaging as the fmj rounds used today no doubt contributes to that reluctance.
Going forward, I am going to take a number of examples from Gregory and Susan Michno, Forgotten Fights: Little-Known Raids and Skirmishes on the Frontier, 1823 to 1890, Mountain Press Publishing, 2008.  If you are little interested in seeing what  small group fighting in “no-rules” settings may look like, and suspect that the Mad Max series may not be the last word, it is a good place to start.
Our first encounter is in the spring of 1823 and occurs near Skull Creek Texas. 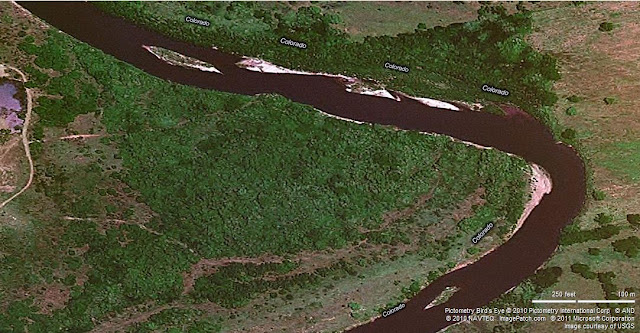 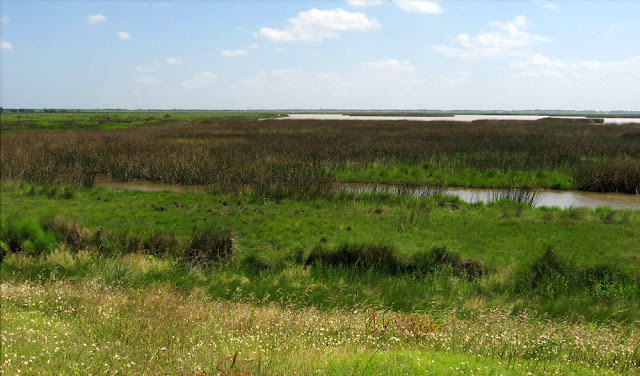 Low level swamp land typical of coastal Texas
Stephen F. Austin received permission from the Spanish to settle 300 families in Texas.  Known as the “Old Three-Hundred” these settlers almost immediately began to fight with the local natives.  The early fights were with the Waco, Tawakonis, Karankawa, Ioni, and Anadarko.  The Comanche  (who we met in a disguised fashion earlier) were to come later.

The Karankawa had a pretty evil reputation.  James T. DeShields in Border Wars of Texas notes that they were the most ferocious of the early tribes that the Texans faced.  They had much earlier helped in the destruction of the earlier French Settlement Fort Saint Louis in Texas. In this incident, when they realized the weakened state of the French, they pretended to be friendly and ambushed slaughtered them when they were unprepared.  In this earlier incident they had followed the very typical Native pattern of killing all the adults and adopting the children.


The Karankawa's favorite weapon, the weapon they are famous for, is the long bow. The Karankawa used powerful bows that were as long as the bow user was tall. Remember, the Karankawa men were often over 6 feet tall. The arrows they used were long lengths of slender cane. These arrows were often 3 feet or more long. Long arrows like these are better than short ones when shooting at fish, alligators, and things under shallow water. The end of the arrow would stick up above the water surface and show where the animal was. It made these arrows easier to retrieve. Short arrows would go under the surface and get lost. From Karankawa Fact Sheet.

A drought in the spring of 1823 made farming difficult, so Clark, Alley, and Loy had to bring food supplies from the Gulf Coast.  Ascending the Colorado River with a canoe load of corn, the men got as far as the mouth of Skull Creek, near present-day Eagle Lake, when a band of Karankawa Indians attacked them.  Alley and Loy were killed instantly.  Clark was wounded seven times, but managed to swim to the opposite bank and escape by hiding in dense thickets.
Later that day, colonist Robert Brotherton unluckily encountered the same band of Indians.  Believing them to be friendly Tonkawas, he rode up to them. When he got close, the Karankawas grabbed him.  Losing his gun, Brotherton struggled and managed to escape, but not before taking an arrow in his back.  Reaching the nearest settlement, Brotherton spread news of the assault.
Colonist Robert Kuykendall gathered about twelve men, plus the Tonkawa chief Caita, and rode after the Karankawas. The Tonkawa chief was brought to insure good behaviour from his people while the settlers were away. That evening Kuykendall’s posse found the Indians camped in a thicket near the mouth of Skull Creek, pounding briar root, seemingly oblivious to the possibility of a pursuit.  With first dawn they were able to find a small path into the encampment. , and to crawl in as quietly as possible. Kuyedall placed his men in a semicircle around the camp, cutting off the Indians’ escape route to the swamp.

When the first warrior arose, the settlers charged in, firing left and right.  About ten warriors were killed on the spot.  Of the remaining dozen who broke for the marsh, about ten more were killed.  Only a few made it through, and they may have been wounded.  Kuykendall destroyed the encampment and returned home.  The Karankawas vacated the area and left the colonists alone for a time.  Later Karankawa raids would be made with more stealth and precation. Gregory and Susan Michno, Forgotten Fights: Little-Known Raids and Skirmishes on the Frontier, 1823 to 1890, Mountain Press Publishing, 2008.  Italics are from James T. DeShields,  Border Wars of Texas, 1912.

In this instance the lack of firearms may have hurt the Karankawa.  As we will see later some of them did have firearms.  However their general lack local security and their unpreparedness for the possibility of pursuit/tracking is seen time-and-time again on both sides.  In both engagements noted above, the side with surprise won. 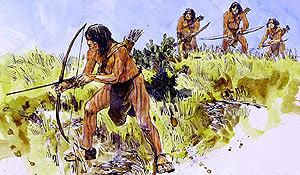 Karankaw warriors (by Charles Shaw)
Posted by russell1200 at 5:45 AM