Edward Abbey was a radical environmentalist.  He has been referred to as the Thoreaux of the American West.  He has also been accused, through his book The Monkey Wrench Gang of inspiring the eco-terrorist movement.

I have only read one of his books.  A novel going by the title Good News: A Novel written in 1980. 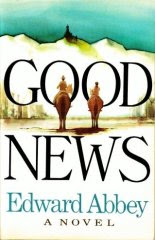 ﻿Within the genre of post apocalyptic fiction  it is literary work.  Although not Theroux, the author has clearly spent time outdoors doing at least some of the things that the characters within the book are doing.
It is a true post-collapse novel.  The Causis Collisio (the causes of the crash/collision) causis a prelude that explains that the a mid-east war sparked a conflagration of small wars that eventually collapsed industrial society.  The book is set in an Arizona were there are still some survivors in the cities, but they are not doing well.   The feel of the book is an odd combination of a western cowboy meets road warrior meets Conrad's Heart of Darkness, meets magical realism.
A cowboy heads into town looking for his son,  he runs into a mad military officer setting out to reconquer America.  Some of the characters display limited magical abilities.  They don't through fireballs and lightning bolts, but the rarity of what they can do gives it a huge surprise factor.
The cowboy is symbol of courage, freedom, and liberty.  The officer would be technology, repression, industry, forced conformity.  The officer is very well read in the great philosophers, but may not survive the simple philosophy of rugged independence expressed by the cowboy.
The book is not always particularly realistic, but does have a certain element of truth to it.  Various small groups with variously limited means fight over what limited future they have.  Without really trying to make a point of it, it illustrated the vulnerability of small scattered ranches to even relatively small gangs.  The very small number of people involved leads to a lot of trickery and randomness when people get into a fight.  It also shows that some people will fight obsession, others will be more than happy to go along with it, and others will due what ever it takes to make it to the next day.
Posted by russell1200 at 5:20 AM