Why We are so Optomistic!

I had a brief online discussion yesterday.  In it I mentioned that the reason why people have these odd ideas about economics, and to be removed from economic reality is because of the assumptions they make.
Why do the may these assumptions?  Because they are told that these assumptions are correct.
Who tells them this?  Well, O.K. we know that a politician is going to take his economics advice from whichever people it is in his best interest to listen to.  That is natural.
But what about business people, and your common grunt-level financier, or even stock broker?  How do they make their assumptions?
Well let us remember that our financiers generally make more money off our spending, than our savings.  The Feds will give them money to lend, but they need buying to justify their lending.  Also recall that most corporate CEO tenures are around 6 to 7 years (almost 12% chance of being fired each year), and that they only have a limited time span in which to make their money.  Also recall that the financial news and press makes their money advertising and selling services to happy financiers.
But first let us look at a Federal Reserve Bank release from this Monday February 7, 2011.  It may be easiest if you want to look at the numbers to print from the Consumer Lending Report link, and use the outlined boxes to follow what I am talking about.  Otherwise you can just take my word for it.
The Federal Reserve Bank released its Consumer Lending Report Monday.  Consumer credit did go up a little [yellow box below], and that looks very recovery like, but  revolving credit (a.k.a. credit cards) [top number in the red box] goes down, and nonrevolving (a.k.a. loans on a payment plan)[bottom number in red box] went way up. 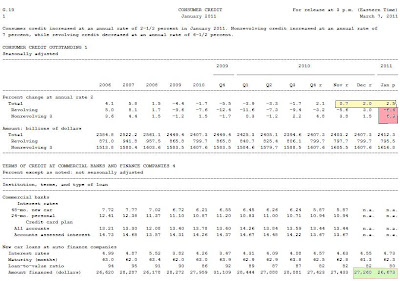 When you drop down to the bottom of the page, you can see a general slight decrease across the board. But there is  big increase increase in lending from the Federal Government [yellow box below and Note 5] for student loans. 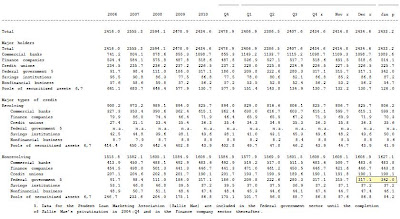 O.K.  all of this is sort of interesting.  You have consumers continuing to decrease their revolving debt, but getting into more debt overall by going to school.  That could be read a deep dig in as consumers feel they will be better off in school, and are spending a little less on their credit cards as they go forward with their plans.  This is not the only explanation.  But it certainly is a plausible one.  But would you say that it is a positive report?   The wall street journal seems to imply we have gone on a optimistic spending spree.
Consumers Ratchet Up Borrowing﻿

Consumer credit, which excludes real estate loans such as home mortgages, grew at a 2.5% annual pace to $2.4 trillion, the Federal Reserve said Monday. A nearly 7% increase in non-revolving credit—including loans for autos, boats and education—drove the gains, while credit-card debt fell to a new six-year low as consumers continued to pay down debt or default on loans.
The increase in overall credit comes at a time when U.S. consumers have been ramping up their purchases of big-ticket items such as new cars, encouraged by extremely low rates on financing. Light-vehicle sales in January and February combined rose to about 1.8 million, up 22.5% from the same period a year earlier, according to Ward's AutoInfoBank.
Meanwhile, the relatively weak economy may have also led consumers to rely more on loans in some areas. For instance, federal student loans jumped in January to drive much of the increase in non-revolving credit. Sudeep Reddy, Consumers Ratchet Up Borrowing, Wall Street Journal, page A5, February 8, 2011.

You will note the cagey language.  But after setting the tone with the boisterous language at the top of the report they finish with:

The cutbacks in credit-card debt reflect consumers choosing to pay down debt and lenders writing off overdue balances.
Credit-card borrowing fell consistently starting in September 2008, as the financial crisis struck and consumers reined in their spending after years of relying heavily on plastic. It rose in December before dropping again amid the snowy and cold weather of January.

After the spending spree language, it leads you to believe that either the belt tightening is behind us, or it was due to cold weather.  Because you see there is rarely cold weather in December.
Is it subtle. Yes.  But remember, it is one thing to cheer lead to the general public in general news reports.  The Wall Street Journal is supposedly geared toward savvy investors, and financial professions.  They wouldn't try to throw a curve at them would they?
They do it all the time.
So the answer to why people believe that our future was is of ever increasing expansion that will cover over the problems of debts?  Because it is built into the system.  It is in the vested interest of the participants within this system to continue it, and the providers of information who might check some of this optimism also have vested interest in keeping this system going.
The politicians are just along for the ride.
Posted by russell1200 at 4:35 AM