Running out of money is no fun

As the British are trying to cut back on their deficit,  quarter of a million people peacefully protested. Five-hunderd people protested in an unpeaceful way. 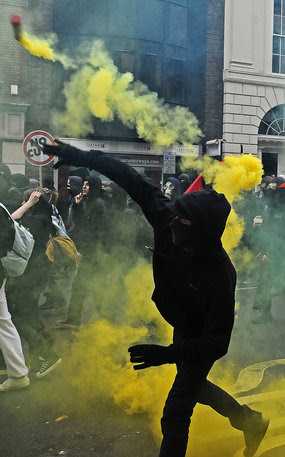 The black-clad anarchists were a breakaway group from a quarter of a million people who marched to protest against the British government's austerity measures.

Clothes store Topshop and bank HSBC had their windows smashed, while some protesters hurled missiles at London's landmark Ritz Hotel.

Others lit a bonfire in the shape of a Trojan horse at Oxford Circus, in the heart of the shopping district.
Thirteen people were arrested for criminal damage and public order offences.

Five police officers were injured, with one being taken to hospital, Scotland Yard said.


Meanwhile the Cleveland Fed says we are paying more for stuff.  Particulalry for fuel.  Note that these are monthly numbers so in annual terms the increases really add up.  Energy is up 7.3% in year over year terms.

The Cost of Food and Energy across Consumers
Daniel Carroll

It should not come as a surprise that people are particularly concerned about increases in food and energy prices, whether the increases are large or small. Not only do energy prices pass through to other prices, but household expenditures on food and energy make up a significant fraction of total household expenditures. Data from the BLS Consumer Expenditure Survey show that on average from 1999 to 2009, energy (including motor fuel) and food at home accounted for more than 15 percent of total expenditures and 13 percent of after-tax income.

For those astutely wondering why food and energy expenditures are a larger fraction of total expenditures than of total income for the bottom 20 percent, there is a much higher fraction of households in this quintile which may be using savings and credit markets to consume above their annual income. Likely categories are the unemployed, business owners with temporary losses, students living on loans, and retirees drawing down their nest eggs.