Bahrain: The Next Domino?

From Google News
Saudi troops have entered Bahrain: Saudi official
(AFP) – 1 hour ago
DUBAI — More than 1,000 Saudi troops, part of the Gulf countries' Peninsula Shield Force, have entered Bahrain where anti-regime protests have raged for a month, a Saudi official said Monday.
The troops entered the strategic Gulf kingdom on Sunday, the official told AFP, requesting anonymity.
This follows events from this weekend as reported this morning by the Wall Street Journal:
Police firing tear gas and rubber bullets were unable to disperse thousands of mainly Shiite antigovernment protesters who blocked roads and prevented access to buildings in the capital's financial district, posing a further threat to the island's shaky economy.
After briefly succeeding in pushing back about 350 protesters to their stronghold at Pearl roundabout in the morning, the police were later overwhelmed by thousands of demonstrators who occupied a nearby elevated highway and marched back toward the financial district. By evening, protesters set up a series of roadblocks along the King Faisal Highway running through part of the financial district, in an effort to prevent commuters getting to work Monday morning...
It was the second major clash between police and protesters since the military was ordered off the streets nearly three weeks ago. On Friday, hundreds were injured in clashes when demonstrators marched on the royal family offices in Riffa, south of the capital, where they were met by police and hundreds of Sunni government loyalists armed with swords, sticks and clubs.
Bahrain, which holds a strategic position in the Persian Gulf, hosts the headquarters of the U.S. Fifth Fleet, home to 3,000 military personnel who oversee 30 naval ships and some 30,000 sailors…

The influence of Iran, which is a focus of anxiety for Bahrain and other Gulf states, was a subject of discussion between the U.S. defense secretary and the ruling family. Alex Delmar-Morgan, Bahrain Protest Overtakes Police, Wall Street Journal, March 14, 2011. 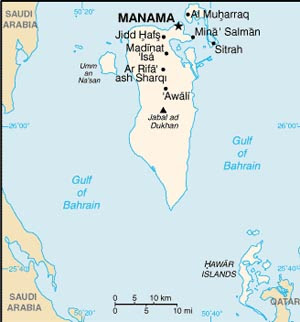 Bahrain is a small country with a very dense populated country with a little over 1 million natives living within an area roughly 4 times the size of Washington D.C.  Eighty-nine percent of those people live in the two cities of Manama and Al Muharraq.  There is a population of foreign workers equal to almost half the native population.

About 2/3 of the native population are Shia Muslims, but the ruling class is Sunni Muslims.

They have modest oil and gas exports equal to a little over 10% of their total GDP, but this makes almost 70% of the governments income.  These reserves are expected to last another 1o to 15 years, and the government has been trying to diversify the economy.  Bahrain was caught in a financial-commercial construction bubble that lead to its bailout by Gulf Cooperation Council of the UAE, Bahrain, Oman, Kuwait, Qatar and Saudi Arabia.

Bahrain has been the Arabic country that has tried the hardest to liberalize its economy and move away from the dependence on oil and natural gas:  In their case by necessity as they have less of it than many other countries.  Presumably they would like to model themselves something along the lines of a Middle Eastern Singapore, or possibly a Zanzibar without (we hope) the slave trade.  Their emphasis on rental economics of real-estate, and financial services, is probably not the best of signs.  Extractive economics requires someone to extract from, and with the rest of the Middle East not generating much income outside of commodities would seem to limit this potential.