Alex Adam's White Horse is a plague-driven apocalypse-in-progress novel with action at various times in Portland Oregon, Italy and Greece.  It is a bit of a reverse Odyssey.  Instead of Penelope waiting for Odysseus to come home to her, our Penelope (named Zoe) goes looking for him.  It is a standalone novel, but is stated as being the  the first part in a trilogy. 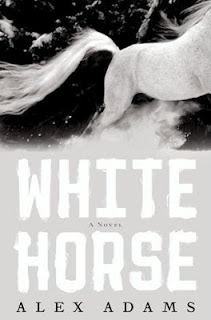 Alex Adams, from her sites biography, was born in New Zealand, raised in Greece and Australia, and currently lives in Oregon.  She apparently is a fan of PA-computer games including Fallout 3, and along with a general fascination with the idea of a coming apocalypse has read at least some of the classics of the genre.  The book itself has a promotional page with sample sections.

The story is split as a "before and after" story.  One thread occurs in Portland, Oregon, and is told in the immediate lead up to the disaster, with the second alternating sections being the "disaster now" running commentary.  The apocalyptic sections start in Italy, with our heroine trying to make her way to a safer location, while keeping her moral compass somewhat intact.

At a nice interview at the Post Apocalyptic Book Club she notes that she took care in trying to get the details down.

The biggest challenge was really figuring out the logistics. Things had to make sense. I couldn’t have 90% of the world’s population dropping dead within a week, and I couldn’t have Zoe walking across Italy in two days. So I did a lot of number crunching and spent a long time poring over Google Maps. Also, I did a lot of shaking my fist at the ceiling and swearing, because sometimes what I wanted to do wouldn’t work in any universe with real laws of nature.

The "logistics" are fairly seamlessly weaved into the telling of the story.  Its not one of the type of story that is going to go into the carbohydrate needs broken down by food type.

The collapse itself is interesting.  The pandemic is a viral cancer that causes severe mutations.  Mostly it kills people: 90% of them.   Of the other 10%, half-of them survive with (usually) disabling mutations that give a zombie-like cast to some of the proceedings.  The other half are simply immune.  Zoe is immune.  But she is having a baby, and in the chaos of the collapse, birth control with her new love was a bit sporadic.  It is not clear until the end why her lover is not with her (and I won't tell here),  but she is trying very hard to get to him.

Along the way, she meets some very unsavory people, and some normal helpful people.  Some times the unsavory people wind up being helpful in spite of themselves, and the normal people she tries to help turn out to be a liability: sort of like life.

Did I like it. There was a point about 2/3rds of the way through where I did start getting a little tired of the continuing journey.  Some of the happenings were a bit surreal and over the top, which lost a little of the mid-story tension.  But it ended on a strong note, and is one of those relatively rare novels that ends strong without turning itself into a cosy.  Our heroine while hardly being a bible-thumping moralist, tries very hard to help people and do the right thing. So by the time I arrived at the end of the tale, I was happy.

For our descriptive (versus qualitative) ratings:

Realism:  the nature of the plague has a science fiction speculative aspect to it. There are other collapse issues, but it is the eponymous White Horse plague that dominates.  It makes for an at times harrowing story, but not exactly one that I find myself much worrying about.  If we manage to get ourselves killed off by a plague, it is unlikely to be anything nearly so interesting.  There is some concern for food and shelter, but with 90% of the people gone, scavenging for materials is not all that difficult as we are less than a year (as I read it) into the full collapse.  I am gone to say that the fantastical balances out reasonably well with what is real, and say that it is at the mid-point of 4.

Readability:  the authoress uses a clipped page turning style of writing on what is actually at times a rather ruminating, pondering novel.  It is an unusual mix, but it keeps the navel gazing somewhat in check.   What symbology is there seems rather obvious.  The jumpy writing, and occasional half-explained event, can be confusing at times.  So as a quirky non-page turner written in a page turning style, I will put it above the median at 5.

More importantly (?), she seems to have a fondness for cats.  And possibly black cats in particular.