Recently released from the census:
This report comes with a number of charts'  First we show the changes in median and mean (average) income.  As noted above the median is where half the people are above you and half below you.  It is not as sensitive as the average (mean) is to some extreme outliers.  If you have 100 people at a cocktail party and Bill Gates walks in, by the average you have the wealthiest cocktail party in America, while by the median (where Bill gates is just one data point) the wealth has only shifted over to the next wealthiest person. 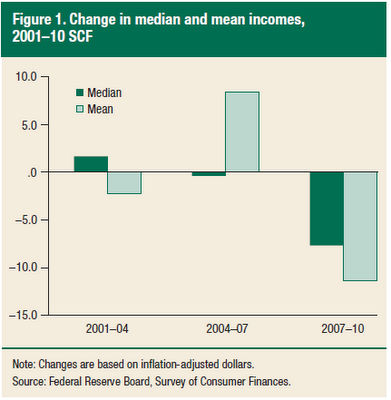 So note the huge surge in incomes during the housing bubble of  2004-2007 by the average (mean) shows that most people did not see any increases.  In fact they lost a little bit of income.  A loss that rapidly accelerated going into the downturn.  In the downturn, the wealthy, probably because they had more to lose, went down by a greater percentage.


I am hoping that you can click to expand on this chart (blogger seems to be doing that now).  If not you will have to go to the Census Report (pdf) and look on page 17. 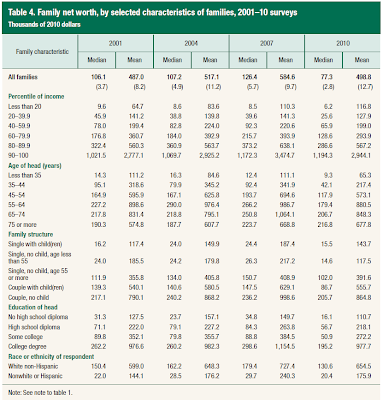 There are all sorts of interesting things to see.  We will ignore the average (mean) because I will assume that there are not too many high level bankers coming here for their financial information.

If you go to page 45 of this report, the report does not break down the ages into the same groupings, making direct comparison difficult.  But they note that the median primary residence of a 55 to 64 year old as being of $220,000 in value, and of a 65-74 year old as $209,500.  This implies that there is an awful lot of debt dragging peoples "net" value down.

Sure enough, if we go to page 57, we find that of the 55 to 64 year old crowd (the boomers) 82 % of of them are in debt.  The 65 to 74 year old group has a still surprisingly high 66% indebtedness ratio.  Given that this crowd got to enjoy the absolute heart of the post World War 2 boom, that is a little surprising.  If you go to page 59, you will see that most of the debt against these groups homes is not on the value of the home itself, but that the home was used to secure "other" debt.  So the seniors with homes, used drew out the value of the homes (reverse mortgages, home equity loans, consolidation loans, student loans, etc.) to pay for something else.  Ouch.

One of the traditional pass down economic boosts that one generation passes on to the next is the value of its hard assets.  When you look at Medieval Europe's economic activity, that is often just about all a generation could give to the next.

So as a group, we are making less money, getting more in debt, and drawing down our asset values.  Does this sound like a healthy country?  And we are not yet even into the heart of the baby boomer retirement years.

Like the bumper sticker said "we are spending our children's inheritance"

The Boomers ruined it for us all but in all fairness it was the greatest generation that let it happen.

PP: Absolutely. The Boomers did the individual acts, but it was mostly the Greatest that enacted the policies.