Cynthia Kraack's  Minnesota Cold is a post-apocalyptic, dystopian novel set in a Minnesota of 2035 that is recovering from the effects of nuclear war.  It is post-apocalyptic in that the area has settled down, and the issues of the disaster itself are seconard at most.  The dystopian comes from the greater "Minnesota Territory" being run in a high tech, but low resource Fascist Homeland Security remnant. 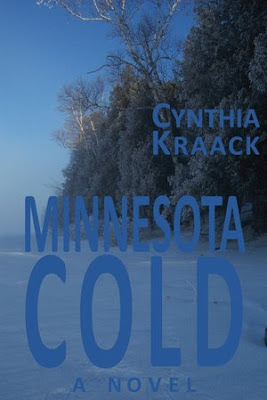 Cynthia Kraack was born in Wisconsin. She graduated  from Marquette University’s College of Journalism,  later she earned a Masters degree from the University of Minnesota in labor economics and educational psychology and graduated from the University of Southern Maine Stonecoast MFA Program in Creative Writing. Ms. Kraack initially worked in corporate communications  in Milwaukee.  She now lives in Saint Paul Minnesota with her husband, and has two children.  Ms. Kraack has a second novel, Ashwood, that is also set in a near future Minnesota which is slowly collapsing under the weight of the declining global economy.  It does not appear to be either a sequel or prequel to Minnesota Cold.

I decided to read this novel, out of the many options I have on hand, because I had read a couple of other apocalyptic novels set in Minnesota (Memory Boy and Deperate Times) that were going to be in this round of reviews, and thought I would round out the obvious grouping.  There is yet another novel, an urban fantasy of a sort of  voodoo-tech punk styling, by Emma Bull, Bone Dance, that is set in a post-apocalyptic Minneapolis.  So if you are looking to make your survival decisions based on PA novels, you might want to avoid Minnesota as potentially dangerous territory with apocali thick on the ground.

In our story here, the war started in 2015.  The Middle East was annihilated.  Nuclear winter and fallout ensued.  The U.S. territory is not effected by the war directly as Washington D.C. is still standing.  By 2016 the weather had cleared some and the various pieces were putting themselves back together.    The United States has broken up into twelve independent governments loosely associated together for purposes of foreign relations.  "Minnesota" is organized along the boundary lines of the old Federal Reserve Ninth District boundaries including parts of Wisconsin and the Dakotas.

During the troubled tiems, all of the 12 United States Districts close their borders to the desperate crowds of immigrants, and it is the start of internal travel controls within the greater United States.  Eventually, Minnesota throws out all foreign born people residing within the State (legal or otherwise) who can not demonstrate necessary skills.  The narrator's husband is the highest ranking U.S. official (a Federal Judge) left in what is now referred to as the Minnesota territory.   The nararator refers to the government structure as capitalist-fascist.  But doesn't seem to have a clear idea of what exactly that would mean.  Facism and communism share a lot of characteristics, and she actually does a fairly good job of making it a communist one.  Rationing, almost by definition is the abrogation of pricing as a mechanism of distribution, and would normally be thought of as a more "communal" method:  what we have here is a lot of rationing.

Although not a lot of details are given about the other eleven territories, Minnesota is not one of the nicer of the places to live in post-apocalyptic America.  Courts are closed to all but business cases, and the news services have been organized so as to become part of the government.  Restrictions on medical care are begun.  At the time of the story, the other eleven territories are beginning to reintegrate their court systems.  Minnesota has closed down the Federal courts and going it alone.

The story begins with Sarah Dodge finding out that she is terminally ill, and that the territory will not provide the resources to extend her life further.   They are not killing her actively, just withdrawing support.  However, Sarah is suspicious and thinks their role may be more of an active one.

At this point, we are barely into our story and we are hit with an odd extended interlude where the narrator in looking over her life experience relives her bitter early years when she first moved to Minneapolis and had a child with what eventually came to be an abusive husband of Puerto Rican dissent.  As the novel continues, these extended flashbacks to family issues, of various relevance to our story line, continue.

Between the family interludes, the novel at times it is trying to push into John LeCarre territory- a combination of who-done-it spy novel, with speculations on the true nature of our society.  But the espionage revelations come too easy.  At one point of deep mystery, the spy-types just drag Sarah into a secure office and tell her what is going on.

Both themes get intermingled with a fair amount of  upper class baby-boomer self fulfillment.

Doug thought the Baby Boomers' combined life experience would be more of a threat to Minnesota [powers that be] than our use of resources [as they got older]..(Kindle 873 of 4423).

Yes those boomers with their dangerous life experiences! LOL - do they ever quite with their self-described specialness?  Later we get:

...not one of my children considered publicly challenging today's leaders.  My generation was the last group with experience in doing that. I felt like a soldier trained for the wrong war, waiting for the wrong transport (1922 of 4423).

Ah yes, the Woodstock generation will ride again to save the day!

Of course someone who thought in these generalities would be a bit of a fool, and Sarah Dodge is more than a little bit of a fool.  Even though she is manuvering to save her own life, and gain more freedom for her extended family, she simply cannot keep her mouth shut.  She calls people, who she isn't supposed to know asking them for help, and foments disidence within the families grade schoolers at a time when it would be best to lay low.  If it were not for a variety of people helping her out, she wouldn't survive 5 minutes, and would accomplish nothing.  Her main value to the forces of enlightenment is symbolic -widow of the independent minded Judge - and asset based - the Judge left her some key, useful assets that they need.

The story combines an odd mix, of  cold war spy novel (with Minnesota the stand in for the East Germans), and end of life family health care paranoia.  If you took a  dystopian YA novels, and aged the self-involved teenaged protagonists by 55 years, you would get something of the feel of the novel.  Sallie is not as well behaved as the youngsters in a YA novel.  She complains, she resists direction from people who actually know what they are doing, she constantly wants to change the plans to suit her preferences.  She is supposed to be undercover, yet she is constnantly writing a journal.  There was a lot of work put into making this dystopian have a feel of reality, and it is very much a dystopia. Unfortunately, we have to share it with Sallie.

Did I like it?  Well I didn't dislike it, or maybe it would be more honest to say that I only disliked it a little bit, but wanted to like it more.  There is a fair amount of health care activity in this drama, and that is not an area I get real excited about.  The John LeCarre style spy novel would be more interesting, but Sarah Dodge is an inept spy.  The length of the family backstory is odd.  Odder is that for the most part, the final resolution of the different strands of the family drama take place "off screen".  At times it was an interesting story, but it was not a great story.  Although not consistently maintained, there are the elements of paranoia, so wonderful in a dystopian novel.For a first novel, it was a worthy effort, but truthfully, her second novel looks like it might be the better read.

O.K. we have our descriptive ratings.  Descriptive as in not qualitative.  One to 7 with 7 being highest.  Realsim and readability.

Realism is strateforward.  It is a realistic novel with enough science fiction speculation mostly medical advances), and with a society enough changed from our current one to deduct points.  In the middle at 4.

Readabilty is trickier.  The author rights reasonably well, and their is very little in the way of heavy symbolism.  We do get the sacrificial gay-hero that we discussed earlier in Desperate Times (Gay heroes are not allowed to live in PA novels). But I tend to view that as a rather light form of PC (politically correct) thinking taking a strange (a little twisted in my view) form.  The real deduct on readability is the extended family backstory, and the rambling philosiphiesing throughout the novel.  Readabilty is not merit driven.  Kant might force me to invent the "O" score.   I feel safe in saying it is somewhere between a 3 and 4, and will stay with the 3.