Etiquette for an Apocalypse: A Review

Anne Mendel's Etiquette for an Apocalypse is a post apocalyptic tale set in Portland Oregon where a small remnant of people are just starting to pick up the pieces from a two-stroke environmental crises, water shortages followed by the Yellowstone Caldera blowup blotting out the skies, has pancaked civilization.   Just as it is starting to look a little stable, a serial killer shows up. 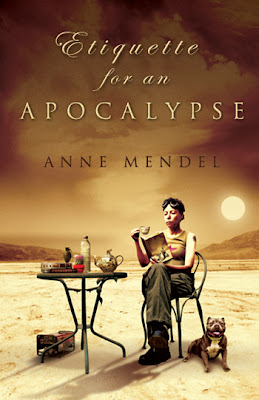 Anne Mendel grew up in Arkansas and now lives in Portland.  She did actually go to a charm school, although the authoress does not state if she successfully completed the course of work, just that she "attended."  On the blog portion of her website, she does list weekly tips to the neophyte, so some of her apocalyptic concerns are genuine.

The novel starts of with a Sara Silverman quote.  Quoting Sarah Silver makes me a bit nervous.  While I would be the first to say that Ms. Silverman is a very pretty young lady, that would be about all I could say in the way of kindness.  So I will let someone else summarize:

Yes, Silverman is quite a polarizing figure...a woman whose "comedy may seem offensive to Jews, African-Americans, Latinos, gay people, you name it, but that's because she's in persona as someone who is clueless, uninformed but certain in her beliefs."

But I am guessing that the Silverman quote is there to signal that this is a hip book with a secular-Jewish world view, and more than a bit of tongue in cheek to it.

It starts with our mother-heroine, Sophie Cohen,  mad a the world.  She is in post-apocalyptic Portland, Oregon after a variety of water wars, Yellowstone park caldera blasts, earthquakes, etcetera knock the world to peaces.  The apocalypse is severe, and as far as the people in Portland know, there is not a whole lot left standing anywhere else in the country, or possibly the world.

The story is just barely post-apocalyptic.  It is the year 2023, and the first stage of the collapse (previously mentioned water wars) was six years ago, and the Yellowstone eruption is three years past.  The die off is still going on.  People pile up the bodies outside the hospital where her husband works as a Doctor.  But the accumulating piles are getting smaller, and there is less rampaging and mayhem.

Although it is revealed slowly, Sophie has gathered together some surviving remnants of her parents coop apartment building had are busy in their own tiny village way, trying to go about getting enough to feed everyone.  There is a bit of entrepreneurial spirit going on with various residents coming up with ways to earn food, and trade items in the little market place that Sarah has set up in the coops parking lot.  One of the big sellers is the painkillers and antibiotics that her mad genius brother cooks up in his laboratory.

Sarah's husband is a doctor and works at the local hospital in exchange for an allotment of bread.  He discovers the bodies of young women with their hearts cut out in the body dump, and is concerned that there is a serial killer on the loose.  Since there is no police to speak of,  and being a naturally kind hearted doctor type, he drags Sarah into an amateur investigation of the goings on.

The tale spins out of control, in an interesting sort of way, from there.  There are rendezvous with what gives me vague memories of Deviants Palace (from the eponymous novel).  A war breaks out, and there is fair amount of action.  It is fairly obvious that the author does not have a lot of background in military affairs - she possibly has played some first person shooter combat games with her children.   She uses that with a smidgen of common sense to guide the action.  Since this is a bit of a send up, not all the action is exactly plausible, although it can be fairly humorous at times.  In the end, I became glad for the Silverman quote signaling because her post apocalyptic send up is not actually much less realistic than a lot of novels that are trying to be dead serious.

For something that has a little bit of a parody to it, a lot of the good guys die, and there is frequent memories of her teenage son who had died in a cholera epidemic.  It has a very odd sense of simultaneous sadness with humor.

In Sophia's coop, they don't have much in the way of weapons.  They really on some local toughs, because....they have no choice.  They are not survivalist/preppers.  What guns they have, they have no ammunition for.  Later, before going into a tight situation, someone hands her a gun:

What am I going to say? I don't believe in guns?  I didn't used to believe in eating red meat, and now I would gladly eat a sixteen ounce steak tartare (p190).

Did I enjoy the book.  Yes, I did.  At times my neck got a little stiff from the tennis-match back and forth between serious situations, and humorous silliness.   Sophie is starving through much of the book, so she is constantly relating situations to food.  I am a supposed to laugh at her starvation?  As I said it is a bit of a conflict, and it actually gets to be more problematic as the action heats up.  But in the end, Sophia and her family are likable people, and you do want to root for them.  Some portions of the book, mostly early on, even qualify as a page turners.  There is some adult content, but while being relatively frank in its discussion of urban-adult themes, I didn't find it particularly offensive.  There is more use of foul language than is probably necessary.  In net, it has a very strong start, and a muddled but entertaining conclusion.

For our descriptive (not qualitative) ratings: realism and readability.  Ratings go 1 to 7 with seven being the high end of the scale.

Realism?  Well there is a bit of a parody to the entire affair.  The real problem is that the parody is actually not less realistic than many of the serious novels in the genre.  It actually does discuss a lot of issues that would be relevant to a societal collapse.  Particularly early on, it is one of the better urban collapse scenarios available.  At the risk of insulting the author's intent at parody, I will say that it is at the mid-point and call it a 4.

Readability is easy, as in it is an easy read.  It is pretty much a straight tale interlaced with the "ironic" tone so common to much of today's entertainment, that nobody will be confused by it.  As I noted, it is even a page turner at points.  I will say that it is a 6.
Posted by russell1200 at 5:00 AM

Always being hungry or at least concerned about food is a probable outcome to whatever happens in our future.

I'll grab a copy once it becomes cheap.

Yes, the male writers talk about starving but the women seem to feel it.


The book starts off with her daughter coming home with a mangy little kitten and the mother trying to think of a way to convince her to turn it into a meal. And the author never actually tells the reader that this is done for comedic value. She assumes you are smart enough to figure it out for yourself.