John S. Wilson's Joshua is an apocalypse-in-progress that is starts in area of Nashville, Tennessee, after an economic collapse causes a relatively quick breakdown within the United States.  A sample (first 5 chapters) of the novel can be found here. 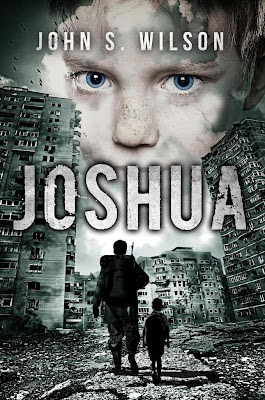 John S. Wilson, as self-described (source) has been a truck driver, warehouseman, security guard, air marshaller, insurance salesman, real estate agent, bottle inspector, assembly line worker, forklift operator, and stock boy.  He has been blogging for about a decade with his original site over on the old tripod platform, and at least the front end of the novel was  published online.  He eventually decided to self-publish it in an e-format.  He gave free copies to his blog viewers when he took it off line.  So that I don't give the wrong impression from the start, I will go ahead and say that the author showed a lot of writing disciplined and avoided the usual flaws that novels originating in this format tend to possess.
Our story starts with an immediate encounter between "the man" (about 43 years old and the primary narrative focus of the story, who is looking after Joshua (about 7 years old), and an unknown group of men with rifles.  They are taken captive, and we get to the heart of the story in a narrative flashback.

The Man, as he is referred to, is living just outside of  Nashville, Tennessee, working as some sort of EMS (Emergency Medical Service) technician when the sinking boat known as the U.S. economy crashes upon the rocky shoals of insolvency.  The last government shipments of free food make it to their destination, and are seen no more.  The riots start, and it all begins to unwind. People with somewhere to go, if possible further out from the cities, go there.  The man, has waited a little to long, heads toward his family in Lexington, Kentucky.  He notes early on, that it is Friday, September 13th, so the year should  be either be 2013 or 2019.  Quickly forced to foot, he walks the (center city to cc) 213 miles.  At the point where he is half the way home, and he realizes from what he is seeing, that the old world is never coming back.  Without going into details, as the book continues, he will be doing a lot more traveling than he originally anticipated.

As this is a traveling book, much of the story is somewhat episodic.  You have a variety of mixed one-off encounters, of greatly varying lengths.  Although the encounters often are very similar to the mix you see in the survivalist-apocalypse-in-progress sub-genre, the author brings a much more thoughtful process to the endeavor.  He does have some of Rawles' religious moralizing, but intentionally mixes in a variety of scenarios which show both the advantages, and limitations of that approach.  He also avoids the trap of having the "Christians" all being of the saintly sort.  Although "the man" does some praying and is obviously a devote person, the author keeps at a personal level which I think will make it a bit more accessible to more people. The author, having lived a little in the real world, has a number of rather nasty villains, but they come in a variety of sizes and shapes.  The villains are not simple zombie stand-ins.  He also avoids that latest trend, the super powered suicidal dog packs that live to soak up bullets.

There is a little bit of the governmental stock round up of citizens early on in the novel.  This scene has become almost a matter of faith in some post-apocalyptic circles, so there is not too much point in complaining.  Religion is religion.  If you look at the numbers involved (that old logistical problem) it is highly unlikely the government is going to be forcing many people into camps.  More likely they are going to be places for the connected and well off, and they will be working to keep people out.  A novelistic idea that started off as either voluntary and limited, or partial, is becoming forced and universal.  Since in our novel here, a lot of the action is around the State Capital, Lexington, and it is possible that it is a State initiative, we can let it pass.  Someday, I'll have to do the number crunching (I have already done a little of it in an early post: look at the oil reserve draw down rate) and show just how little supply the military can rely on compared to the task at hand in a homeland crises.

One wise decision that the author makes is to avoid getting into over involved discussions of how it all fell apart.  The main character knows the government was having problems paying its bill, that there was hyperinflation and latter a banking collapse, but it is all rather sketchy in his mind.   This keeps the background to the story mercifully short.
The novel does end a little bit on the cosy side, but that is a wise move for  a first time novelist.  The cosy ending is by far the easiest to satisfyingly pull off with this type of novel.

Finally, there is the obvious parallel between this novel and no the man-son story in McCarty's The Road, but not to the point of being repetitive.  This world is not so nearly gone as McCarty's which allows for a greater variety of encounters.

Did I enjoy the novel?  Yes I did.  I was glad I finished it as quickly as I did because it will allow me to have this round of reviews end on a positive note.  Although the use of "the man" to refer to the main character throughout the novel is a bit of a mistake, and tends to make the story a little less personal, the man is generally a good person, and will generally try to help people if he can.  That he has some tough learning lessons as the story goes on is of course one of the themes that makes these apocalypse-in-progress novels so interesting.    That being said, it is not a christian warm and comfy sing along.  There are adult discussions, and most would view it as inappropriate for a YA audience.

For our descriptive (not qualitative) categorizations, Realism and Readability: 1 to 7 with 7 being high.

Realism, I used to call grittiness.  It is gritty.  It is mostly a day-to-day struggle to find food, and much of the time they are half starving.  There is an appropriate mix of good people, evil people, and a number of people in-between.  Fortunately for our duo, they run into them in mostly the correct order or it would have been a shorter book.  There are a few survival hints dropped along the way, but it is not a how-to manual.  It maxs out at 7.

Readability is not intended to as a ranking of its literary qualities, but literally how painless, fast, and easy of a read is it.  The novel is very close to a page turner through all but its earliest portions.  It is a straightforward telling, and what philosophical discussions as occur are fairly straightforward.  The answers might not be easy, but the dilemmas are clear.  With a slight deduct for the clumsy start, it is a 6.
Update (12/2/2012) The author sent me the following note:

The book has been reformatted and edited, Also, although there are no big changes several scenes have been extended too.

Since I have already given this novel a strong recommendation, the additional editing would likely only extend that recommendation.
Posted by russell1200 at 5:00 AM

A few months ago, I read the free chapters and decided not to get the book. But I'm going to put it back on my list after reading your review.

GK: Unfortunately the first chapters are the ones most consider the weakest. Starting in the middle of an adventure to get the readers juices going, and than flashing back to earlier information is a very workable tactic. But the starting incident is too drawn out, and does not actually have enough drama to make for a good hook.

The book is much stronger once we get back to the start of the trouble.