Jane Gallion's Biker is a Mad Max style post-apocalyptic novel centering (roughly) around the remnants of California and Nevada.  Published in 1969, it is presumably reflecting a devastated  "future" 1970s.  There are some mixed signals as to the intent of novel.  The violence of some of  the early sex scenes argues for a pornographic intent..  But as with  The Colony, that we reviewed earlier, the signals are mixed and by the end of the novel it has zoomed off into other (still strange) directions.  Pornographers have often tried to expand outside of their base audience, and this is likely one such attempt. 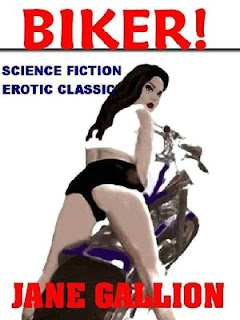 Biker was Jane Gallion's first novel.  Born in 1938, she grew up in La Sierra, CA, as a  Seventh Day Adventist.  As she notes in a letter contained within   Harriet Emerson' s "Making Our Own Way: Rural West Virginia Women Artists" (1990) the La Sierra of the 1940s had:

...two grocery stores, a hardware store, a feed store and a blacksmith shop. You may object that this isn't the sort of town CA is supposed to contain, but things were markedly different in the '40s. Outside of the businesses I mentioned, all there was to La Sierra, CA, was alfalfa fields and an Army base.

It was a very different world.  By the time she wrote Biker she was thirty and as she notes, had a lap kid, and two yard kids, had been divorced three times, and no obvious job skills.  She was also well known in the Los Angelos Science Fiction fan scene, and was somewhere in this time period a close friend of Kurt Vonogut.  Oh yes, and it was the peak of the "60s" culture.

Although her early rural experiences were probably not of much help in Los Angerlos, soon after writing Biker she moved to West Virginia.

I came to West Virginia in 1973, at the crest of the back-to-the-land movement. From the middle of Hollywood, CA, I arrived in Glenville ahead of most of the wave of BTTL [back to the land] freaks. Hot on our heels came a million and a half scruffy, ignorant hippies without the least idea how to cope. I, however, was raised by displaced Okies, who had migrated to CA just after the "dust bowl" era. I knew all about scrubbing diapers on a rub-board, building fires, mulching the pot plants, and foraging. I'd done my homework before I arrived in WV, to the unending scorn of all the other hippies, who thought planning ahead was buying two packages of Zig Zags [brand of rolling paper]. I even planted and transplanted my pot by the Moon, and pruned it ditto, with the result that my plants were nine feet tall in August, while the hippies up-holler, who thought I was a superstitious, if hyper-rational asshole, had scraggly plants two feet tall a body could hardly catch a buzz off.

Different types of survival for different times.  Who are we to judge? LOL

In  reading the entire piece you can see she lived a pretty rough life, abusive husbands (boyfriends?), running out of money, etc.  She is not polished.  She does have a rather frank honesty to her.  Much of what she was writing was smut and she knew it. She died in a hospice in Texas of cancer in 2003.  In the end the science fiction crowd paid more attention to her passing (she was a fan,  and published one known short story) then the industry she was best known for: not too surprising there.  Some additional, very late, work of hers can be found here.

The novel itself  has a a forward by the author.  She notes that she had run the novel by a Baron (leader) of one percenter biker gangs to check that it had an authentic feel for the "scooter trash culture."  It is fairly obvious that she knew this crowd and that she did not have to work to gain access:  a very rough crowd to be familiar with.

The novel is apparently famous for its opening rape scene.  The main character is Feather.  She is a the type of woman who hangs around with hard core biker gangs, gets used as a prostitute , etc.   Her role in a post apocalyptic world is less voluntary although Feather is not an innocent actor here.

The general storyline is that Feather has decided to make a run for it.  She is a drug addict (the author seems to get these parts down pretty well), and she gets abused by the various biker types who are terrorizing the remnants of this portion of the U.S. West.  Feather herself is more than willing to kill people not only in self-defense, but in what might be termed peremptory self-defense.

The books ulterior purpose seems to be to show the progression of Feather, from a living in the moment biker chick with vague aspirations of finding a better life, to a more emotionally hardened  person with a more realistic sense of what life is all about.  Most people would see Feather, particularly early on in the story, as being something of a drug induced idiot. But Gallion does make a reasonable effort to show that for her, the drugs and live for the moment life is all that she reasonably has open to her.  The people she runs into are violent and abusive, and she has nowhere realistically to go.  At least if she runs with the crowd, she gets drugs and action in between the abuse.

The book concludes with Feather being taken in by an open-love commune of sorts.  It is the unfolding events here which brings out the ultimate point to previous violent activities.  Civil society, may dress up the language and put on a facade, but it is still about power- still about who is in control.  If you don't play along, you are going to get toss out of the house, get foreclosed on, live under a bridge, etcetera.  The main difference between the two worlds is that the mainstream lives in a nicer house and the surroundings are more comfortable.  In the end love is a lie, even if it is a necessary lie.

It would be a reach to say the novel is a masterwork.  It gets dressed up as a sort of proto-feminist work which is a bit of a reach.  Ms. Gallion notes in the 2001 re-release forward that contemporary fiction often has sexual scenes of a similarly graphic nature.  Maybe at the edges, but again it is a bit of  a reach.

To my mind what Biker does well is portray a bleak world view of a certain type realistically from the point of view of a participant.  Ms. Gallian lived close enough to that life that she did not need to fake it.  It is a zero sum world with a society slightly more advanced than maggots on a waste pile.  That Ms. Gallian is able to draw analogies to mainstream culture is telling, and probably not as unique today as it was at the time.

Did I like the book?  Like is probably the wrong word to use.  It was interesting at times: very difficult to predict as to where it was going.  It is relatively rare to see what life would be like in one of the fiction post-apocalyptic biker gangs.  If such an oddity were to occur, Ms. Gallion's take on it is probably a much closer approximation to their mind set than any other renditions I have seen.  To be honest, Ms. Gallions odd life was more interesting reading about than the novel.
As a person, Ms. Gallion must have been h... on wheels, because people were remembering her from fandom days in L.A. for a long time.  You have people in the Sci-Fi crowd remising about her 33 years after the fact.  She was noticed.

After the shooting of Robert Kennedy in 1968, L.A. fan Jane Gallion found out that her quiet next-door neighbor in Pasadena had been Sirhan Sirhan [source: Ellern 23Feb01 email] (from here - near top)

For our descriptive (not qualitative) ratings, realism and readability:  1 to 7 with 7 being high.
Realism is a mixed bag.  Her portrayal of the violence and desires of the "scooter trash culture" is likely dead on.  What is a little fuzzy is where the bikers get there food, water and fuel.  There is obviously a certain amount of economic activity going on even in the wastelands, but Feather (probably somewhat realistically) does not exist at that level.  She is fixated on hitting the road, and finding her next high.  Food is of a secondary concern.  But even so, there is a bit of  a fanciful ending to the novel, so I wouldn't push the realism to far.  I will say that it is an above average 5.

So if the book is a reasonable approximation of biker gangs' actions in a EOTWAWKI world, what would be the proper action taken by a tribe/group/etc who spots a biker gang approaching their den? Tribute like the Mau Mau?

Thinking about revising my dislikes about Valhalla, the actions of the various characters and the whole tribute paying to the Mau Mau.

Our DNA screams for survival. People will be people. I really can't blame them.

Tribute has been a pretty consistent strategy for a really long time.

Because we are from a country that has been virtually unconquerable for a long time, and because of the experience with Hitler before WW2, we tend to associate tribute with the failed attempts at apeasement.

Tribute is a reasonable strategy, particularly when it is less expensive (for both parties) than the ensuing fighting. Many Empires were not much more than codefied tribute systems.

If you are strong enough to inflict heavy casualties on the bikers, than some form of negotiation might be worthwhile. But they would make for some very dangerous neighbors. So long as it is a scenario where they still have a little fuel, there big advantage, when combined with radios, is that if they have 500 members scattered about scrounging resources, they can reinforce a threatened/opportunity area quickly. The motorcycles themselves strike me as rather fragile combat vehicles.

Stratigizing in a vacume, but it seems that the best bet would be to retreat into areas where they can only follow on foot. Then they are limited to their walk-in fire power, and loose their ability for a fast retreat.