The Eagle has Crashed: A Review

Ted Lacksonen's The Eagle Has Crashed is an apocalypse-in-progress set primarily in the area of Columbus, Ohio and with a major secondary focus on the personal interactions of the White House and major congressional leaders.  The collapse in question is a politically driven economic collapse. 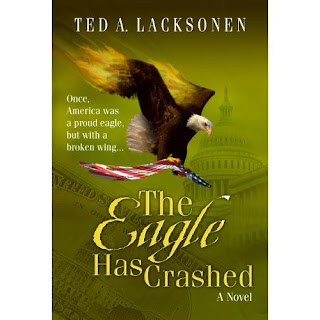 Ted Lacksonen, of Gambier Ohio, if I understand his biography,  worked initially in  mechanical contracting, and sheet metal fabricating, before moving on to work in an international law firm.  He highlights an interest in Polawnics—the interrelated areas of Politics, Law, and Economics.  His inclinations toward Libertarianism and Austrian School economics seem to cross intersect with  the usual problem for people of his age (he appears to be around 40), getting traction in the workplace.


In the front end acknowledgements, the novel he gives his thanks to Jay Corrigan, Associate Professor of Economics at Kenyan College, and Economist, Bob Murphy (presumably this guy).  The reader should be warned, while it is a novel, a fairly large portion of it is dry economic dissertation -mostly of the Austrian School persuasion.  Austrian school economics tends to take a few polemic arguments and beat them to dust.  They tend to sound brilliant in isolation, but because they lack any real method of verification, and often make assumption for which it is very hard to find any basis in fact.  As an example,  I think a lot of people would agree with the idea that economies tend to go through cycles of leveraging (debt), and when the debt collapses you get a recession.  What is unclear, based on their approach, is the timing of these cycles, and what the exact effect of the remedies they proscribe will have.  They assume that once the debt is cleared out that the economy will pick back up.  But they are also assuming, as most modern economists do, that economies will be in position to pick back up the pieces, or that there will be the continuing stream of natural resources, fuel in particular, to draw upon.

The novel has an overtly political framework. It combines relatively polite, economic rants with the sophomoric depiction of the White House, and congressional politics.  The sitting president is  the second coming of Bill Clinton.  The authors own political views, "a pox on both your houses- but more so on the Democrats" is fine as it goes, but does not make for an interesting novel.  The personalized assault on the fictional president is an amazing waste of time.

The economics are a bit simplistic.  It talks a lot about how we should have been putting money into foreign assets during the 2000s to pay for the boomers retirement, but never seems to be much interested in why we were not in a position to be saving much money in the first place.  Mostly what we get is a simplistic rant about cutting spending to match income. I am all for that, but a prescription is not a cause.  That the Western economies flattened out after the Arab Oil embargo, and never really recovered until they started borrowing their way to prosperity never seems to register.

The novel does a better job with showing what a moderately fast economic collapse would look like from an everyman's point of view. With the author being based out of Ohio, he has union wage and work demands being a major cause of the collapse.  The union wages take the place of high oil prices in a peak-oil novel.  It is telling however, that one of the author's few detailed examples of the collapse in retail sales, is the deflationary pricing in German luxury automobiles.  That these automobiles never should have been bought by the author's own advise (remember we are supposed to be investing overseas) does not register.
About half-way through the book, the United States begins to fall apart at the seems.  Texas starts the ball rolling with a secesionary movement, and it slowly goes downhill from there.  Although a fair amount of time is spent with the various political and military jockeying that involves Texas, little of it is very interesting.  The author would have been better of sticking with Ohio.  As time goes on we get even less plausible activities involving foreign interventions that look a lot like a militia-novel.  The primary difference between this novel and your standard militia-fair is that not all of the foreign interactions are viewed as hostile.

The strong point of the novel is the activities of the various lower level people in Ohio.  It is at this level that the author is the most balanced in his politics.  People on both sides of the issue are shown to have legitimate concerns.  He does an excellent job of showing that you don't need the classic exodus from the big cities, with the penultimate fight at the barriers, to have a scary collapse.  Laid off policemen can be very scary.  Oddly enough, although he indicates a lot of problems with rural bandits, he gives us an extended introduction to a rural homestead-style  prepper, and then  does very little with them during the novel.

Did I enjoy the novel?  Some of it.  What you have is a nugget of some very interesting, well developed local characters swamped under some pretty fanciful geopolitics, and very dry economics.   The novel is trying to do too much.  It is trying to be an economics text, a political commentary-warning, and a realistic personal portrayal of an economic collapse.  It would have been far more effective in the first two endeavors by cutting them to the bone, and extending the personalized portion of the novel: the portion that the author actually does very well.  I think most people who don't share the authors political - economic leanings will find it tedious overall.  It is not an effective vehicle of persuasion.
For our descriptive ratings: one to seven with seven being high.
Realism?  Realism, which I used to call grittiness, is the portrayal at the everyman day to day level.  Is it a plausible experience with the reader can see happening to them?  There are some extremely real parts of this novel, that are watered down, by the White House Politics, and economic speechifying.   The 7+ portions of the novel  have been watered down to a slightly above average 5.

Readability?  How challenging of a read is this novel.  There are a few interesting action scenes.  As in real life, they don't always come to a very clear, or at least successful, conclusion.  The frequent scene shifts kill any hope of it being a page turner.   The economic dissertations just drag the pacing down..down...down...  If you skipped over all the economic sections, it would probably be around a 5 and you would miss none of the narrative thread.  As it stands, I am going to say that it is a 3.
Posted by russell1200 at 5:00 AM

Far be it from me to complain, but you spend a fairly long post calling this thing a dog then give it a 5 of 7 on enjoyment?

the good parts must be damn good to get past all your negatives.

They are descriptive repeat descriptive ratings at the end. They are to give people an idea of what type of novel it is.

It is attempting to be a realistic portrayal of our real world, and sometimes succeeds, and it a bit of a difficult read for what is a non-literary work.

Do you have a best of list? If you could only have 5 SHTFish books, what would they be?

GK: Maybe 5 good ones I haven't read yet. LOL

Apocalypse-in-progress and Post-Apocalyptic even more so, actually fit across a number of sub-genre. There is the doomsday prepper SHTF books, the cautionary tales, the reset the world dystopians (or less common dystopians), the horror genre (with a number of classics).

Some of the better reads are likely in the horror genre. But does Steven King's really compare in a meaninful way with Lucifer's Hammer, which is more of a cautionary tale?

I have thought of being clearer in rating the relative merits of the books. But I am not there yet.