The War After Armageddon: A Review

Ralph Peters' The War After Armageddon is an dystopian near future novel with elements of an apocalypse-in-progress.  The major catastrophic elements are a doomed Islamic rebellions in Europe, and a major Christian - Muslim war in the Middle East with the heavy use of old school armored and mechanized units.  Nuclear bombs are used, including what looks like a false flag strike at Las Vegas. 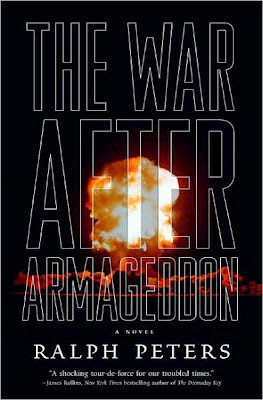 Ralph Peters is an retired Lieutenant Colonel in the U.S. Army.   Most of his service was in Germany in armored unites and in military intelligence.  He writes both fiction and public opinion essays, and appears frequently as a "talking head" on Fox News. He has written Civil War historical fiction under the name Owen Perry.

My first Ralph Peter's novel was 1989's Red Army, a warning novel that indicated the presumptions of the then current, various military thrillers, such as Harold Coyle's Team Yankee. that always had the NATO forces winning over the rigid, straight jacket mentality Soviets, were very misleading.  Red Army might have been titled Red Victory.  It was correct in believing that the presumed superiority of U.S. doctrine would lead to victory over greater Soviet numbers was more wishful in its thinking than likely.  That is came out just before the fall of the Berlin wall is an unfortunate bit of timing for a very interesting book; A bit of timing however that should have forewarned the author as to the merits of his prognosticating abilities.

Since that time Mr. Peters seems to have descended into that madness of pundocracy that inhabits the talking heads of the various cable news shows.  He takes bold positions, and for someone who had worked in the intelligence community has a lot of black and white answers to our problems:  many of the solutions involving assassinating people we think are dangerous to us: journalist, Julian Assange, etcetera.  To a distant outsider, he seems to have fallen into the fairly normal pundit problem of needing to have sound-bite opinions on too many subjects.  It doesn't matter which side of the right-left divide you work on- you are going to wind up looking crazy, foolish, or both before it is all over.  Of course, for the ex-military types,  if money and ego stroking are your primary motivations, you can laugh all the way to the bank in between striking Pattonesque posses in front of the mirror.

The author's stated purpose in writing The War After the Apocalypse (from the Author's notes) is to "engage" several areas of enduring concern:  the iniquity of fanaticism in the name of any faith, the danger of nuclear proliferation among parties not dependably subject to deterrence, and our militarise reliance on electronics that may prove all too fragile in a major war.

These are rather disparate threads to try and bring together into a novel.  They are brought together:  but not successfully.  What you wind up with is an excuse to get some 1980s style Red Army action going on in the Middle East without all those pesky technical advances that have occurred since the 1973 Yom Kippur War left Sagger missile guidance wires draped all over the Israeli tanks.

If you are thinking, oh no, not another Arab - Israeli rehash, don't worry, it is far more discombobulated than that.  You see we have the Christian Fanatical forces of the United States Army and Air Force against the new Muslim Caliph of Damascus-Baghdad going at it.

Well they go at it occasionally.  Mostly we have a lot of backstabbing intrigue going within the U.S. officer corp with the Christian fundamentalists going after the bold, brave, incisive, only-man-who-can-win, "Flintlock" Harris.  To all this intrigue is added enough of the staff work as to make it truly boring.

The book is a mess.  You wouldn't think that it would be possible to resurrect the Nazi-like Germans with cattle cars, bring the Caliphate of Baghdad into the 21st century, and stage a Christian fundamentalist coop within the United States, and make it boring - but you can.  Snippets of action, not always very convincing, with just a intrigue and espionage.   Intrigue and espionage that is of the relative sophistication of fourth graders passing notes in class, and don't do much for a book that is supposed to be a "warning" of the plausible, not the slightly possible.  Certainly elements of what are happening in the novel are worrisome.  It's not an accident that Mr. Peters places some of the more extreme elements of his Christian fanaticism within the U.S. Air Force.  But the level of plotting and double dealing here is just absurd.  The bad guys schemes make the Japanese battle plan for (or Leyette Gulf for that matter) look like masterworks of simplicity by comparison.

Well, obviously I didn't like the novel.  As a piece of pundocracy that it cloaks itself in speculative fiction, I find it reprehensible.  Where I have seen positive reviews, they site the various themes (terror nukes, middle east mid-scale nuclear war, religious fanaticism) and act as if these themes are treated in some coherent fashion.   Unfortunately, saying that you are going to write a book that illustrates important themes and ideas, and actually delivering on that statement are two very different matters.  It's like saying that the Spiderman comics delivers on the theme of student work-study balance, and then making it boring to boot.

For our descriptive metrics of Realism and Readability.  Rating 1 to 7 with 7 being high.

The novel has a facade of realism as it jets around from place to place, and scene to scene.  But it is an odd realism:  right from the start we have discussions about how the war is a long distance World War 2 style affair, and the use of technology is so ham-handed that it almost take the novel back to a lower technology level than his 1989 Red Army.  It is realism with no attachment to reality.   It does involve some concerns about logistics, and as I said, there are staff meetings.  Rating: one point below the average: 3.

Readability is poor.  I abandoned this book for a considerable period of time, before coming back to complete it.  As anyone who has gone through enough of my reviews can attest, I can plow through some pretty mind numbing stuff, so that should be a warning.  It is 370 pages (hard back edition) of rambling chaotic plotting.   It is confusing, and very slow moving at times.  At the risk of bringing in qualitative aspects into a descriptive rating, a near-abandoned book simply cannot be said to be "readable". It is a 2.
Posted by russell1200 at 5:00 AM

Thanks for the heads up. One of my friends is trying to get me to read this but I am resisting.

He also convinced me to read "The Last Centurion" which was a moderately good trashy read along these same lines.

I really think that these are just brave hopes that all of the money that we have poured into armaments will prove useful.

I have not read "The Last Centurian".

It is disappointing how many of these heavily hyped books are so seriously flawed- flawed even within the very limited range they are trying to reach.

There are a couple of "flawed" books I could almost recommend for a laugh as they mangle their way through cliches - not this one.