Lost Everything: A Review

Brian Francis Slattery's Lost Everything is a post-apocalyptic novel set  in a climate stressed, overheating, collapsed America of what appears to be the late 21st century: taking place primarily along the towns and cities of the wide, but previously shallow, Susquehanna River in Pennsylvania and Upstate New York.  It has been a very long collapses with global warming driven super storms piling into an economy ruined by resource depletion.  And of course, because we are what we are, we still  have enough rudimentary military equipment left to fight over the ashes. 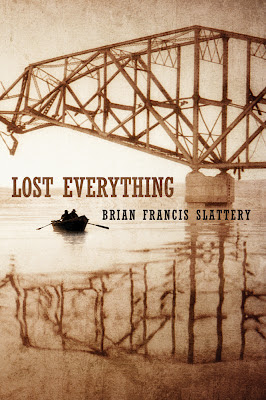 Brian Francis Slattery is an editor at the New Haven Review, writes a variety of short pieces on a variety of subjects including one (here as pdf) on the imagining future wars, and has published two previous novels.  His Spaceman Blues received a number of Best Novel (2008) nominations, and was the story of the last days of earth before being overcome by an alien attack.  His other novel, Liberation: Being the Adventures of the Slick Six After the Collapse of the United States of America was also a post-apocalyptic novel- although it appears to have been of a slightly more satirical bent than our novel here.  If Liberation had elements of satire, this novel has elements of the blues.

The novel has a bluesy, surrealistic moodiness.  It mixes a bit of the feel of Twain's Huck Finn, with Francis Ford Coppola's Apocalypse Now (video).   A father is heading to the tiny town of Whitney Point, NY to retrieve the son that he stashed away there for safe keeping.  The war, a confusing mess of low level violence is slowly marching its way north from Baltimore, and the penultimate meteorological storm is pushing down from the north.  Everyone is stuck between the two destructive forces.

The Susquehanna has always been a very wide, long river, and did interlock with the greater Upstate New York canal system of the Eire Canal era.  But it was not easily navigable by large boats, and Pennsylvania's incompetence building canals, meant that along its lower reaches, the towns grew up with the railroads, using the water for a variety of industrial purposes rather than as a means of transport.  But global warming has brought heat and monsoons, and the Susquehanna of our novel is now open to river boat traffic - even if it is disheveled, thrown together post-apocalyptic river boat traffic.

The area is a great setting for the slow economic strangle version of an apocalypse in progress. The satirical movie Slapshot from the 1970s captured its “splendor” and it has been a bumpy slide since than.. If you have read any of James Kunstler's rants about the slow collapse of the old New York economy, you are familiar with the area.  Although Kunstler is  near Albany, he is right next door in terms of socio-economics.   Once an absolute power house of small industrial towns and villages, these areas have  been sending their children elsewhere to work for some time.

Although Slattery's geographic descriptions are a bit jumbled, what he does give you is very well done:

At the start of his journey, our hero is in a van headed toward the river (p.45):


They curved onto a long ramp over the water, where the islands fell away, the valley opened out, and the river swelled wide. It was cutting the hill in half, tearing the wound wide.  The ridge was ragged with the river's assault , fell to the shore at steep angles.  Covered in foliage, leaning trees. Rocks shaking loose from the bleeding wall.  The highway, the giant Clarks Ferry Bridge, a toy amid all this violence.  Once it had shot across the gap over the water, the river unperturbed around its monumental pilings. It would have pulled it all down in time. But the war got to it first, took down the bridge's middle third.  The western end then fell all on its own, leaving the eastern end a jagged pier, its length ending in crumbling concrete, bubbled asphalt.  Metal beams jutting below. The rubble from the explosion was gone. The river had made its bed with it, and the birds had returned already to the bridge's underside, built nests in the blackened steel . Their cries bouncing off the water's sleek surface.  All the while, the river dug deeper.  Bringing the mountain to its knees.

Life is pretty minimal.  A grown woman can remember back to her boyfriend's car, and going out on a date of sorts, using his next to last tank of gas.

If there is an elite jet-set left somewhere, they are not found along the Susquehanna.  In what is presumably some sort of attempt at PC-thinking, the author has women in most of the stronger authoritative roles.  Within the dystopian setting, this has the (presumably) unintended effect of making women seem particularly culpable and blameworthy for the sad state of the world: their the ones in charge after all. There is certainly not a whole lot of the civilizing effects of woman visible, which may go some ways toward explaining why everyone is behaving so poorly.

The story combines an odd variety of narrative tracks. There is an overall narrator, who has investigated the occurrences within the novel, but was not present during the actual activities. Which combines oddly with the standard third person narrative, and and a variety of individuals retrospective  histories. It tends to make for a bit of a wobbly unfocused mess.

Much like Mr. Kunstler’s happier collapse in north of Albany in upstate New York, this novel features a number of musical interludes. The musical interludes were rather dull in Mr. Kunstler’s work, and if they are less dull hear, it is only because you don’t have to suffer through as much of it. The intersection of musical performance and fiction is tricky. The only novel I have personally read that pulled it off is Lewis Shiner’s Glimpses (available from author here as pdf ) and it is noteworthy in its uniqueness.

There is some interesting looks into what it would be like to grow up in a collapsing society, and the variety of usually negative experiences that would come from this setting. These are not a representations of the well adjusted, productive folks. Primarily, because within the setting it does not appear to be possible to be well adjusted and productive.

It nets out as a hazy tale of redemption that would almost seems to be taking place along some slow moving river in the 19th century Southern United States.

Given the somewhat scattershot ending, I am guessing that the author might be aiming toward a message similar to that of Marcus Aurelius (from Meditations):

“Accept the things to which fate binds you, and love the people with whom fate brings you together, but do so with all your heart.”


Unfortunately, given the confusing narrative structure, and over-the-top magical realism, I think the story is coming closer to another of Mr. Aurelius’s quotes –also from Meditations:

“The object of life is not to be on the side of the majority, but to escape finding oneself in the ranks of the insane.”

Like the author, I also lived in the area of the story for a time.  So I had a natural interest in seeing how it was portrayed.  I also don't necessarily mind that odd blend of reality and fiction referred to as magical realism.   One suspects that simply by being confusing, it will gain itself some positive reviews.  One wouldn't want to admit that one didn't get the point of the whole story; to admit that you were confused.  But to my mind it is not so much confusing, as unfocused, with poorly sequenced vignettes trying to tell too much story rather than telling one story well.  So while I wouldn't say that I actively disliked the story, I also wouldn't go out of my way to recommend it.  Of course if you like the idea of magical realism meets the apocalypse, and you go into the tale knowing that the hard driving plot line is going to end up swamped in a dikeside puddle, you will enjoy some of the language along the way.

Well we will wrap up here quickly:  Realism and readability: 1 to 7 with 7 being high.  These are intended merely to describe, not as a qualitative assessment.

Realism:  There are ghosts.  They are real.  It is magical realism of the fuzziest sort.  In addition the author's story telling style seems to more in sync with being on a Mississippi River boat, than  post-modern collapsed environs.  Both "The War" and "The Storm" are mindless phenomena beyond the control of humans.  It is a one.

Readability:  It is literary.  You travel with the characters through most of the novel, without them revealing to you what they obviously have known all along.  There are fairly obvious symbolic encounters, events, portents, etcetera whose meanings are obscure at best.  It all adds to the atmosphere of the surreal, but it makes it a tougher read.  On the plus side the descriptive language is good, and the novel does move along reasonably well for such an introspective creature.  I will say that it is a literary 2.