Will Weaver’s Memory Boy is a young adult (YA) post apocalyptic novel set in , after a series of eruptions in the has created an ashen nightmare.   The book was written in 2001 (before the events of the 911 terrorist attacks) and the events are occurring in a future 2008.  The author very recently came out with a companion novel The Survivors: which Kirkus gave a (teaser alert) reasonable review. 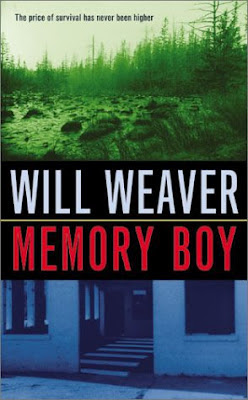 Will Weaver grew up in a small town in Minnesota on a dairy farm.  He taught at Bemidji State University for many years, and is now retired.  He writes both children's literature, and adult fiction.  His most recent work for adults was a memoir about hunting.  Much of his writing appears to revolve around rural and small town life.

To save my self some time I'll just give you the book blurb of what it is all about.

Ash is still falling from the sky two years after a series of globally devastating volcanic eruptions. Sunlight is as scarce as food, and cities are becoming increasingly violent as people loot and kill in order to maintain their existence. Sixteen-year-old Miles Newell knows that the only chance his family has of surviving is to escape from their Minneapolis suburban home to their cabin in the woods, As the Newells travel the highways on Miles' supreme invention, the Ali Princess, they have high hopes for safety and peace. But as they venture deeper into the wilderness, they begin to realize that it's not only city folk who have changed for the worse.

Actually, the story has a split time line.  Some of it is occurring just after Mount Rainier and company blew their tops, and the other portion is that of what is described above.  The split story line continues for about 3/4ths of the novel, before the back story catches up with the front end of the novel.  The shifts in time are well accomplished, and is a good way to get a story into the action segment without sacrificing too much background/character development.

There is the usual failure to adequately describe the surroundings that the family is traveling through.  Again, authors writing stories within their home setting make presumptions about the basic understanding of the landscape.  How far can they see off the road when they are traveling?  How frequent are elevation changes.  A lot of the area of travel, at least today, is a lot more cluttered than you would think from the story.  At least when I Google Streetview, or Bing Birdseye view, it appears that way.

Because this is a YA novel, the nastiness is going to be implied more than experienced.  But it is not ignored.  The response they get from people is suitably quirky.  They come to realize that the natives in the area they are traveling into don't view them as being much better than wandering homeless people pushing a shopping cart, so it is important to give a sense of destination, of belonging to a place.  They also learn to be careful of these locals.  Not all of them are dangerous, but everywhere they go, certain small groups have learned to take advantage of the weak.  It is not open warfare, but it is dangerous.

Along the way, there are a number of astute observations as to the mechanics of the collapse.  They come to realize that the large isolated suburban home that they had recently moved to was one of the least safe.  People assumed that the wealthy had resources and were hording the best food and supplies for themselves.  Too far apart to be self-supporting, and not really knowing their neighbors that well in any case (their is zero community organizing) these areas become the first target for the criminal and the desperate.

I did enjoy the story.  It is not particularly long, and it does have some of that teenage banter that reminds you of a sitcom at times.  But it is well thought out, and well written.

For our descriptive (versus qualitative) categorizations.  Rated 1 to 7 with 7 being high.

Realism:  More dangerously realistic than you might expect for the target audience.  I don't want to give away too much information, but a lot of their starting off assumptions wound up being seriously flawed, and very little of their planning survived unaltered.  It is not a militia brawl, but there is physical danger.  They make some mistakes, and pay for them.  But by virtue of being a relatively "safe" YA novel, some of the heat is lost. Call it a 6.

Readability is easy.  The use of language is easy and straightforward without being dull.  The story hangs on a bare bones structure that allows it to be a page-turner at times.  Again a 6.