Julie Myerson's Then is an apocalypse-in-progress told in the freezing cold wastelands that are left of a near future London.  At 9:22 in the morning a catastrophic (solar/celestial?) phenomena sweeps over London, and likely the rest of the world: first there is fire, and than there is ice:  lots of ice. 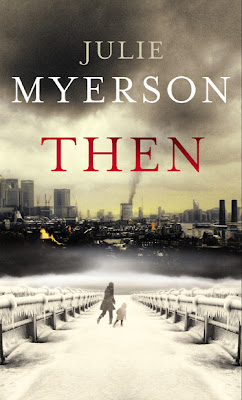 Julie Myerson has written both fiction and non-fictional works.  At least some of her non-fiction has centered around her family life, and in Great Britain she is a bit of a controversial figure.  Some of her anonymous writings, at a column for the Guardian, titled Living with Teenagers (review), had people comparing her family to the (non-anonymous) Osbourne Family- and then her writing became non-anonymous.  This story does not appear to be autobiographical in any particular way.

This story centers around an unnamed woman who is hiding out with a small group of survivors in an office building somewhere near the intersection of  Bishopsgate and Houndsditch in London England.

The group is not doing very well, and our main protagonist, an obviously attractive woman, has sever memory loss problems and not only cannot remember her distant past, but has difficulty remembering her immediate goings on.  She does not know her name, and has to be constantly reminded not only of her companions names, but sometimes takes them for strangers.

Obviously traumatized, the woman's story has an odd pattern to it as she struggles to slowly put the pieces together.  As she puts the pieces together, the story gets more disturbing, not less, and the past, present, and even to some degree that future get a little tangled together.  It is a tense and very disturbing book.  I have seen some comparisons to McCarty's The Road, but it also has some of the confusion and urban setting (but none of the humor) of the movie Twelve Monkeys, and  some of the spookiness of Sixth Sense.  With such severe memory loss, it is difficult to say what is real at times.

I won't go to far into the story.  I did enjoy it, but more as a psychological scare/horror story than as a rendition of the apocalypse.  It certainly deals with some of the issues of starvation, and fear, but there is a sort of ethereal spookiness that gives it a very different tone.  Apocalyptic narratives can work very well as non-supernatural horror;  Red Queen being another exceptional entry in this category.  If you are not too faint hearted,  it is an exceptional way to make yourself a little bit nervous.

To our descriptive ratings.  Realism and readability: 1 to 7 with 7 being the top of the scale.

The book is intended to be a bit surreal and leave you guessing.  As with all good horror writing, it draws you into the characters and brings you into the moment.  However, it is obvious that a lot of what is going on is backward looking.  Much of the narrative is not physically real, but a case of memory, and an unreliable narrator.  The mystery of wondering what has happened is intense.  You could put it almost anywhere on the scale,  but some of the very terrifying situations that arise have me placing realism at the mid-point: 4.

Readability is tough.  Because much of the novel is psychological - Ms. Myerson is messing with your head - it is not exactly an easy read. She does not use quotations marks so as to make it unclear as to when someone is saying or thinking something at times.  Balancing this is its manageable length, and straightforward prose.  The authoress gets to her point without too much wordiness:  a literary 3.

Actually, sounds like my kind of book. :) I love unreliable narrators! Love the cover, too. I think I'll definitely check out this one. Thanks a lot!

G: I did enjoy it. It just fall into an odd catagory - psychological horror mixed with realistic horror.