Man in the Holoscene: A Review

Max Frisch's (translation from German by Geoffrey Skelton) Man in the Holocene is a novella (111 pages) telling the story of personal survival of an aging retiree who has wandered off from his retirement home into the Swiss Alps. 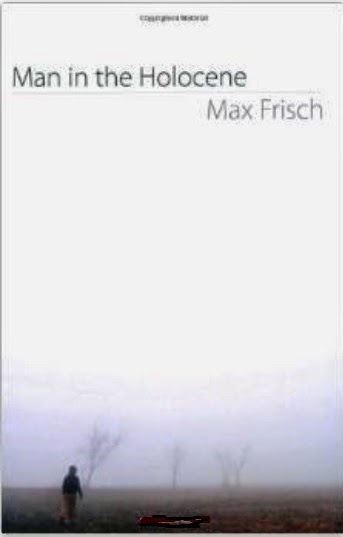 Max Frisch (1911-1991) is a famous Swiss playwright  and author.  Around the time of this writing this novella (1979),  the author was getting older and setting up a foundation to look after his affairs on his death.  He was splitting time between New York City, and his villa in Berzona, Switzerland.  Although the village the story takes place in is unnamed,  it does take place in the Canton of Ticini, where Berzona is located.  All of which indicates that there is some autobiographical speculation to the old man's plight.  The story is generally considered to be one of the masterpieces of the 20th century.

The story is fairly simple.  A retired business man is alone in his cottage in the Swiss Mountains.  Not being originally from the area, he is somewhat isolated and alone.  There is a continuous, huge downpour, that threatens to cause rock and mud slides that he fears will bury the village or at least block the way out.  Eventually the old man decides to walk over the mountains through a pass that will take him to a more settled area.

The old man unfortunately is slowly loosing his memory.  He has taken to writing down all sorts of information on scraps of paper to keep from forgetting things.  As the story progresses, old man considers lost empires, and long vanished species, as he is slowly loosing himself.  "We die alone and forgotten is a concept that the novel ponders", although it does not come to the pat nihilistic conclusion one would suspect from the story outline.

I did like the little story.  There is enough depth to it that I am sure I would benefit from a rereading.  It is of course not particularly apocalyptic in a global sense, but the novel explicitly compares our own personal death, with other long vanished kingdoms.  We all have our personal apocalypse waiting for us at some point.

Our two descriptive (not qualitative) ratings were really intended for a more casual style of tale, but what the heck, here we go: 1 to 7 with 4 the mid-point and 7 high. Realism does not include the cause of the collapse or apocalypse, but is otherwise an assessment of how close to today's world is the setting. Could you imagine your friends, or families living through the situation. Readability is not literary merits, but literally how quick and painless of a read.

Realism:  The story does actually involves issues of supply, and concerns of being cut off.  It is an uncommon story of survival, but a realistic one: a 7.

Readability:  It is a novella, so it is short.  But there is a lot of thinking and philosophizing going on its short length.  In general, the issues are spelled out fairly clearly, so you don't need any esoteric knowledge, or a sixth sense for symbolism to catch a lot of what is going.  A relatively painless literary 4.
Posted by russell1200 at 7:00 AM

I think I have read this one somewhere but can't remember where. Maybe it was an excerpt from my college German Lit course. It just is really familiar for some reason.

Pioneer: Sounds like a possibility: I presume the Swiss version of German counts. Of course a vague sense of memory has a certain appropriateness with regards to this book.

I've never heard of it, but it sounds like it might be a "Golden Pond", i.e. something I don't need to be seeing at my age. Too close to the truth. I'll ponder on it, it does sound interesting.

Harry: From what I know of Golden Pond, this one is a little more elementary. You don't get all the interpersonal drama. There is a positive element to the realistic ending.