For Those in Peril on the Sea: A Review

Colin M. Drysdale's For Those in Peril on the Sea is an island hopping zombie apocalypse set just north of the Caribbean Sea along the Atlantic Coastline in and around the Abacos Islands off Florida.  It is intended to be the first in a series, but acts well as a standalone novel that wraps up the immediate issues of survival. The next novel, The Outbreak, is a parallel story, rather than a sequel,  set in Scotland. 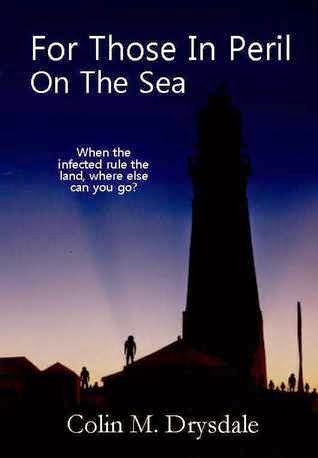 Per the blurb in the back of the book, Colin M. Drysdale (a nom de plume) is a marine biologist who in addition to writing numerous works on the subject, at one time worked for a number of years around the Abacos Islands setting that is featured in the book.  He notes that he is a fan of Post-Apocalyptic fiction, and notes John Wyndham's Day of the Triffids as a particular inspiration to this novel.  He now lives in Glasgow, which explains the setting for his second novel.
Like the author, I have always been interested in the sailing-apocalypse.  Day of the Triffids ends up on an island, but I sort of like the idea of cruising around in a sailboat. For me Luke Reinhart's Long Voyage Back is the classic of the genre.  Given that some folks seem to be under the impression that a sailboat is the perfect real apocalypse ride-out/but-out vessel, with non-swimming zombies, how can you do better?
As is common with zombies these days, the zombie-apocalypse is given a scientific veneer.  The insanely quick moving breakout is a modified form of rabies.  Almost any contact puts the victim at risk, and there are apparently no immunes.
Mr. Drysdale's zombies are not particularly smart, but they are really fast, and reasonably strong.  Think of them as being more like somebody hopped up on amphetamines (like a rabid dog) than a sluggish shambler.  It is not impossible for a person to beat a zombie one-on-one, but there is usually more than one.  So for the boating folks, any land with zombies is off limits.  The zombies will win any extended encounter.  What is worse is that while zombies don't swim, if they do manage to get dumped into the water, they can float to some extent.  So there is no guarantee that any cleaned up island, or boat in harbor, will stay free of them.
With easy scavenging being limited, and the necessity of staying on the boats becomes evident, an ideal long term survival strategy becomes problematic.  How are the survivors going to get enough fresh fruits and vegetables to avoid malnutrition.
A lot of the story involves the extreme psychological duress that the survivors are going through.  Some handle it a little better than others, but none are immune to the depression inducing situation. The story never descends into the looters versus homesteaders so common in apocalyptic fiction.  The situation is too dire.  But there is a lot of personal conflict, and as the story indicates, you don't have to have open gun fire to get a deadly situation:  a lack of cooperation alone will do it.
Did I like the book?  Yes.  It starts off with some clumsy writing at the beginning of our story.  The author is almost a poster child at times for  not "showing us" versus "telling us" mistake.  He also has the occasional forward looking narrative comment that end up being a tension spoilers.  But as the story went along it settled down and became a fairly tense affair.
We now come to our two descriptive (not qualitative) ratings: 1 to 7 with 4 the mid-point and 7 high. Realism does not include the cause of the collapse or apocalypse, but is otherwise an assessment of how close to today's world is the setting. Could you imagine your friends, or families living through the situation. Readability is not literary merits, but literally how quick and painless of a read.
As I have noted in the past, zombies tend to be an inherently unrealistic causer of apocalypses; particularly so when there continued presence intrudes on the story line.  I will say though, that the shear deadliness of this crew is so extreme that in some ways they become reasonable stand ins for violent conflicts with large groups of anarchic humans. Given that the story is not set over  a particularly large period of time, it is very likely that boaters in the Caribbean would be unsafe approaching land, and safe pillage would be rare.  There is limited room for clever planning.  Good guys and cute kids die. Given the realistic arguments of fighting versus farming, and issues of leadership, I will call it a 5.
Readability is straightforward.  The slight clumsiness I noted above is not actually a factor in this ratings.  It is a fairly quick and to the point read.  It is only a page turner in places, and it did slow down a little at times. It's a five.
Posted by russell1200 at 7:00 AM