Neal Stephen's Anathem is a novel set in a somewhat futuristic monastery on an earth-like planet, Arbre, that appears to be in the process of a slow decline.  Life gets interesting when some sort of space ship like object shows up overhead. 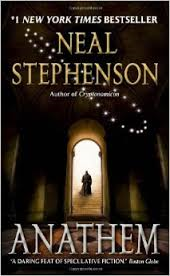 Being lazy, I will repeat the biography for Neal Stephenson that we used when reviewing REAMDE:

Stephenson is an extremely well known author; one generally considered to fall within the science fiction genre, although not all of his books are classical science fiction. We discussed an essay of his a short time ago.

This novel got a lot of attention from mainstream reviewers (NYT) because it came out shortly after his reputation making, to general audiences anyway, historical novels, Cryptonomicon and The Baroque Cycle.  As we will see, I think it's release has been the start of a slide in the quality of his output.
The novel starts in a slightly futuristic monastery:  it has a rather archaic look to it, but buried within the stone walls is some fairly sophisticated equipment, and the minimalist garb of the monks is a self shaping affair capable of many wonders.  Although it was not immediately clear to me at first, these monks are an odd combination of technological-scientific theoreticians rather than faith based worshipers.
So how is it apocalyptic?  Well this earthlike planet has gone through many collapses.  If it were the earth, it would be the earth of the far future after a number of modern civilizations have collapsed, including at least one that  used nuclear bombs.  At first I thought they were an old earth colony, but it is better to think of the planet Arbre as simply being an alternate Earth of the far future.  A far future with technology levels similar to ours, but with some really cool wiz-bang gadgets that they still make and use from earlier eras.
So one of the main sub-themes is about societal collapse, and the warning signs that it is coming.  The arrival of faith based, non-rational religions setting up theocratic states in response to the problems of an advanced society is one of them.
There are a number of Socratic discussions throughout the book about the meaning of reality.  Given that I have been reading a fair amount on the Philosopher Epicurus (341–270 BC) lately (see The Swerve, Nature's God, Lucretius' De rerum natura (~54 b.c.), Alexander Pope's An Essay on Man (1734), et al), I don't think I can be accused of having a disinterest in this type of subject.  But when the discussion is done in the form of renamed philosophers taking various cheap shots at an simplification of the philosophy of religion, it gets stale.  Add in an over abundance of extremely detailed descriptions of many of the high tech items we see as Erasmus, our wandering monk, surveys the land, and it is a very very long tedious read.
There is a little bit of action at the end, although one of the few bits of true sci-fi "magic" turns the ultimate finally into something of a let down.  For what its worth, in the end, Epicurus win.

The more he knew of the complexity of the mind, and the cosmos with which it was inextricably and mysteriously bound up, the more inclined he was to see it as a kind of miracle - not in quite the same sense that our [religious orders] use the term, for he considered it altogether natural.  He meant rather that the evolution of our minds from bits of inanimate matter was more beautiful and more extraordinary than any of the miracle cataloged down through the ages by the religious of our world.

And all this as part of a wedding send off speech!
So while I can't say I hated the novel, I wouldn't really recommend it either.  It isn't that there is nothing there of interest, it just takes far too long to really get there.  Why not just read the actual classical philosophers that the author is parroting?
We now come to our two descriptive (not qualitative) ratings: 1 to 7 with 4 the mid-point and 7 high. Realism does not include the cause of the collapse or apocalypse, but is otherwise an assessment of how close to today's world is the setting. Could you imagine your friends, or families living through the situation. Readability is not literary merits, but literally how quick and painless of a read.

Realism is low.  It's a sci-fi setting on a far future, recovered post-apocalyptic earth.  Kind of a cool idea, but it is not a setting any of us is likely find themselves in.  There is no magic per se, but even with all the gee whiz explanations, the level of the sci-fi comes close.  The infrequent actions scenes really heavily on sci-fi magic.  It is a one.

I guess I am too much a cynic to disagree, but too much a Stephenson fanboy to agree.

I think that he would do well with better editors, but that is a fault with the industry, not a writer.

I rather enjoyed it myself. It isn't his strongest work, but it is a fun read. (for me)

Keep up the good work

Have you read "Diamond Age"?

D: I disagree. He became big enough that he could ignore the editors, and became flabby. Brilliant flabby is still flabby.

Yes, I have read the Diamond Age.

I've been looking for something good to read. There are so many post apocalyptic novels out there on Kindle now that people self publish, and many, if not most of them, are awful.

Harry: I feel your pain. With them, I don't even read the 5 and 4-star reviews. I go straight to the 3 and under star reviews to get the straight dope.

John S. Wilson (Joshua and Traveler, etc.) is one of the few self-publisher types who I have made a point to read multiple examples of their work. There were others that were o.k., but not o.k. enough to neglect some other offering. In general, the small press offerings are much better.