Edan Lepucki's California is an apocalyptic novel set in the northern woodlands of California, and retrospectively in Los Angeles.  It is a slow economic/environmental collapse which gives it a feeling of being both an apocalypse-in-progress and post-apocalyptic at the same time: it all depends on which direction in time your looking in. 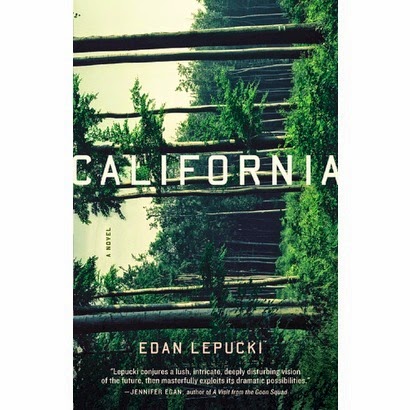 Edan Lepucki was born (~1980) and raised in Los Angelos, where she know lives with her husband, Patrick Brown, and their very cute little boy.  She graduated from Oberlin College, which is the basis for the novel's (Walden Pond meets Ag. School) Plank College.  She currently writes for  The Millions, teaches creative writing, and is a recovered social media junky.
This is her first published novel, and is noteworthy for being at the front line of the ongoing [at this writing] battle between Amazon and Hatchette Book Group which made it initially hard to come by.  There is some irony as, her above noted husband, Patrick Brown is employed at Good Reads (since February of 2010): currently as  Director of Author Marketing, and Goodreads was gobbled up bought by Amazon last year:  LOL/ouch - both of them are pretty quite about that one.
The collapsing world of California is something of a gelling of earlier apocalyptic writings of literary set (as exemplified by Margaret Atwood, and Octavia Butler): a slow economic strangulation caused by environmental and political collapse.  The misery is, of course, not shared equally.  It is not a perfect scenario, it begs a lot of questions as to how all the technology keeps going with such a small basis for production, and tends to ignore the obviously logistics (ie. fuel) issues of keeping a system going with the reduced cost sharing.  But I like the scenario.

The gradual collapse scenario seems to fit in better within the current world we live in than the various militia, instant pandemics, zombies, or one-week banking collapse scenarios commonly postulated.  You don't really even have to buy into the specific causes to go along with the story.  The world is sucky, and going to get worse: easy enough.
The novel starts with an almost-30 year couple, Cal and Frida,  who are living in the woods in Northern California after having made an escape run from Los Angeles.  They are surviving, if not thriving, when the young woman finds out she is pregnant.  This opens a whole can of worms.

The pregnancy forces the couple to try and find a larger group of folks where there will be a little more stability.  But once you add in more people, you add intrigue.  And more so than in most survivalist tales, it is a lot more about who is on whose side that matters, than tactics and supplies.

So although the dire setting is important, the focus of the story is on the relationship of the husband and wife in these very changed circumstances, first on there own in the woods, and then with a new community they find. Per the author:

“The tension in the book is something I’m really thankful for as a writer,” Lepucki says. Because so much of the novel investigates the unknowable distance between two people, Lepucki notes, “What I wanted to write was a domestic drama…I love social interaction and writing about that. Intimacy and the way people speak to each other and don’t speak to each other.” She is also interested in secrets, and in her fiction—and specifically in California—likes to “toss them out, left and right, like bombs everywhere.” Kirkus, Edan Lupanski,  10 July 2014.

At first I took her style to be a little too light and breezy.  The details of survival were a little thin. Cal had farming/gardening experience, and Frida can bake, but it all seemed a little too easy.  But as the story progresses, you come to realize that the "ease" is more one of insufficient observation, particularly on the part of Frida, than reality-based.  No one is doing well:  not the pirates, the small homesteaders, the nea-anarchist terrorists, or the walled off suburban enclaves.  It is falling apart, granted a differing speeds, for everyone.

What is particularly interesting is to see a set of protagonists with a "progressive-liberal" mind set, and an author we likely shares that mindset, with a story that is honest enough to point out that good intentions don't necessarily bring good results.

I did like the novel.  Frida and Cal are, in very different ways, social innocents.  There lack of savvy amongst strangers does induce some teeth grinding moments.  To some degree, their cluelessness undercuts the above noted theme of secrecy between people who are ostensibly on the same side.  It becomes more an issue of really bad social tactics than secrecy per se.  But the novel ends with a flourish, and it all raps up in a nice little dystopian package in the end.

Realism is high if slightly suffering for its breezing over the catastrophe itself.   Cal has the necessary skills to make a sustainable garden grow, but there is no sugar coating around the possibility of one bad season wiping them out.  That alliances and group antagonisms will go a long way toward deciding long term survivors.  But it is interesting that the author doesn't loss sight of the need for basic survival skills.  In a land without food, the farmer is everyone's friend.  It is a six.

Readability is tough.  There was a fair amount of philosophical discussion at various points.  Mostly bringing up various communist-anarchist and other early rebellious type thinkers.  I didn't have time to look them up, but I suspect that all of this adds a second level to the proceedings that I was missing.  A battle of philosophies as outlines by the activities of the various groups.  So I would not call it an entirely straight forward delivery.  Call it a literary 5.

Another one to add to my list I see.

This group of reviews probably has more that are a matter of personal taste than any other. I just try to give enough info so that you don't feel surprised.