Graham Masterton's Famine is a cold war era apocalyptic novel set alternately in rural Kansas and Los Angeles.  The apocalypse in this case is caused by a very quick (a few weeks) breakdown in the United States food system. 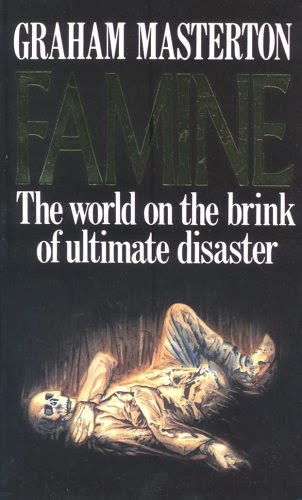 Graham Masterton (1946-) is mostly known as a horror writer, but writes in a number of genres including, oddly enough, presumably non-fiction sex instruction manuals.  This novel is one of his many "thriller" novels.  He appears to be part of the dying breed of mid-list authors: no homeruns, but selling enough books to keep getting published.

What happens when the richest nation on God's earth is driven to the outer limits of starvation? When the grain crop failed in Kansas it seemed like an isolated incident and no one took much notice. Except Ed Hardesty. Then the blight spread to California's fruit harvest, and from there, like wildfire, throughout the nation. Suddenly America woke up to the fact that her food supplies were almost wiped out. Her grain reserves lethally polluted. And Botulism was multiplying at a horrifying rate...

All of this sounds like something from the 1970's concerns about over population.  But it's a 1980's novel, so it is actually more of along the lines of a cold war diabolic plotters novel all taking place over an insanely short couple of weeks.
The plotline involves a large (85,000 acre or ~130 square miles) farming enterprise in the State of Kansas.  The father and brother who were going to run the place have died, and their financier, as sole heir, is now running the farm.  An odd fungus-like growth attacks the wheat crop and soon begins spreading.  His fancy pants New York City wife is bored so she goes off to visit her sister in Los Angeles.
Given the authors stint as a writer for Mayfair, and the British edition of Penthouse Magazine, it is not too surprising that there is a fair number of pornographic sexual vignettes sprinkled throughout the novel.  Much like Lucifer's Hammer, the good guys are not particularly a faithful group of people, and religious folks who show up are going to be opportunistic nut jobs.
It does get a sliver of societal collapse at the end.  Rather thin in the details in some spots, and overly detailed  in others, the treatment is a bit haphazard.  There is a little bit of bug-out action, but the bug-out itself is almost a non-event.  Drive from Kansas to Los Angeles in the middle of an anarchistic collapse:  Sure! Why not!  Some of the folks bite the dust, but the usual reaction is something like "Gee, to bad that sniper got Charlie.  Well we better try and find a new car at the next town."
Is it any good?  Well, as a nostalgic blast from the past it has some merits.  The thriller's storyline and sense of logic is rather thin.  That so much activity can center around one dull financier turned farmer and his pretty dilettante wife just boggles the mind.  So no, other than as a curio piece, I don't recommend it.
We now come to our two descriptive (not qualitative) ratings: 1 to 7 with 4 the mid-point and 7 high. Realism does not include the cause of the collapse or apocalypse, but is otherwise an assessment of how close to today's world is the setting. Could you imagine your friends, or families living through the situation. Readability is not literary merits, but literally how quick and painless of a read.
Oddly enough, buried under the absurdities of the conspiratorial plot line, there are a few stabs at realism.  The religious cult does actually try and barricade itself into a grocery store as a way to extend their survival possibilities.  But beyond that, not so much.  People can drive around all over the place without concerns for an open gas station, at the same time everyone is running out of food.  The combat is more in the way of thematic than realistic.  The novel is enough of the period to come off as dated.  We will be kind and call it a 3.
Readability is low.  Readability, by our true definition is actually one of the problems with the book.  If it was a true page turner, and a fare bit shorter than its small print 376 pages, you might have a sort of fun story.  But it is too long, and too disjointed, for such silly tripe.  As a "thriller" it rates a rather low 3.
Posted by russell1200 at 7:00 AM

More than likely suffers from dated romanticism I would imagine. Many of the older writers just don't have a clue as to how social interaction would really evolve.

Pioneer: Maybe. I am not sure romanticism is so much at work here as the 1980s love of very mild porn/sex elements within their novels, combined with a slower paced adventure aspect geared toward a more general audience than your typical survivalist, or men's adventure fare. I don't think there is even much thought to "realism" other than using the tropes of the day as plot points.

To add to my earlier comment: think of a poor man's Harold Robbins.