William F. Nolan and George Clayton Johnson 1967 classic, Logan's Run, is a dystopian post-apocalyptic novel where the world is overseen by a computer superbrain that (somewhat) takes care of everyone's needs, but also insures that nobody lives past their 21st birthday.  The original was intended as a standalone.  But after the release of the movie, with its greatly changed storyline, Nolan wrote a number of other stories in the series.  I "read" the recent audio version. 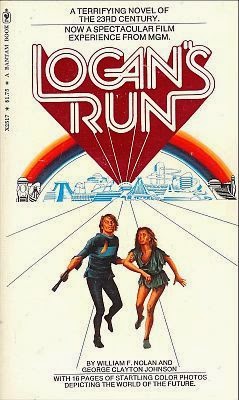 Both authors had a fair number of published works, many of them with speculative themes.  Logan's Run is by far their most famous novel. William F. Nolan wrote many more works, but  George Clayton  Johnson had a number of interesting highlights: author of the first Star Trek episode (The Man Trap), wrote the story that became the basis for the movie Oceans 11, and also wrote the "lost" Twilight Zone episode.
In this alternate far future, society is a mostly carefree place where people work a little and play a lot.  With most of the actual work done through automation, most people-work is of a rather light touch.  One extreme exception is the Sandmen.  These are the men who hunt down the runners. And Logan3 is a Sandman.
Runners are the folks who don't want all the fun to end on their 21st birthday, and take off running to avoid their fate.  As the novel explains, the hard limit on living to the age of 20 years and 364 days came about as a solution to combined problems of world overpopulation, and the youth bulge of the baby boomers (not called that in the novel).  So the dystopia is all the boomer's fault.
The twist is that, Logan3, the Sandman, decides to become a runner himself.  Logan's flight involves a number of highly episodic adventures as he makes his way to a hoped for, somewhat legendary, sanctuary.  He meets up with Jessica, also a runner, very early on.  She of the great beauty and heaving bosom, plays a much more promising and active part than most heroines of this time period.  With  Logan being the  trained killers and survivalist, she is often ignored and overlooked, and manages to save the situation more than a few times.
As the novel progresses, it is obvious that this Utopian-Dystopia's automated controls are slowly falling apart.  That, and the episodic adventures among strange folks, gives the novel a little bit of the whimsical feel of  Jack Vance's (earlier) Dying Earth series. Granted Logan and Jessica are more sympathetic, and there is a little more linkage (key words "a little") between the stories, but it all seems rather melancholy and a bit surreal.
It should be noted that many folks in the past would have rated the novel more highly than the famous movie.  Now that the movie has become a camp-classic, the favor-balance between the two is more even.  Both are a little dated, but fun in their own way.  I did like the novel, though I think Nolan's statement that is a multi-layered story is a bit dubious.
We now come to our two descriptive (not qualitative) ratings: 1 to 7 with 4 the mid-point and 7 high. Realism does not include the cause of the collapse or apocalypse, but is otherwise an assessment of how close to today's world is the setting. Could you imagine your friends, or families living through the situation. Readability is not literary merits, but literally how quick and painless of a read.
This is not a particularly realistic novel.  It is set in a highly improbable distant future.  I would give it a one except that most of the science doesn't stray that insanely far away from what we have to day, and their is no blatant magic as in the Dying Earth sagas.  It is a 2.
Readability is easy.  It is mostly a page turner through most of its relatively short (149 pages) length.  I gather most think the movie moves faster, but the novel isn't too far behind.  It is a six.
Posted by russell1200 at 7:00 AM