A Lovely Way to Burn: A Review

Louise Welsh's A Lovely Way to Burn is a murder mystery set in the middle of a pandemic that his hit London, and the British Isles in general.  It is intended to be the first in a series of three novels, but works well as a stand alone.  In an interview she has said that the later books will not share characters with the first one: a good thing as not too many of them are still around to fill out the dialog for the follow on novels. 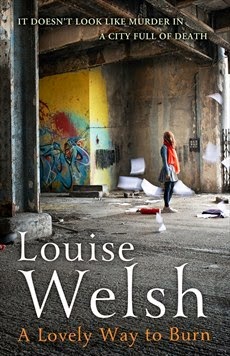 Louise Welsh (1965-) was born in Edinburg, she is now based out of Glasgow Scotland.  She has been the owner of a used book store, a radio reporter, and a writer of crime fiction. This is her first crime fiction set in an apocalyptic setting.  Although the author is openly gay, and professes an interest in various equalitarian social causes, this world view is not force fed to the reader in the novel.

A pandemic called "the Sweats" is sweeping the globe. London is a city in crisis. Hospitals begin to fill with the dead and dying, but [shopping channel spokes mode] Stevie Flint I convinced that the sudden death of her boyfriend Dr. Simon Sharkey was not from natural causes.

Actually, there isn't much mystery to the fact he was killed, the problem is getting anyone to investigate one more dead body in the middle of a pandemic. So Steve, the shopping channel spokes model,   starts her own investigation.
The murder investigating by Stevie is reasonably well done: not lock tight, but interesting.  What I was also intriguing was  the various local permutations of what is obviously becoming a big collapse.  Stevie gets a lot of pressure to show up at her (go figure) short staffed work place, some of the folks she talks in her investigations are on their way out the drive with kids belted and stuff piled up in the back of the car.  More than a few witnesses don't survive to the end of the story.
The subtheme of the dubious commercialization of medicine weaves its way through much of the story, but tends to get overwhelmed by all the death.  It is also not particularly clear that some of the bad actors wouldn't eventually have gotten their due except for the distractions of the pandemic.
It was mostly fast paced and a page turner at times.  Stevie gets herself in some tight spots, but she is not an idiot, or a meek mouse, so while she does get a bit of help here or there, she does a reasonable job of getting herself out of trouble as well.   As a spokes model, she is obviously good looking, and aware of it, but the author does a good job of not letting that dominating the story.  It's just a fact that occasionally becomes important.

As is typical, I thought the plague was just a little too fast-acting.  She seems to have modeled it off the worst stories from the black death, rather than the more likely correspondence with other killers such as AIDs, Polio, or the Spanish Flu of 1918.  Oh well, as I said, that's normal.
So I liked it.  If you like murder mysteries, and you like apocalyptic stories (both in my case), you will probably like this story as well. If you are a fan of one, but not the other, you may find the mixture a bit distracting.  The next in the series is supposed to start up in a prison, which could make for a very tense, interesting situation.  A murder mystery amongst the dying murderers?
We now come to our two descriptive (not qualitative) ratings: 1 to 7 with 4 the mid-point and 7 high. Realism does not include the cause of the collapse or apocalypse, but is otherwise an assessment of how close to today's world is the setting. Could you imagine your friends, or families living through the situation. Readability is not literary merits, but literally how quick and painless of a read.
Realism is straightforward. It is in the here and now, and none of the technology or science is speculative.  The characters are drawn from everyday life.  It is a little too short in timeframe to have people starving in the streets, but looting and mayhem and people heading for the hills are a feature. It is a seven.
Readability is also straightforward.  Granted a murder mystery can slow you up while you try to figure out what is going on, but it is frequently a pager turner and generally keeps the action moving: a six.