Robert McCammon's Swan Song is a horror-mystical apocalyptic novel set during and after a global thermonuclear war. 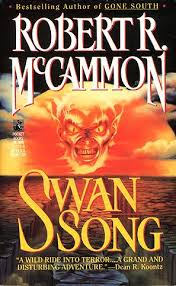 Robert McCammon (1952-) From Birmingham, Alabama, was one of the important horror novels of the late 1970s thorough early 1990s.  By 1991 he had had three best sellers, including Swan Song (1987).  Swan Song, along with his later Mine, and Boy's Life, won the Brahm Stoker Award.

To be honest, it is telling of what was considered "quality" in the horror genre of the time, that such long, turgid prose is thought to be honorary, rather than commercial.  It was the time of Anne Rice's ever lengthening vampire tales, and Steven King's long novels ruled the day.

Well let us move on to The Blurb:

An ancient evil roams the desolate landscape of an America ravaged by nuclear war.

He is the Man with the Scarlet Eye, a malevolent force that feeds on the dark desires of the countless followers he has gathered into his service. His only desire is to find a special child named Swan -- and destroy her. But those who would protect the girl are determined to fight for what is left of the world and their souls.

In a wasteland born of rage, populated by monstrous creatures and marauding armies, the last survivors on earth have been drawn into the final battle between good and evil that will decide the fate of humanity....

The evil is literally a demon of some sort, and the good guys have a magic crown that helps bring warmth and hope to the weary. There are Peter Pan and the Lost Boys Robin and his orphan bandits, with a little prodding from the miraculous crown/emergency surgical instrument,  can be counted on to help the good guys, .  And...all sorts of mumbo jumbo.

The magical elements start somewhat low key at the start of the novel, and the nuclear Armageddon is horrific enough in a somewhat realistic way.  But as the novel slowly gets moving, and I mean very slowly gets moving, the mystical element becomes more pronounced.  If you have set yourself the goal of owning every novel that features an evil crazy clown, you will need to own this novel. And there is a bunch of magical mumbo jumbo.  I mean yes, eally!  They have a magical far seeing, visionary crown, and it gets pressed into service as a surgical tool!

Most modern authority figures, including those of established Christianity and military figures come out looking fairly poorly in the process. The main warm and fuzzy comes from the little folk of all races working together, and with convenient magical help, to make a little homestead in the destitution.  It has a bit dated of a feel.  The only homosexual is a Nazi uniform wearing out of control pedophile.  No sacrificial gay heroes in this one.

It all ends up in Pocahontas County, West Virginia, on a penultimate last confrontation between the evil army and the atomic "god" that sits atop a mountain.  A few good guys will die, just to make things interesting, if you can call very long dying moment soliloquies interesting. But it is all fairly obvious how it is all going to come out in the end.  The only, slightly interesting question, is the exact mechanics.

This novel makes a fair number of "favorite" apocalyptic novel lists.  It won't be on mine.  It is dated, sloppy, and overly long. It is maudlin and overwrought to the point where it slams you like a body blow, leaving you stunned and shaken; obviously some folks like that.

Realism?  Is there any?  Is Tolkien realistic?  There is some lip service to supplies, and their necessity, but very little real evidence as to the lack of supplies.  People are able to live off leftover canned goods seven years after the fact. And the evil army has no issues with stale gas. Or ammo shortages.  Somehow after 7 years of overcast nuclear winter, there is still a fair amount of activity. You get sergeants named (phonetically) Sh_t Pants.  The larger battles are insanely simplistic, with absolutely no concept of the deadliness of modern weaponry.  While there are no elves, there are demons, and magic mirrors, and crowns, and.... whatever; Its a 1.

Readability suffers from length.  How the horror fans of the day could deal with these slow moving stories is beyond me, but the slow pacing gets to be like nails on a chalk board after a while.  This is not a page turner, unless your just desperate to finish it.  There is a fair amount of muddled mysticism.  Most of it doesn't really go very far, but it does add an element of confusion.  It's a 2.
Posted by russell1200 at 7:00 AM

Russell - i don't know how you do it but you write some of the funniest reviews that i have ever read. and being that i am the type of person who once picks up a book - HAS TO READ IT TO THE END - i thank you. this is one that i will never touch.

Kymber: I try to put at least a neutral spin on the reviews, but this one has already sold a gazillion copies. If he had tightened it up to about half the length it might have been sort of scary and creepy.

It reminds me of how Steven King can write some awesome short stories, and then write some of the flabbiest longwinded novels out there.