The Fifth Wave: A Review

Rick Yancey's The Fifth Wave is an apocalyptic alien invasion novel set near Cincinnati, Ohio, which starts somewhere in the fourth wave, and the 3% of humanity that are left are scattered, isolated, and generally having a lousy time of it.  This is the first installment of a trilogy, with the second book, The Infinite Sea, is available at the time of this posting.  There is a planned movie, not released at this point.  I "read" the audio version of the novel. 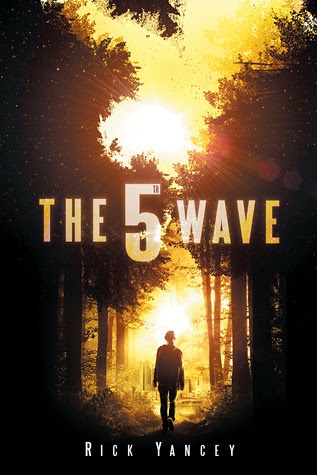 Rick Yancey, per the official bio, is a native Floridian and a graduate of Roosevelt University in Chicago. He earned a B.A. in English which he put to use as a field officer for the Internal Revenue Service. Inspired and encouraged by his wife, he decided his degree might also be useful in writing books and in 2004 he began writing full-time.  He currently has ten books listed to his credit.
The novel starts with our protagonist, Cassie, in desperate straights, looking back on how it all started.  So when the alien mother ship shows up overhead, we know it isn't going to be good, regardless of the wishful thinking of many.  And this is one of the subthemes of the novel.  Wishful thinking isn't going to get you very far in desperate circumstances.  Followed by the subtheme of, "trust no one".
So we start of with a series of deadly attacks in a fairly strict sequential order.  The first wave is a bid electromagnetic strike to knock out the electricity and electronics, followed by a series of large rocks dropped on ocean fault lines to swamp coastal areas under tsunamis or directly on the larger inland cities as needed.  The third is a 99% deadly pandemic.  And with the fourth wave, it finally gets personal.  Alien-human look alikes, backed up by the search-and-destroy drones, hunt down and slaughter the few remnants.  As we noted, we start with Cassie, alone, in the middle of the fourth wave.

The book revolves around Cassie's determination to find and rescue her little brother, who for unknown reasons, was carted away, rather than executed, by the human lookalike aliens.  She eventually runs into another  survivor, Evan, and is forced to make a decision about trusting anyone.

Although the early storyline involves more tension than in-the-moment action, the action eventually gets rolling.  Since it is a YA adventure story, I wouldn't say that the action is entirely plausible, and there are an awful lot of circumstantial happenings that push the envelope of credibility too close to the breaking point.  But one advantage of keeping the action moving is that you get more concerned with finding out how it is all going to be resolved, highly problematic with two more books of potential adventure to come, than worrying about all the plot details.

As noted, there are a number of subthemes woven through the narrative.  Eventually it becomes clear that the aliens actively choose to exterminate humanity, rather than coexist with us.  It brings up uncomfortable questions about the nature of our current occupation of this planet, and our decisions as to how use its resources.  Fortunately for the storyline , the aliens for the most part are found to be cruel enough to question whether their stewardship will necessarily be much better.
It makes for an entertaining enough read.  There is some romantic explorations between Cassie and Evan that beg the question of what is appropriate for a YA novel.  It is nothing that a teen wouldn't know about, but not all parents would find it appropriate.  For myself, it was an interesting intermixing of the romantic, with the more usual gritty survivalism found in your typical apocalyptic tale.  I give it a moderate, if not ecstatic recommendation.

Realism is a bit tricky.  Aliens are not particularly realistic, particularly not at the invasion level.  But much of the alien threat is pretty much within the same general scope of hazards as people can do to themselves.  The aliens clearly could wipe us out, but they don't want to destroy the planet's ecosphere for their own eventual uses.  So there means are limited.  They use droids, like we do, they use biological weapons, like we have, and they blow up cities, like we have.  Cassie has serious issues with supplies.  So I will say there are more realistic elements than not:  it is a 5.

Readability is more straightforward.  It is not a page turner through all points.  There is a fair amount of mystery and suspense, which while flavorful, does slow down the proceedings: it is a 5.