Jamie McGuire's Red Hill is set in a series of small towns, and the Red Hills of Kansas, as a small group of loosely associated people attempt to escape from a zombie apocalypse. These are slow (between walk and jog pace) zombies, who procreate by biting, but seem to have gotten their initial boost through a doctored up flu vaccine.  It is a standalone novel, and I am not aware of any planned sequels.  I "read" the audio version of the book. 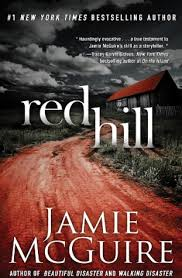 Jamie McGuire was born in Tulsa, and raised in Blackwell, OK. She attended the Northern Oklahoma College, the University of Central Oklahoma, and Autry Technology Center where she graduated with a degree in Radiography.
She now lives in Enid, OK on a thirty acre ranch with her three children and husband Jeff, who is a a cowboy.  Like Scarlett, one of her major characters, she has red hair (see photo below), two daughters and is a radiologist.  As she notes in an an interview, Scarlet is a bit of an alter ego:

I came up with the story two years ago when I was in X-ray school. I was in classes or clinic 40 hours a week, so I cleaned houses for the doctors to get by financially. One of the doctors had a ranchette an hour and a half away from school, in the middle of nowhere. I thought it would be the perfect place to escape to if the threat of zombies ever became real. I’m a huge The Walking Dead fan, and my oldest daughter and I have eleventy billion zombie escape plans. Every time I went out there to clean, I thought about that story, and what it would be like if my daughters were with their father during the first day of the apocalypse. How would they get to me?

Her earlier, very successful, novels had more of a YA-romance theme, so this novel was pointedly a change.

As to the location of the story, although the town names are fictionalized, the location is in a series of small to very small towns of Oklahoma, and then later a ranch just over the border in Kansas.

Based on the rhyming pneumonic (paraphrased below) that Scarlett's daughter made up:

and the mutterings of one of the other protagonists, Nathan,

Less than a half hour down the road, I noticed a small sign that read Highway 123. Another small two-lane, it ran all the way to Kansas.  It was less than an hour away, and if I remembered correctly from where were the state line. Beyond that was nothing but farmland and ranch land for miles…

I don’t see an area that fits the exact geographic details of the story, but given the location of the Red Hills of Kansas, which lie along the central Southern border of Kansas with Oklahoma, we are likely about 70 west of the Wichita/Oklahoma City longitude (North-South) line, getting somewhat close to the Oklahoma pan-handle.  My guess is north of Buffalo, OK along Route 183.  The town of Anderson may use the authoress' current hometown of Enid as its (very rough) basis.
This is a lot of relatively flat open land.  It means that zombies that are walking around will be able to see a long way, and travel will be tough.
The narration jumps between three groups of characters.  A mid-30s divorced mother, Scarlette, who is trying to find her children (it's Dad's weekend) and get them to the Red Hill Ranch that is owned by a doctor she works for.  The second group is a young father with his young special needs daughter. Finally a group of four teenagers. The two girls in this group being the Doctor's daughters.

All of them are looking for safety, and variously run across each other in passing as they separately make their escape.  Although the novel slightly overuses coincidental occurrences as plot devices, their coming together is no more coincidental than any story of how people from different backgrounds come to be in the same place - think of your typical workplace.
The novel doesn't seem like it at first, but is much more deadly to its heroes than your typical zombie-fare.  Lots of major characters bite the dust.  The death of likable bit players is the norm in zombie fare, but we're talking major players here.  The author, obviously likes strong female leads, but not all the women are titans of fortitude, and they are not super SWAT team types either.
The authoress is familiar with guns, which is good, but a little light on the specifics.  Glocks don't have a safety that disarms the trigger (the safety is within the trigger mechanism), a feature now copied by other manufacturers.  More to the point,  she underestimates how difficult it is to make a killing headshot.  Shooting a living person from the front only gives a 3x5 postcard size area for an instant kill.  And with zombies, shooting off their jaw or cheekbone, may not stop them.

On the plus side, most of the very heavily armed characters bolt action rifles, with a relatively small magazine: hunting rifles.  This tends  to slow up their engagement speeds, and you don't get that light auto-carbine fire hose of death effect of some other novels.
Supplies are more of an issue than in many Z-stories.  There is not a presumption of easy looting.  The zombies are too large in numbers, and even in the smaller towns, are too dangerous to just wander around pillaging.    The Red Hill Ranch, where the characters are trying to bug-out to,  is thus that device common to many apocalyptic novels, of that conveniently under utilized, ubber-stocked bugout shelter left to the characters disposal.  My suspicion is, that since a lot of folks. and authors, are not kindly disposed to survivalists, it allows the author to have a bug out/survivalist story with normal folks in the action.

There is a lot more depth to the group dynamics than typical.  One person, making very questionable, possibly selfish, decisions, can drive the group towards very risky actions.  And the end results are not sugar coated.  If there is a little bit of the "all's well that ends well" at the end of the story, the reader is not forced to buy into that thinking, and it is easy enough to note the people missing people.

The issues with the characters past, ex-spouses in particular, don't just drop by the wayside when the ball drops.  The trauma and psychology of children in a disaster is not ignored.  Rather than just some talking bits of furniture dragged around through the story, the children, and parental concerns, are main drivers of much of the story line.

I did enjoy the novel, and would recommend it.  It is a relatively rare zombie novel that goes enough beyond the boundaries of the genre that I think a more general audience would enjoy it.  It is not perfect, the occasional, not really necessary coincidence, is pulled out of the hat a few too many times, and cuts into the suspension of disbelieve occasional.  The peppy tone of the ending brings the story to a conclusion, and truncates the storyline at a manageable point, even leaving a few looming items up in the air, but doesn't fit particularly well with the rest of the tone.  Calling the last chapter an epilogue, rather than simply leaving it as the last chapter, was a poor choice.  But those are quibbles.  I am not sure if this one is going to become a classic of the genre, but it certainly is one of the better ones I have read.

As zombie-fare go, it is fairly realistic.  Although the zombies themselves cut into the ongoing realism, the other various issues of survivalism, firepower, bad people getting loose, group dynamics, and extraneous emotional baggage within group dynamics are all there.  I think the supply issue needed to be pushed a tad bit harder.  At some point, there should have been a statement as to just how much food they have on hand, and the water without electricity issue was noted, but didn't seem that clearly resolved.  It is a five.

Readability is straightforward.  It is not a page turner, but the group dynamics, and personal issues are very well balanced with the high danger action points.  In the case of the audio version, it did not use a "radio" style delivery with special effects and different character voices, but the narrative voice did change between the three main characters.  It is a 6.