Europe in Autumn: A Review

Dave Hutchinson's Europe in Autumn is a spy thriller set in a fragmented post-apocalyptic Europe that has splintered (even further) into an enormous number of small political units.  In the background is a general economic malaise and depopulation caused by pandemic disease.  Instead of the big open bordered entity of today, you have a collection of diminished entities in a tangle of border controls and mutual suspicion.  Enter into this equation, Rudi, the cook turned spy-courier. 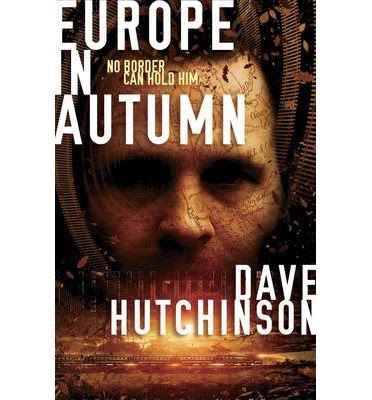 Dave Hutchinson (originally publishing under David Hutchinson) (Sheffield, U.K.;  1960-) has written a variety of fantasy and science fictions while squeezing a journalist's career into the middle of it.  His Amazon bio has him living with his wife and cats in London.
Rudi is an Estonian who would badly like to become a chef/cook with his own restaurant.  But fairly quickly into our story he is pegged as an ideal runner for a latter day Les Coureurs des Bois who are an odd non-state secret service that runs messages and peoples across the now highly fragmented and guarded borders of Europe.  Much of the story comes across as a somewhat futuristic John LeCarre novel featuring all sorts of mundane spy operations.  It is only fairly late into the book, that a plot line comes together that begins to bring many of the earlier threads back into focus and tie them together.
Eventually, a full secret spy war explodes on the scene and bodies begin to stack up.  An element of highly speculative science fiction does come into play fairly late in the tale.  This does throw off a little bit the general gritty, natural feel of the proceedings, but not in such an extreme way as to ruin what preceded.
A bigger failing is that as we get to crunch time, the author begins to skimp on some of the more interesting details of the spy craft.  An odd choice to go through endless, if tense, details of the waiting periods, and then rush through the active stage.

In all, I did enjoy it.  The spy novel stuff was fun, even if it got twisted in with a bit of sci-fi weirdness at the end.  Call it a qualified recommendation.  The feel of the novel is of a cold war espionage novel set to a science fictional near future alternate setting:  All right as a spy thriller, so-so as either apocalyptic, or science fiction fare.
We now come to our two descriptive (not qualitative) ratings: 1 to 7 with 4 the mid-point and 7 high. Realism does not include the cause of the collapse or apocalypse, but is otherwise an assessment of how close to today's world is the setting. Could you imagine your friends, or families living through the situation. Readability is not literary merits, but literally how quick and painless of a read.
Realism is high in the sense that all of this occurs in a world not too far down the road from our own, but low because of the highly speculative nature of some of the science fiction near the end.  There is an element of fuzziness and confusion that does a fairly good job of being much like the fog we live in.  It is a 5.
Readability is a bit harder to define.  There are no doubt all sorts of secondary allusions within the story that can be missed.  It helps to know a lot of obscure, to Americans at least, European factoids to get all the in-jokes.  At the barest level, it is a rather long (429 pp.) telling of a simple plot: a 3.
Posted by russell1200 at 7:00 AM

Interesting concept although in my opinion wasted on spy crap but that's just me I know.

I found it funny you mentioned the author seemed to rush or skimp. I think many writers have that problem. I know I do just on my small non-professional stuff.

Pioneer: I would nuance the "spy crap" idea. If he was going to do spy crap, he should have stuck more consistently with it.

Pacing of the action phase is absolutely critical unless you are simply going to just string one shoot-em-up after another: throw sh-t at the wall and see what sticks so to speak.