John S. Wilson's Traveler (paperback, Kindle) is a post-apocalyptic novel set four-years after an economic collapse has depopulated much of the country.  Set in what appears to be rural Ohio (mention is made of Mendon, and Fort Wayne, Indiana) where the starving remnants of civilization wander about trying to scrounge up a little to eat.  Some of the scroungers, are of course more violent than others, and our tale is the story of a young boy who through random happenstance joins up with a small group of "bandits".  The book is set in the same world as the authors earlier novel Joshua, but they are independent of each other. 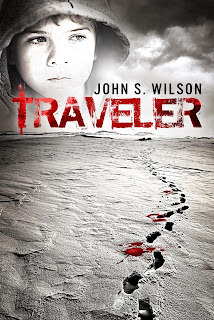 John S. Wilson, as self-described (source) has been a truck driver, warehouseman, security guard, air marshaller, insurance salesman, real estate agent, bottle inspector, assembly line worker, forklift operator, and stock boy.  His first novel, Joshua, has done well in sales, which convinced the author to continue the series.
The novel starts well into the period of collapse.  Although, I note it as being a post-apocalyptic, that is true only in the sense that modern society is gone.  The dramatic parts of the transition are past, but the slower, less certain societal transitions are still in progress.  Although, the physical portions of the story are mostly involved in the tactics of a small gang of highwaymen, with a little bit of military training, the back-story theme is about what is truly right or wrong in a world of starvation and desperate survival.
The main character is a teenager, Jason, who a group of agreeable bandits capture with the intent of garnering some information about an area he has passed through.   Figuring that a teenager who can survive three years on his own in a collapse has some natural survival instincts, they convince him to join up with their gang.  The gang takes something of the middle road in their activities, although they will take just about everything useful their targets have, they treat potential sources of information well, and don't make a habit of killing people out of hand.  Of course, being a bandit is a rough business, so their good behavior is often more theoretically than real.
James, is ambivalent about all this.  He eats better with the bandits, but he is not of a particularly violent disposition, and has more the temperament of a sneak-thief, than a mugger.  Much of the tension of the novel comes from him deciding what is both the wise, and the right thing to do.
Much of what is interesting is the various tactics that the bandits use to get the drop on the handful of people who are holding out in the bad times.  A number of these people are of a survivalist temperament, so they make tempting, if often well armed targets.  Most of the people they are going after put at least some thought into their security.  If they didn't they wouldn't have lasted that long.  But the gang is often able to take advantage of peoples, kinder instincts.  People who were given a little help by someone, will give them information in exchange for food.  Other times, they can use some variations of Trojan Horse tactics, to get surprise.  Most groups simply aren't up to the task of stopping a well planned attack by skilled people.  It is pretty funny, because in the many prepper-style apocalyptic novels, the tactics would work extremely well against most of the survivalists portrayed.  If there is a general tactical flaw in these prepper's defences, it is too much reliance of a single hard point, with maybe one auxiliary oversite post.  As we commented back some time ago on fortifications, skilled troops can generally take strong points fairly readily once they loose their flanking forces.  Here there are usually no flanking forces by design.  One particular location, has Mr. Rawles' Patriot folks written all over it.
Did I like the book?  Yes, in a number of post-apocalyptic stories, the bad guys are more interesting than the heroes.  This book cuts to the chase by following along with the bad guys.  The book does change its focus somewhat about 3/4ths of the way through and become a more "entangles" story, and as is common with these stories, the level of collapse seems to vary from time to time.  So while the ending fades a little, it is the way the author ties up his right versus wrong theme, and he actually does a pretty good job of it.  Bad is bad, but good is overrated at times.
We now come to our two descriptive (not qualitative) ratings: 1 to 7 with 4 the mid-point and 7 high. Realism does not include the cause of the collapse or apocalypse, but is otherwise an assessment of how close to today's world is the setting. Could you imagine your friends, or families living through the situation. Readability is not literary merits, but literally how quick and painless of a read.
Realism: it is in the here and now, or at least the here and now after everything falls apart.  Supplies are a major issue, and injuries are to be avoided.  There is no over the top heroics.  Just a lot of desperation.  Some of the bad guys at the end are a little over the top, but I would still say it is a 7.
Readability: it is relatively short, and at times a page turner.  There is a fair amount of action, or at least working toward setting up that action.  It is a 6.

Whoops, I pressed the wrong button and deleted Francis' comment. He said something to the effect that he agreed that the bad-guy angle sells it. Sorry about that Francis.

I particularly like the way the author presents the tactical challenge (as if to ask "how would you do it?) before the bad guys go in.