Thy Kingdom Come: A Review

Simon Morden's They Kingdom Come is a series of linked twenty short stories that involve simultaneous apocalypse in progress.  On one side of the world a young boy in Nebraska is growing up in an increasingly dystopian globally warming world.  On the other side, in Europe, they are taking the fast road to hell, via nuclear terrorism.  Although I received my copy as a limited addition with author's proceeds forwarded to charity, the book has been made available on a creative commons license here.


The Front and back covers. 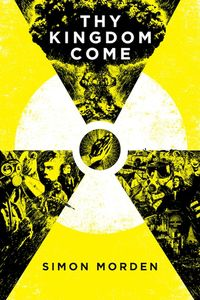 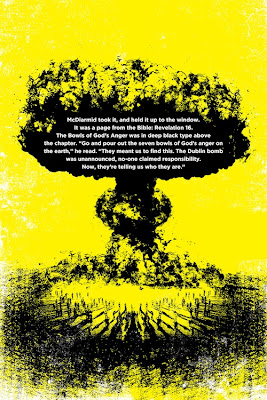 Simon Morden, with degrees in  both geology and planetary geophysics, is one of the more educated fellows writing science fiction.  He works part time as a teaching assistant for a design technology class at Gateshead (U.K.) primary school.  In 2009 his school won the Rolls-Royce Science Prize in their age group. He is the editor of  the British Science Fiction Association’s writers’ magazine Focus.  As an author of fiction,  he has two collections of short stories, and six novels, being best known for the Philip K. Dick Award winning Metrozone series, the Petrovitch Trilogy (U.K.) plus one, which is set in a post apocalyptic London.  Thy Kingdom Come is to some degree a precursor to that series.   A series of essays by him can be found here.  When not doing all this he lives on his easily-defendable hill-top house in Gateshead U.K. (eastern coast Somewhat near Scotland) with a fierce lawyer (his wife), two children, and two cats.


There are two primary plot threads, not exactly interacting, but connected in a thematic way.  The first thread is the reasonably quick collapse of Europe under the onslaught of Apocalyptically inclined religious fanatics who have managed to get hold of a fair amount of ex-Soviet munitions.  The fanatics are intentionally left vague as to their exact religious affiliation, although an end seeking Christian or Islamic (Jewish Apocalyptic types being thin on the ground these days) disposition would fit the bill.  They go so far as to state that they know that they are damned for their actions, but that they are willing to make the sacrifice to end the tragedy that is the modern world.  They are clever and sneaky, and pretty much put things to ruin before the impetus of their initial attacks is slowed, and then sputters out.
The second plot thread is in the remote, particularly to the English author, Plainview, Nebraska.  Here we see a different sort of reaction to the modern world, a fundamentalist, rules-obsessed effort to return society back to normal.   Viewed from the eyes of a young boy moving into his teenage years, we see the slow rise of the Reconstruction Party.  Although not as overtly violent as the mid-20th century fascists, there is an obvious parallel.  People who don't behave according to the societal norms, as laid down by the party, have their life made very difficult for them.
In general both plot lines started out well, and eventually started to slowly unwind.  The Reconstructions never quite turned things into a major-league Nazi-like dystopia, and the terror in Europe became a series of oddly tangled personal stories that didn't move the overall theme forward much from the first few chapters.  The individual stories are interesting, and personally I enjoyed some of the turn to a more cyperpunk reality.  The plausibility of the some of the cyperpunk elements was a little unlikely - cybernetic hot-looking guard nuns?- but fun is fun.
As a whole the novel/collection is worth its notoriety.  That a few of its themes may no longer seem as relevant today as they did when it was written, is probably unavoidable.   That the author has made it free to the public means that their is little cost other than time.  For those who like the apocalyptic genre, it is well worth the time.
We now come to our two descriptive (not qualitative) ratings: 1 to 7 with 4 the mid-point and 7 high.  Realism does not include the cause of the collapse or apocalypse, but is otherwise an assessment of how close to today's world is the setting.  Could you imagine your friends, or families living through the situation.  Readability is not literary merits, but literally how quick and painless of a read.
Realism is mostly straightforward.  It is set in the contemporary world, and the actions are those of normal people in very stressful times.  There are issues of food, and law and order in the European setting, and how to survive dystopian society law and order in the U.S.  The last little bits in Europe start fading into a more sci fi style of realism, but that is relatively late on.  I'll deduct a point for that, leaving it at a 6.
Readability is a bit difficult, because the two plot lines have a very different feel to them.  The U.S. storyline is about the rather dull and mundane onset of a rather banal evil, and moves a bit slowly.  The European setting moves quicker, with a lot of switches in settings and characters.   The European characters don't necessarily even survive the ending of their little story episode.  Taking the two elements and averaging them out, I will say that it is a 5.