The American Book of the Dead: A Review

Henry Baum's American Book of the Dead (Amazon, Amazon.UK)  is an apocalyptic novel that tells of the run up to, and destruction of 99.9%+ percent of the earths population in a World War 3 that was intentionally triggered by conspiratorial forces that include the  President of the United States.  Although, there is an American Book of the Dead 2 that may be bought separately or as a package with this one, this novel works well enough as a stand alone story. 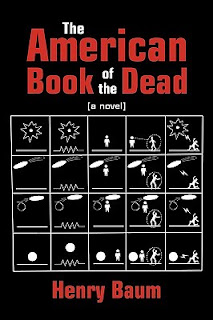 Henry Baum was raised and lives in Los Angeles, which may explain why his first two novels, North of Sunset, The Golden Calf, poke fun at Hollywood.  This novel, in a rather satirical fashion, that has been described as a cross between Philip K. Dick, and the conspiratorial musings of Robert Anton Wilson, takes on the apocalypse at the juxtaposition of the Apocalypse of John (aka Revelations), World War 3, and Area 51.  It also reminded me of Kurt Vonnegut's, Breakfast of Champions, with its narrator-audience cross-talk.

A difficult novel to summarize, but we here we go: a  middle ages professor in Los Angeles becomes privy through a serious of dream sequences to an apocalyptic plot to depopulate the world sufficiently to make it nice and comfy for a chosen group of folks in 2040.  Through dream-transmission, he attempts to warn the non-select of impending doom, and send them to areas of safety.  Based on the final survival count, he has limited success.  Sound straightforward?  What makes it confusing is the narrative conceit that all of what is happening to this professor, was written down in a novel in 2008 written by his younger self, and that it was an even older self (presumably who is living in a period past the time frame of the book) is influencing the young author (in 2008) so that he will get the story "right".  As the narrator has three active levels within the story, and two of the three are somewhat aware of the process, you have all sorts of story and time loops going on.  Is the author creating the story, or recording it?  If the author is creating the story, than who is at fault?  The conspirators, or the author?

The hero of the story, Eugene Meyers, is a sad sack professor who fairly early sees his barely legal daughter acting in a porn movie online.   A little bit of time is spent with him, mostly unsuccessfully, confronting this situation.  Beyond the shock value, it is the main introduction point of the social collapse that has occurred within the United States in 2040.  As a counterpoint to this Sodom and Gomorrah atmosphere , the country has elected a religious, crusading president to clean up the mess.   Unknown to the country, he has decided to clean it all up by bringing about a biblical end times.  The president seems to be loosely based on President George W. Bush.  While he is portrayed as a rather dim bulb, he has the support of a number of people, including his powerful father, who are working toward an end times to their own purposes.

I won't go to much further into the plotting.  It is confusing enough that at one point I accidentally skipped a few chapters and didn't even realize it until I had read through two more chapters.  I think a typical reader is going to be in a semi-state of confusion much of the time anyway.

The intent of the novel (based on this interview) seems to be to explore the intersection of religion, fanaticism, and violence.  I am not sure it really succeeds.  The President's father, who engineered much of the war, and who wanted to push a non-doctrinal, global belief structure fades into the background at the end, but seems to have been somewhat vindicated by events.  As Paul Brians sarcastically noted in Nuclear Holocausts: Atomic War in Fiction, one of the primary outcomes in fictional nuclear wars is that people become telepaths.  That is not exactly what we have here, but we definitely seem to have the "higher consciousness through holocaust" meme going on here.  All of this is well and good, and it is all very nice to propound on the idea that we should be thinking "outside of the box" to solve our problems.  But thinking outside the box takes a lot of discipline if you are not simply going come off as unhinged.  I don't see much discipline here.

Did I enjoy it?  Not particularly, but I didn't hate it either.  I definitely saw the Robert Anton Wilson influence, and possibly someone who is deeply involved in his Illuminatus! Trilogy might find this novel interesting.  There were a lot of clever conceits, but most of the characters were either not particularly interesting, or were not deeply explored.  None of them were real enough to create a belief in the world to where you were concerned with the outcome.  That leaves you with some fuzzy headed philosophizing that often starts out well enough, but is too loosely spun to maintain its coherence.  I am going to be presumptuous and presume that the author has a rather loose attachment to reality, which tends to make his satire fall flat.  A novel with a 2009 copyright, the year that Bush left office,  is beating him up through a satirical carbon copy  for starting World War 3 in 2040?  Since we are not too worried about relevance, why not bring in Kennedy and the Cuban Missile Crises while we are at?  At least then we could play footsies with Marilyn.
We now come to our two descriptive (not qualitative) ratings: 1 to 7 with 4 the mid-point and 7 high. Realism does not include the cause of the collapse or apocalypse, but is otherwise an assessment of how close to today's world is the setting. Could you imagine your friends, or families living through the situation. Readability is not literary merits, but literally how quick and painless of a read.
Realism?  There is magic, there is even a bit appearance by some elves, and leprechauns.  There are newly created string-theory nukes that vaporize people, but do nothing else.  There is a tiny amount of lip service paid to stocking up supplies to ride out the coming storm, but it is the easiest survival scenario imaginable.  It is a 1.
Readability?  I started the novel, got about 50 pages in, and stopped.  I picked it back up because I wanted a fourth novel for this series of reviews- and figured I could gut it out. In that I succeeded, and I didn't particularly dislike it.  But a book that I voluntarily put aside for possible finishing later, is by definition a slog.  The biggest problem is the squirrelly time line, and confusing sequence of events.  It is a confusing, difficult read:  a 2.
Posted by russell1200 at 7:00 AM

Francis: I am guessing it is the Robert Anton Wilson influence. There is the point where thinking outside of the paradigm is more silly than helpful.

Sounds kinda like that Middle East war novel (I forget the title) where the Christian forces general gets double crossed by the Muslim one and the moderate professional general takes the blame.

Only on a global scale of course :)

Pioneer: I think you are thinking of Ralph Peterson's "War After Armageddon". The Christians in that one were cynical, not delusional. That was modern day military adventure, this one is the Illuminatus! Trilogy a little watered down, with a heaver emphasis on apocalypse. I think I prefer this one just a little bit more, but it is a very low hurdle.