Who needs that hard to find .22LR ammo anyway.  Everything is going sustainable, and you can't get much more sustainable than home grown ammunition.
Yes, higher powers are showing an interest in the potato gun.
Potato guns are air cannons.  Back when the best thing they could put in a shell was dynamite, they used to use really large air cannon to slowly accelerat the shell down the barrel.  New York was protected by a large (10" caliber ? I think) air cannon that would lob TNT at any invaiding fleet.  So the idea of air canons is sort of a new, old idea.

What is a little new is the potato thing.

The workhorse projectile launcher for physics demonstrations and a certain kind of hobbyist is the potato cannon. A common design involves using compressed air to accelerate a lump of potato out of a tube...

But a question that will have passed through the minds of many hobbyists is: what is the best fuel for a potato cannon? Today, they get their answer thanks to the work of Michael Courtney at the United States Air Force Academy in Colorado and another Courtney at BTG Research in Colorado Springs. 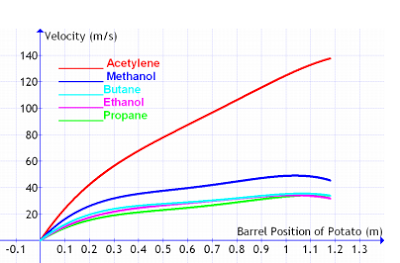 I only heard and saw a potato cannon on an episode of Mythbusters last month.....they're excellent!

Sooo...the next ban would be on potato ( presidential spelling- potatoe )propellant? Its for the children.

Never shoot an avocado out of a potato gun.

first off - you lazy americans dropped the "e" off of potatoe, tomatoe, volcanoe - stop that! those words have an "e" on the end of them.
and next - the idea of firing potatoe cannons will not only p*ss off vegatarians - it will p*ss off me which is worse!!! throw rocks for the love of all that is holy. potaoe cannons? wasting beautiful potatoes? that is pure blasphemy!

Francis: If memory serves me right, they had a pumpkin shooting competition that got so out of hand they had to cancel it. They were firing the succors for miles. The actual dynamite guns (as I believe they were called) would make a great steampunk item for a miniatures game.

Jim: Not if they are bolt action or breech loading.

Kymber: No "e" is Webster who was trying to "rationalize" spelling. We may be, but Webster was anything but lazy. As per the whole vegan deal, see reference to pumpkin chucking above in response to Francis.