Albert Brook's 2030: The Real Story of What Happens to America (Amazon, Amazon U.K. )is a dystopian story of an earth quake in Los Angeles  against the backdrop of a United States so bankrupt that it cannot pay for any repairs, and a population of medically assisted boomers who just won't go away and die. All of which builds up toward a political turning point that might be called apocalyptic. 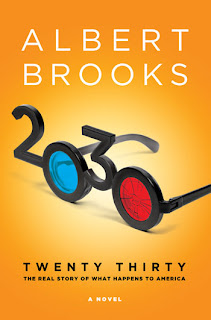 Albert Brooks is a famous comedian,  actor, film writer and director.  He received an academy award nomination in 1987 for veteran TV correspondent/reporter Aaron Altman in the movie Broadcast News.  He is, to put it mildly, famous. This is his first novel.
As our story begins, we see a vacuous wealthy, and older population, living the better life through holograms, and other technical gadgetry, and a younger population being taxed to death to pay for their elder's lifestyle.  The generational dystopia has been somewhat done before. David Brin's Earth back in 1990 comes to mind.  Brin set his narrative in 2038, and Brooks gives global warming a cameo appearance, so there are some interesting parallels. between the books.
In our near future world, the elderly, by virtue of medical discoveries that increase lifespan (cure for cancer, et al), lead by the AARP (American Association of Retired Persons), now so dominate civic life that younger folks are overtaxed, over in debt, while still portraying the sort of cluelessness and entitlement that middle-upper class Americans tend to portray today.  Some of the economic foibles, don’t completely make sense.  If retirees are just hanging out and living off their government provided support, than why are aren’t their more jobs for the under-represented youth?  It is a world populated by the middle class.  Presumably the children of the blue collar or poor have already been euthanized or packed off to some reservation
The Chinese are the perfect people.  You would have to go back to the 1980s and the rise of the Japanese economy (before the big bust) to see such laudatory praise.  That, in the real world, the Chinese have their own aging bubble, just a little behind our own, to worry about, and that theirs is much larger is beside the point.  Somehow, the Chinese have become the technical wizards of everything.  Granted, in twenty years, the Japanese went from being known for making cheap plastic toys to first class engineering, and Taiwan itself does some fine engineering, but that does not guarantee that China will go the same route.  Ask the Philippines about Asian Tiger disappointments.  But in our novel here, the Chinese are wonderful.

The Americans are a portrayed as a weak, self centered, and self riotous bunch.  While I wouldn't deny there is that element to our modern culture, there isn't much explanation as to why we are uniquely in trouble.   None of the Americans are particularly admirable.

It is possible that the author intends it all as a satirical sendup.  There is a bit of humorous flippancy that lightens the proceedings. But it all inhabits a sort of muddled middle ground.  You can have a satire that ennobles the downtrodden at the same time as it pokes fun at them.  Toole's Confederacy of Dunces is possibly the ultimate classic for pulling that off within that dystopia that is called reality.  But within our novel, if there is nobility to be found anywhere, to the point that  the not very veiled, the authoritarianism of the Chinese seems an appealing alternative.

Well it did get good reviews in the New York Times .  They note that "it’s as purposeful as it is funny."  I would suspect the possibility of there being an acquired taste for this sort of thing if it weren't his first novel.  Maybe the reviewer wants an invite to his next dinner party?  If that seems a harsh assessment, than you have a pretty good sense of the tenor of the novel.  The novel is centered right at the heart of American Un-exceptionalism.  All motives are tainted, all are suspect, mediocrity reigns.  The Archdruid had a nice little discussion about religion, and their close cosines, civil religions, the other day.  He noted that many civil “religions” (non-theistic beliefs that have religious qualities to them) as with  most theistic religions have an anti-religions. Anti-religions go to extremes to take the polar opposite view of their counter party. So if their is a civil religion of “American Exceptionalism” that was once common. Then there will be an anti-religion that has absolutely everything that America does being wrong and evil.

“The civil religion of Americanism, for example, has as its antireligion the devout and richly detailed claim, common among American radicals of all stripes, that the United States is uniquely evil among the world’s nations. This creed, or anticreed, simply inverts the standard notions of American exceptionalism without changing them in any other way”. from The Archdruid Report: The Fate of Civil Religions, 3 April 2013.

I think this bias goes a long way toward explaining the good reviews in the New York Times .

For myself, I am somewhere in the middle ground.  The United States is a big, powerful country, and that is not going to easily change.  But I don't particularly buy into the view that we will return to a once glorious past if we just fixed our political/economic situation. I think our country has had some good moments, but the concept that much of our past was particularly glorious, requires a fair amount of self editing. So while I found some of Mr. Brooks barbs humorous, I also found them to eventually be more tiresome than funny.  And at the point where the novel isn't funny, the completely over the top plotline starts to loose any real purpose.  Satire that is dull, is not effective satire.  If you wanted crushing satire that covers our current situation, you would be much better off reading Gone Girl.
We now come to our two descriptive (not qualitative) ratings: 1 to 7 with 4 the mid-point and 7 high. Realism does not include the cause of the collapse or apocalypse, but is otherwise an assessment of how close to today's world is the setting. Could you imagine your friends, or families living through the situation. Readability is not literary merits, but literally how quick and painless of a read.
Realism:  It is close to our contemporary world, people are broke, and getting broker.  I don't buy into some of the political setup, but remember the cause-of-collapse (coc?) doesn't count.  To the extent there is satire, satire tends to stretch a current truth to make a point.   Novels that tend to spend a lot of time in the Whitehouse tend to loose a little touch with reality as well.  Still above the mid-point at a 5.
Readability:  There is not too much in the way of deep symbolism, or if there is, it was too deep for me to notice.  The author wanders around through the barren lives of the various protagonists, some of them extremely peripheral to the actual main plot line, so it is not by any stretch a page turner.   Again, it is a 5.